Joan of Arc and the Fortress of Chinon. Bourgueil Market. 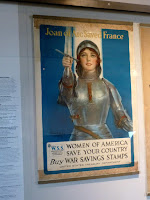 Joan of Arc and the Fortress of Chinon.
Bourgueil Market.

Here in Chinon, where I am based, there is a remarkable fortress with a remarkable history. It includes the Plantagenets. Eleanor of Aquitaine was imprisoned here by her husband Henry II but the woman that dominates the story of the fortress even though she spent just a few days here is Joan of Arc, the teenager who put an end to the awful 100 Years War.
In February 1429, in this very fortress in Chinon (began in the 10th century),  she persuaded the disinherited French king Charles VII to stand up for himself or at least to let her stand up for him and for France. He agreed and it made a king of him and a martyr of Joan who was captured by the Burgundians and handed over to the English who engineered, with church cooperation, her burning at the stake for heresy.

Twenty five years later, the verdict was overturned by an inquisitorial court and the rehabilitation has been going on ever since. The Maid of Orleans, who lived to be just 19, is the French patriot and has been used worldwide as an example of patriotism.
The morning was much more peaceful. Then, we headed up the road to nearby Bourgueil (about 13 km) for the weekly market there. It was packed. It is spread over the main street, some adjoining ones and also takes in a smallish hall.  All over the place and hard (not impossible!)  to get a handle on it as food stalls are mixed in with those selling clothes, shoes, knives, and so on.
We had no bother filling bags. Got lots of local fruit including delicious melons. Also a local goat cheese, after a taste and with some friendly advice to eat it with a dry wine. Lunch too was covered, mine a crispy tasty mille feuille with ham and cheese. Met the man with the beer and wine that we’d seen last week in Chinon and went off with some beer and a large bottle of gorgeous apple juice.
Had been hoping to pick up a good ready-made meal at the market but they seemed in short supply so we fell back on our local traiteur in Chinon and now have a Pork Curry in the fridge for dinner, along with some other bits and pieces that will cover starter and dessert  from Bourgueil. A bottle of local beer is nearing its end and a bottle of local wine is about to be opened.

The sun too has made an appearance this afternoon after a hazy morning that promised mist but delivered zilch. Looks like dining al fresco this evening.