Detained in a French Restaurant!


Detained in a French Restaurant!
What is it about some French restaurants that they seem to want to keep you there all night? The answer, methinks, is understaffing. Our server at L’Ardoise in Chinon, a Michelin mentioned bistro and a busy place, was worked off his feet and, despite valiantly trying, could hardly be expected to keep up with the demands of about fifty persons in our downstairs section.

Delays just got longer and, while I didn’t time ours, the couple next table did and said they waited fifty minutes for dessert. We had to struggle to get dessert and the bill and then the credit card machine before escaping into the dark and a night-time temperature of 24 degrees.

On top of all that the menus were on big blackboards. Okay. But when customers came in you were trying to look through them to see what is available and besides the server has to explain the menu to each new arrival. Time wasting and crazy. What not have the regular menu on paper, the specials on the boards? Even the way the wine was handled was awkward. You had to go down to a display of bottles to pick your red and then to another display to choose white or rose. Never seen anything like it.

Yet the food, aside maybe from the desserts, was good. CL’s starter of Foie Gras Poele sur son Carpaccio de bouef and my Mille Feuille avec sentures de maquis and chèvre were quite satisfactory if not outstanding.
We each had the same mains and this was the highlight. It was Knuckle of Lamb cooked for 7 hours and served with rustic potatoes. Really gorgeous. And the wine, a Chinon Red 2012 (18 euro per bottle) wasn't bad either. 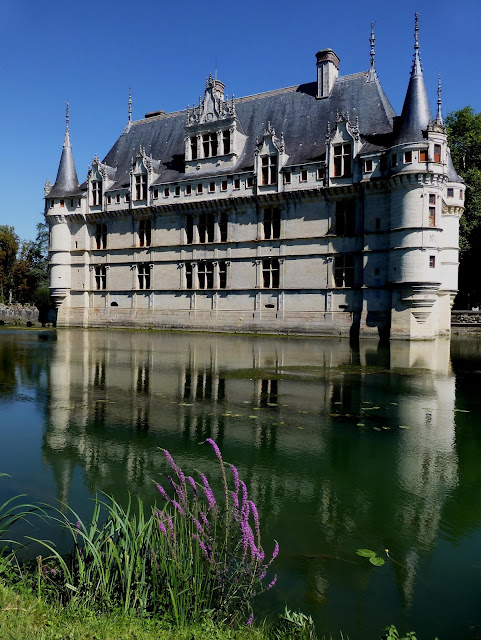 The main visit today was to see the 16th century Chateau d’Azay de Rideau. It seems that many French also made it their day to visit and the place was busy but far from uncomfortably so. Built between 1518 and 1527, this château is considered one of the foremost examples of early French renaissance architecture. Set on an island in the middle of the Indre river (a tributary of the Loire), this picturesque château has become one of the most popular of the châteaux of the Loire valley.

The huge building had to have its king’s room and that forms part of the tour and Louis XIII and Louis XIV stayed here. Quite a lot of other impressive rooms here also, including the Billiards Room! Didn’t get to stay in the King’s Room but did enjoy a lovely lunch in the nearby Creperie du Roy. 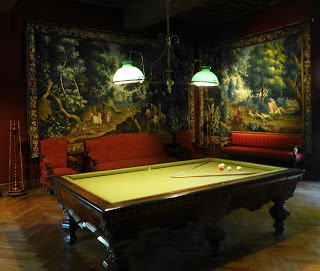 Headed off then to nearby Sache which is known as the town of Balzac, the 19th century novelist, and we saw his chateau and also the 12th century Auberge where he came for a drink or two. The Auberge is still going strong but today’s menus are on the expensive side. Another well known figure, the 20th century American sculptor Alexander Calder, also called this town home and one of his large mobiles dominates the small town square.

We also paid a visit to Villaines les Rochers. Since the Middle Ages, willows from the local river valleys have been made into baskets, anything from fruit holders to baby carriages and even bigger. Must say that I was fascinated by a tour of the local co-op and there are three or four other enterprises making baskets and related items in the town. 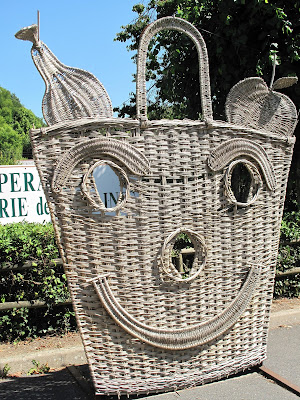