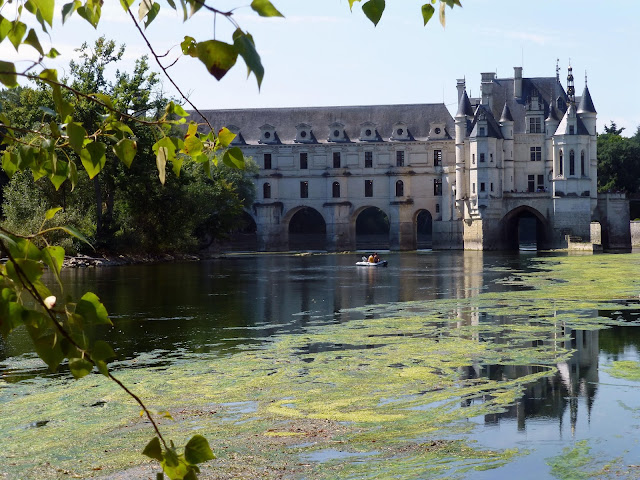 No problem with planning permission in 16th century. Just demolish most of the existing structure and build your own. That was how Thomas Bohier and his wife got to build the fantastic Château of Chenonceau that now straddles the River Cher in the Loire. 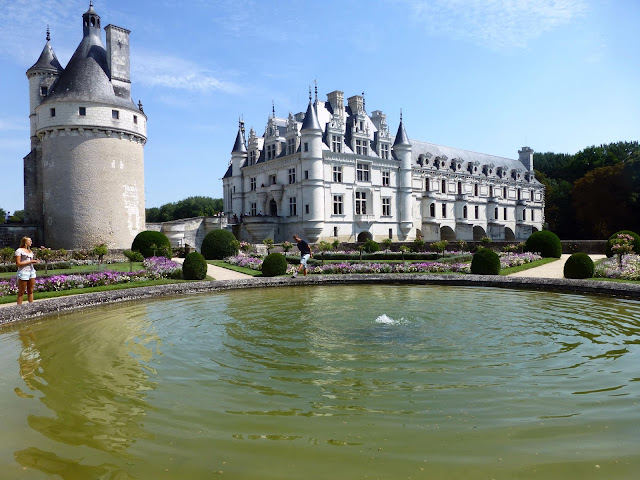 It is one of the loveliest of the Loire chateaus and also one of the most popular. Big crowds there in the heat today (31 degrees at one point) but the system works and you get good value for your eleven euro, thirteen if you include the Wax Museum as we did. You also get to see some marvellous gardens, a 16th century farming village, a maze, a picnic area (in the car park) and more.
Catherine Briconnet, the wife of the first owner Thomas Bohier, was the first of a chain of strong willed women associated with Chenonceau. Others included Diana de Poitiers (a favourite of Henry II), the Henry’s widow Catherine de Medici (who topped Diana’s bridge with a gallery) and Louise of Lorraine who on the death of her husband Henry III dressed in mourning white, decorated her room in black and spent the rest of her days in prayer.

And there were more fascinating ladies right up to the 20th century when Simone Menier was in charge when two galleries of the chateau were transformed, at her family’s expenses, into a hospital for the wounded of the Great War. During World War 11, Chenonceau was on the line of demarcation and then Simone carried out numerous actions for the resistance. Simone, who died in 1972, was a member of the Menier family, the chocolattiers, who bought the chateau in 1913 and still own it today.
You don’t have to pay to view the exterior of Chateau. You are free to stroll along the river banks. Perhaps the best way to see it is by boat. Some people arrived by canoe while we were there. And so too did a family on a rib. They cut the engine as they viewed the impressive building and then had trouble starting it. The man tried a few times without success and then really put a bit of muscle into the effort, so much so that he fell backwards into the water! But no problem as the river is very shallow at this point.
You could spend a whole day here, especially if you are interested in gardens. We were fascinated by the flower and vegetable garden. But you will be well catered for with a number of restaurants, including a self service and a creperie plus a gourmet one in the Green Garden. And there is also a nice ice cream stand there.

It is all very impressively organised. We had no problem finding our way around with the help of the  leaflet that you get in your own language on the way in. It is full of photos and information on the various rooms and gardens and the map is brilliant. Must say this was one of the best visits I’ve ever enjoyed and well worth the thirteen euro.