BeoirFest 21 Kicks Off With Stout And Porter. Experts from Dungarvan Brewing, Kinnegar and Trouble onstage.

BeoirFest Kicks Off With Stout And Porter.

Coconuts on a Donegal beach! That idyllic image was floated by Rick from Letterkenny based Kinnegar Brewery during the early stages of last weekend’s online Beoirfest.  Rick was joined "onstage" by Cormac of Dungarvan Brewing and John of Trouble Brewing.

Stout and Porter was the subject of the hour-long discussion and it threw up some very interesting points. Kinnegar’s Yannaroddy Porter is rich in traditional dark roasted malt flavours laced with an exotic streak of coconut and no, they don’t turn up on the local beach.

Organiser Brian had started the ball rolling by asking what was the difference between Stout and Porter as he, like many of us, are regularly puzzled. Johnny quickly declared it was nebulous. Rick: “We don’t stick to historical definitions but Yannaroddy is more akin to porter.” He also said that being classed as porter takes it out of the shade of Guinness stout. Johnny remembered: "Yannaroddy was one of my first tastes of craft beer… super rich." 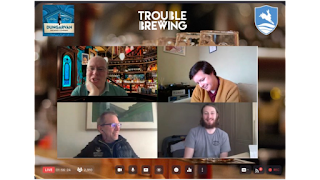 Coconut, plus a question from the "audience", quickly led to talking about other additions. Cormac warned that the use of adjuncts must be subtle. “Barley gives plenty of flavour.. you don't want additions to take over.”

Johnny agreed and indeed all three spoke about small margins and trail and error. Not too much trial and error with Trouble’s Dark Arts Porter, one of their original recipes and “still going strong”. “No roast barley, it is porter, on the lighter side, great for a session.”

Rick said he was a big fan of Dark Arts. “Both versions drink nicely..classic easy-drinking..very enjoyable.”

Rick added that Stout and Porter accounts for 5% or less of the Irish craft market. “The general Irish interest in Stout doesn’t translate to the craft sector.” 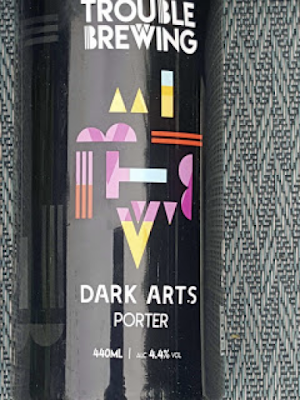 Cormac agreed: It’s not going to be the biggest seller in the range. But as a brewery, you like to have the full range to keep it interesting. It’s part of a huge variation. Very boring if we all went for fashion. Keep it interesting!”

Rick agreed: “it would be a very meagre landscape if it was just IPAs.”

Cormac then told us about his winter stout, the rich Coffee and Oatmeal Stout that they’ve been producing for the past ten years. "We get the oatmeal from our neighbours Flahavan’s for its creaminess. The coffee, and it’s a different one each year, comes from Badger & Dodo roasters. There’s usually a bit of trial and error as we try to find the sweet spot. The beans that produce a nice cup may not necessarily work well in the stout blend."

Johnny really loves this one: “The oatmeal is spot on ..not too much coffee.”

Rick said balance is so important: “You don't want overwhelming flavours - happens a lot at festivals. Of course you do want a flavour experience but you also want a social experience - you don't want to be kicked in the head all the time!”

Then Cormac told us that Dungarvan were experimenting with cans (even can conditioning!). They started by bottling everything, then added cask and, locally, keg. Now it seems it's time to go canning. “Cans are huge… let us try can conditioning and see how it goes. Interesting!”

Seems to be going well. Rick had one of their very first cans and declared it tastes wonderful.

Next week Brian has Canvas, White Hag, and Black Donkey lined up for a chat about yeasts and sours. If you want to sample of the beers they'll be bringing, get your hands on Liminal Barrel 26, Púca, and Sheep Stealer.

Brian is using a platform called Airmeet that also allows a lot of interaction so remote punters can ask questions and win beer and kit. Check it all out here.