Brewers Chat About Hops and IPA on Beoirfest

Brewers Chat About Hops and IPA on Beoirfest

Ronan Russell of Blacks Kinsale, Cris Gasporoti of Hopfully and Brian Kelly of Wicklow Brewery had a great chat, moderated by host Brian O’Connell, on a recent Beoirfest edition where the subject was IPA and hops. And a further distinctive flavour was added to the conversation when hop expert Will Avery joined in as guest.

Will: “I don’t claim to be an expert but I like hops and have acquired a lot of knowledge over 15 years in the business. There is a historical conundrum in that a secondary aspect of hops, its disinfectant properties, brought it fame. But there has to be something to balance the sweetness in beer and hops did the trick, before that there were herbs. That the alpha acid of hops was a deterrent to various bugs was an extra bonus.”

Ronan Russell took on a request from host Brian to explain IPA, a task getting more difficult by the day with so much variation around. “The term has been expanded away from the original meaning over the past 10 to 15 years. IPAs are not what they used to be and now there are many sub-categories not focused on the bitterness. But IPA should be a juicy smooth ale that lets the hops shine through the malt, more than is the case in stout for example. You can write IPA on virtually any can or bottle these days, some do it so the punter will pick it off the shelf.”

Cris said there are different styles such as West Coast and New England and craft drinkers know what to expect. “There are lots of choices but it is good to be aware of the styles.. and the label should mean something.”

Ronan agreed that the label should be accurate, “should point you in a certain direction. The front of the can just wants to grab you but there should be a few hints on the back.” He grew up in Belgian - “lots of sweet beer there”. Now he likes the hazy beers, which Kinsale do well. “Lots of malted wheat and oats.. a richer mouthfeel…juicy and full-bodied… aromatic including floral.”

Not too sure Will would fully agree! Later in the discussion, he said he was tired of drinking beers with Citrus and Mosaic “…. A lot of New England IPA are just sweet,.,. start well but finish flat… You gotta have contrast (Amarillo or Comet). If all you get is juice, you don’t really appreciate it, you gotta have contrast to lift it!”

And there is no shortage of hops. Will said there are dozens of well-known ones but hundreds of others “you’ve never heard of”. Like Comet (which Cris uses well in his beers, eg Quicksand and Shinebright); this is an old-school hop that can provide a lot of flavour and can complement the likes of Citra.

Cris agreed but there is much to understand, the amount of oils and what they do in the brew. “I have done a lot of pilots but there is a bundle of complex stuff that is important to understand.. a lot to learn ...” 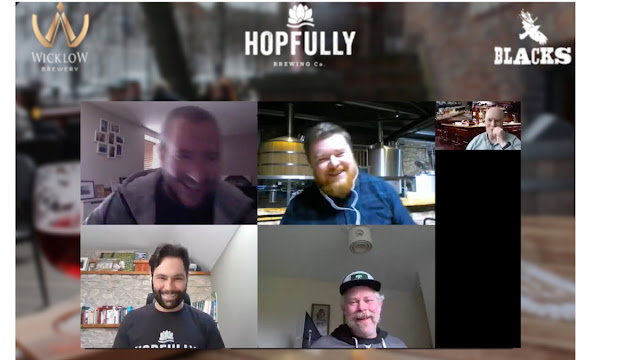 Will emphasised that farmers “will plant what they can sell” and will quickly shift to what is in demand. And that could mean certain old-school hops, even more recent ones, could fall out of favour (for instance, you get 8 bales an acre from Citra, 13 to 16 from Cascade or Centennial). Prices could rise for the popular ones and the less popular ones would be even harder to get. And so he underlined the importance of brewers continuing to use a range of hops.

Ronan confirmed the trend towards newer hops.”New varieties, eg Strata, are very popular and it is hard to look past them.” But he agreed that “old” varieties must not be neglected. And Cris nodded: “our job is to use old-school hops.” Hopfully, by the way, have all their beers produced by Waterford’s Metalman. They earn great praise (I’ve enjoyed them here in the Quart of Ale series), not least from fellow panel-members at BeoirFest.

After messing up the home kitchen more than once, Brian Kelly  “jumped at the chance” when the opportunity came up to work in Wicklow Brewery in early 2016. “I quit my job and, I have never been more excited to clean floors in my life. Eventually I began brewing and my passion became a job. In May 2017 I became Head Brewer and I oversee all operations from grain to glass.” 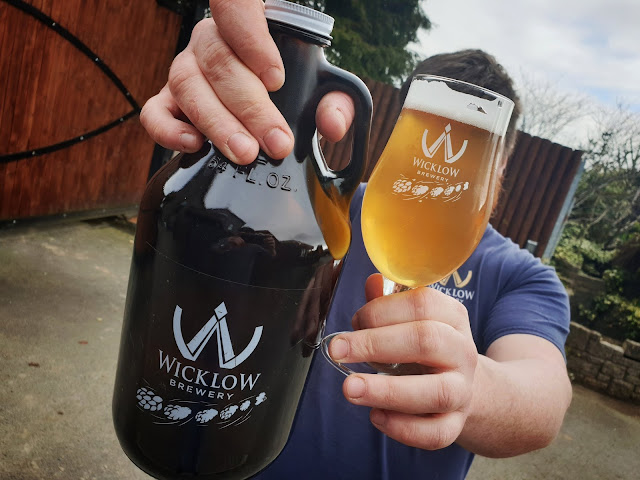 Brian was comparing making beers with fruit additions with the others brewers with Will warning that “doing Mango is not for the faint-hearted!”

Wicklow make a full range including a WB-40 Dank IPA that sounds more or less West Coast to me. Don’t think I’ve had one of their beers since a visit to Brooklodge in 2015!  Haven’t seen their bottles in this neck of the woods, must keep an eye out.

The next Beoirfest presentation is down for 3.00pm on April 3rd and will feature Craft Cider with Stonewell, Tempted and Legacy providing the speakers. Put that in your diary!