A Quart of Ale± #38. Continuing on the craft trail with a variety of IPAs.

Moving on over to craft with a variety of IPAs. 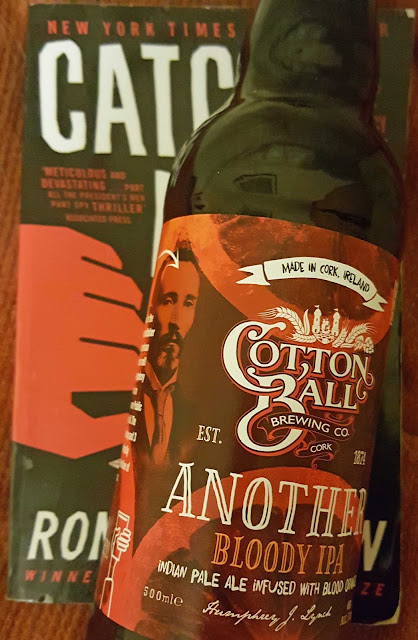 The Cotton Ball’s “Another Bloody IPA” boasts an attractive dark amber colour and a myriad of bubbles, furiously making their way towards a white head that soon loses much of its early “bulk”. The aromas are strongly citrus, no surprise considering that they use blood orange zest and peel as an adjunct.

Quite a rich and flavourful mouthful with that Blood orange a light and pleasant (rather than forceful) presence. Biscuit malt gives it, yes, a biscuity flavour, and is quite a factor here.

This is what the brewery has to say:  “This isn’t just another IPA, this is our bloody IPA . Our blood orange infused IPA with a mixture of biscuit and Munich malt to give this beer a pleasant malty undertone.A full bodied IPA with a medley of USA citrus based hops, which is infused with blood orange zest and peel to create a fantastic citrus aroma.”

The Cotton Ball brewery is less than 200 metres from my house but my pleas for a direct pipeline have fallen on deaf ears! At least, their off-licence is open and the beers are otherwise widely available.

Growing up in the bar trade, it was always Eoin Lynch’s dream to put his own stamp on the well renowned Cotton Ball Bar (which was founded by his great grandfather Humphrey in 1874) and in 2013 he established the brewery in the basement of the historic pub. The brewery has taken on a life of its own and their beers are stocked far and wide on the island of Ireland and even in some other European countries.

The collaborating brewers, Wolf and Dot, have an out of this world sense of pun. Astronomical. Intergalactic. Space age. Well yeah, this is (still) the age for all three. And then there’s Cosmic Hops. Really? Galaxy, Strata and Milky Way. Oh sorry, Comet, not Milky Way. Just got my chocolate bars in a melt.

I suppose you could say, you wouldn’t be the first, that the hops are the stars of the show. The chocolate and coffee come through and there’s a pretty decent balance and a genuine bitter finish.

If you’d like to explore the style, why not start at normal strength. Perhaps check out the excellent 5% Kinsale Black IPA (by Blacks, of course).

Colour’s a lot like unclear lemon juice, a murky one, and the head is slim and won’t be around for long. Hops dominate the nose.  And on the palate as well, those exotic fruits are to the fore, with mango leading the posse. Smooth and fruity all the way to the satisfying dry and bitter finish. Much more muscle to this one than the 3.5% abv suggests. Chalk it down for those sessions.

No point in looking in on their own website. No beer info at all. Their site just wants three hundred of your euro to continue their work. The label’s more helpful: easy drinking, bright and light. A fruity hop forward New England session IPA. Tropical fruit aromas. A healthy bang of Amarillo and Galaxy hops. Super smooth.

A general web search finds agreement that it is brewed with New England yeast without the murky but retaining all of the big bright stone fruit characteristics offset by a healthy dose of malted and flaked oats for a medium body / velvet mouthfeel. A double charged dry hop of Amarillo / Galaxy for a super tropical fruit bowl aroma. Hints of peach & pineapple. Finishes with a light dry bitterness.

Contradictions abound. It is not bright. It looks

muddy. It is not without “the murky”, it is as murky as a welly disturbed woodland pond. It is however smooth and satisfying, no shortage of hops and no doubt a contender for your, and my, session nights. More than happy to have one in my fist and at least one or two more in the fridge. 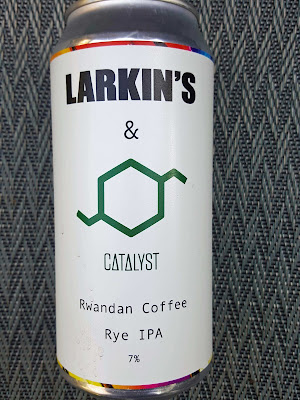 This limited edition from Larkin’s, with the coffee roasted by neighbours Catalyst, was a lovely surprise. It has a murky orange colour. There seems to be a fair bit of carbonation present. And, yes, the aromas are of coffee. This is a complex mouthful, a smooth one too, where the harmonious combination of the hops and the coffee characteristics is rather impressive, something special. Exotic citrus stuff from the hops give bitterness enough with fruity notes from the coffee, notes (plum, apricot) I’d be hard pushed to find in the cup. A good deal better than I expected.

They say:  We teamed up with the coffee masters in @catalystcoffee_ in our home town of Bray for this collaboration. We chose a coffee from Rwanda this time round which gives hints of chocolate on the nose and a really velvety smooth flavour on the palate. Cold brewed so don't expect this to be a dark bitter coffee experience. It’s subtle and gentle and balances with the hops and malt rather than trying to over power them. Limited edition.