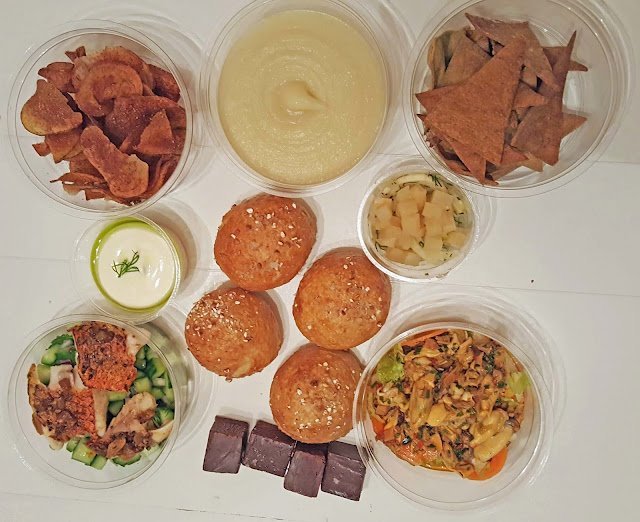 We’ve been doing really well with our Click & Collect or At Home meals over the past few lockdown months with local city restaurants serving up innovative and often top quality meals and in such huge variety.

We were lucky to get another beauty last weekend, from the folks at Goldie who have been making quite a reputation for themselves as the little restaurant in the heart of Cork City serving fantastic fish with a whole catch approach, an approach that has already earned them a Michelin Bib Gourmand.

Co-owners of Goldie, Aishling Moore (Head Chef)  and Stephen Kehoe, care about what they do and it shows, not just on their fantastic plates. The containers and packaging from last week’s Click & Collect were all compostable.

Quite a few containers here as you can see from the picture. So where would we start? We decided to follow the line of the menu and begin with containers 1,2, and 3 which respectively contained Salt Fish Brandade, seaweed crackers and Goldie House pickles. We were on a winner immediately. Their brandade (an emulsion of sea fish, potato and olive oil )was smooth and quietly though insistently flavoursome. The crackers too were tasty, and practical as a tool for scooping up the brandade, while the pickles added a tart contrast.

By the way, they even supplied their recipe for Goldie House pickles at the back of the instructions. And, just to mention, there is no cooking, virtually no preparation at all involved here. You just can’t go wrong,. Even I can’t go wrong!

After a few sips of the Izadi Rioja Blanco (DOC) 2019, we moved on to the second stage: Prawn Cocktail Crisps with cultured cream. Those crisps were delightful - I reckon they could sell them in bags - and the cultured cream added a nice little tang! Those crisps “are one of our favourite snacks to serve at the restaurant. We use all the shells and heads of langoustines to make a flavourful seasoning..”

More Rioja Blanco as we progressed to Box No 6: The Roaring Water Bay Mussels, with Fish Shop XO Sauce. These are cooked and picked West Cork mussels dressed in the sauce, a deep and spicy Southern Chinese style sauce. Well, put them together and we had quite the treat and here we began to tuck into the Buckwheat & Sea Salt Pretzel Buns, just the job to mop up the remaining sauce from the plate.

There was a suggestion on the leaflet that these mussels could be gently warmed in a pot and served with some egg fried rice for lunch, a good suggestion I’m sure, but they never got that far, all polished off on the night.

Could Aishling beat that delicious dish? Beat is hardly the word I suppose but she and her team certainly came up with an other delightful fish course: Confit of Vindaloo Red Mullet with Kachumber salad (her take on an Indian salad usually of chopped tomatoes, cucumbers, onions, etc). Quite a substantial dish, again full of flavour, beautiful fleshy fish and hints of spice. This little place is doing so much for fish in Ireland and I’m sure there’s more to come from the brains trust here!

Do Goldie do dessert? Of course they do, more often than not with a touch of the sea. And our delight with the coffee was a couple each of their Wisdom Ale & Achill Island Sea Salt Fudge. The ale comes from across the street, from the Elbow Lane micro-brewery (part of the Market Lane group, just like Goldie).

They keep it local here, support local, including  the day-boat fishermen. Goldie is a shining example of sustainability and ethical sourcing demonstrating time and again, in-house and via takeout, that they have the skill and commitment to bring a whole new level to the consumption of fish in Ireland.

And, by the way, that multi-pot dinner cost us just 30 euro, not each but for the two of us! Great food, great value. Check out the box for the coming weekend!

All items are cold and ready to eat, best on the day but can be enjoyed throughout the weekend as part of lunch, dinner and everywhere in between. Perfect for two people sharing.