On the craft journey. 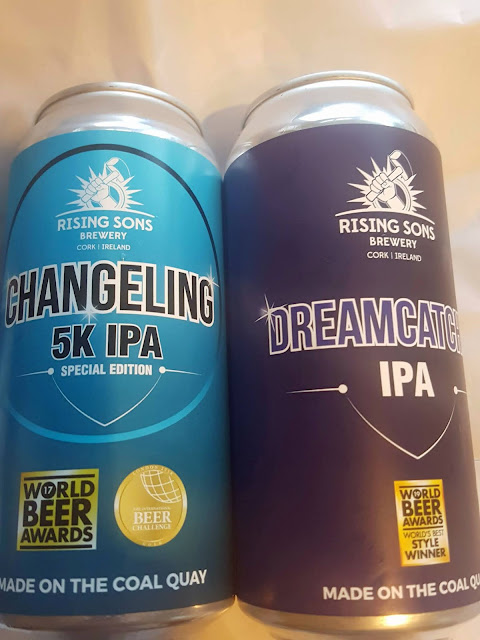 Take 1: So there I was walking down Cork’s Parnell Place, after a quick bowl of soup in the corner shop. There was a guard walking 20 or 30 yards in front of me. Two fellows were approaching him, staggering. They got quite close to him. Too close. He caught each by the hair and banged their two heads together. One staggered to the left and managed to lean, half-sitting, on a window sill, the other to the right where he flopped to sit on the kerb.

Take 2: Just walking down Parnell Place having collected a Take Out (a very good one) from L’Atitude 51. I spotted three young men by a hatch at the Poor Relation. They were ordering food and drink to take away. Then I spied a few cans of beer on the counter so I joined the queue and got myself some Changeling and Dreamcatcher - I had been on the lookout for those ales.

Take 1 was at about 2.00 in the morning, more than fifty years ago. Was that late-opening corner shop called Keane’s? Take 2 was at about 6.00pm last Friday evening . The Poor Relation is owned by Cork Heritage Pubs who also have the Rising Sons Brewery under their considerable wing.

There, you may get delicious sandwiches made to order, coffee & cakes and more (including cans and growlers of their own Rising Sons beer) from 7.30am – 7.00pm Tuesday – Saturday & 12noon – 7.00pm on Sunday at the Poor Relation, pre-order here.

The brewery, in the Coal Quay, the heart of Cork City, has been mentioned in Lonely Planet: “This huge, warehouse-like, red-brick building houses an award-winning microbrewery. The industrial decor of exposed brick, riveted iron and gleaming copper brewing vessels recalls American West Coast brewpubs. It turns out 50 kegs a week, some of them full of its lip-smacking trademark stout, Mi Daza, and has a food menu that ranges from pizza to weekend brunch.”

The building once housed the famous Guy and Company printers, who at one time printed all the cheque books in Ireland. “We shall soon be brewing a pils in memory of those who worked on this site; without any sense of irony it shall be called Bouncing Czech.” Haven’t seen that beer around though! They’ve some good names, a few with local connections such as Mi Daza and Sunbeam.

They say: All our beers are brewed in-house and are chemical and additive free. We brew small batches with the best of locally sourced ingredients (where available). And because they are brewed on-site, ( less than 10 feet away) and mostly consumed, within a square mile of the brewery, we can guarantee quality, consistency and only the freshest of beer. We bring creativity, passion and a dash of rock n roll, leading to extraordinary flavours in our sessionable beers.

The Changeling was voted best pale ale in the world up to 5% at the International beer challenge in 2018. The seasonal special Dreamcatcher won a world’s best at the World Beer Awards in 2019. Quite a vote of confidence for the crew in Rising Sons.

They say: Voted best ale in the world up to 5% in 2018 at The International Beer Challenge. Hopped with Cascade and Mandarina Bavaria. Notes of orange, grapefruit and honey.

Rising Sons Dreamcatcher IPA 5.0%, 440ml can The Hatch at The Poor Relation

This Dreamcatcher IPA was voted World’s Best Golden Ale at The World Beer Awards in August 2019.

Colour is a deep golden amber. Fruity on the nose, apricot with some sweetness there too. Lovely harmony on the palate, hoppy enough but nothing extreme, could well be a gateway beer for those moving from mainstream as well as a satisfying drop for the more craft experienced. The latter will also be happy with the finish.

Both Changeling and the Dreamcatcher IPA are the first of their beers to be canned and that has happened within the last few months. Oddly enough, there are no details of the excellent Dreamcatcher on their website.