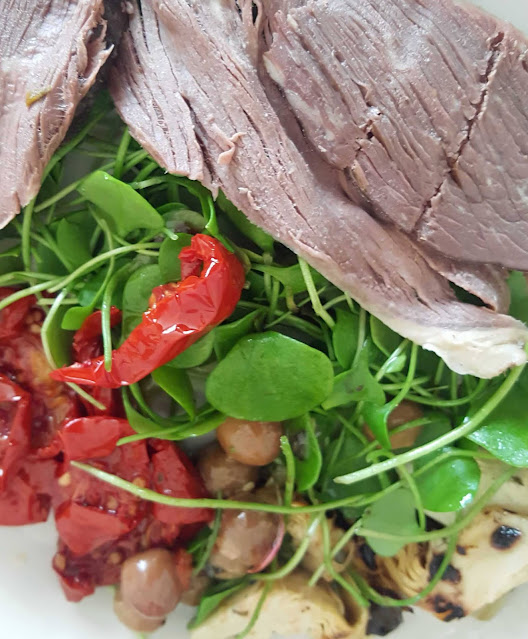 Ummera, winner of the Golden Fork Award for their smoked Irish organic salmon in the 2020 Great Taste, have another winner in their Smoked Organic Irish Picanha Beef. I recently ordered a box of produce from the Timoleague producer and the Picanha, with its out of this world flavour, is now our Taste of the Week.

Owner/operator Anthony Cresswell: "The Rump Cap is a highly regarded cut of beef in Brazil where it is called Picanha and Ummera have adopted the name, despite people saying it should be Irish, to which we reply and what about Entrecote Steak? It also adds uniqueness; I mean have you ever heard of Irish Picanha? Probably not!"

Anthony recommends serving it with a fresh salad and a light dressing and that's just what we did with the Aberdeen Angus beef. The salad came via Neighbourfood, a bag of superb mixed leaves from Horizon Farms, delicious, semi sundried tomatoes from Sicily in a mixed oil, equally delicious quartered artichoke globes in a mixed oil also from Sicily along with, from the Pyrenees, freshly dressed Arbequina olives (tiny but with a huge flavour). Quite a plateful!

The Picanha is available in whole pieces with weights varying from 500gm to 1 kg to 1.5kgs and should be sliced thinly. Very Highly Recommended!

It's not the first time, I've had this as Taste of the Week. During the Ballymaloe LitFest, I got the very first bite of it at Anthony's stall in the Big Shed. That was in 2016, the same year that it was voted the Best New Organic Product at the Irish National Organic Awards

For all enquiries please email info@ummera.com