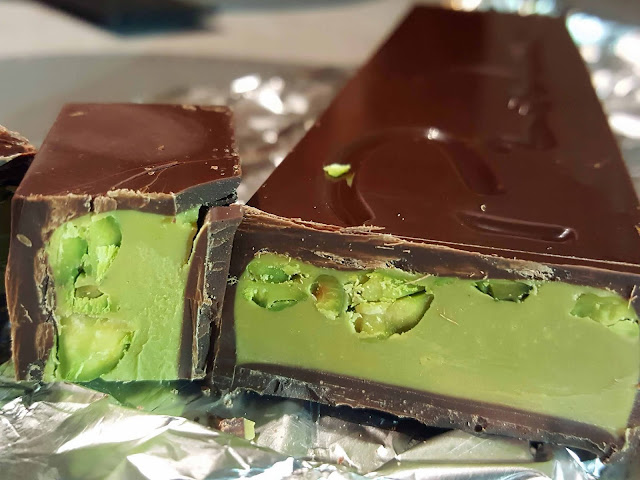 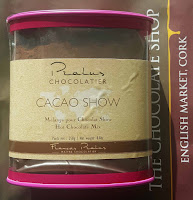 Just before Christmas I bought a small bag of goodies, including a lovely bar of the local Wilkie's chocolate, from the Chocolate Shop in the English Market. It was Click and Collect and as I was browsing their list online I spotted this creation by François Pralus. A bit expensive, I thought to myself.  Than again I said, go for it, this is Christmas. Minutes later, I sent off the order. And, hardly an hour later, got a message saying it was ready. Called in the following morning and picked it up. Great service.
I took my time getting to the big one, enjoying the other bars and also some lovely hot chocolate, the powder mix, called Cacao Show, also produced by M. Pralus. Then it was time to try the most expensive bar of chocolate that I had even bought. When I looked closely at it I saw that it weights some 160g, more than double most of the other bars available and so the €14.95 didn't seem that extravagant after all. Funny how you can justify these things! 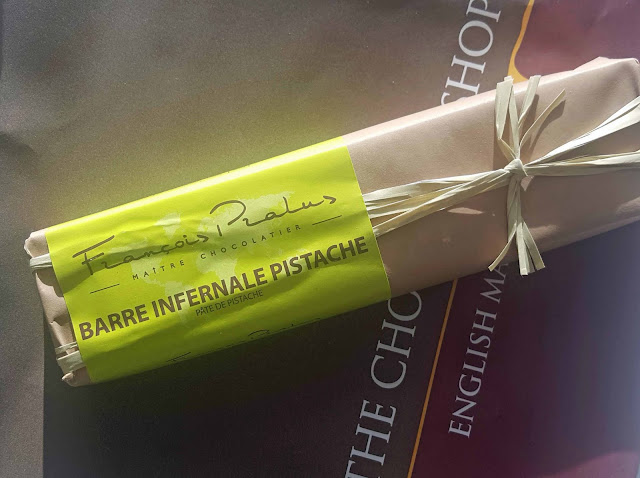 It is a large slab of deliciousness, no squares delineated, just the Pralus name embossed. As I cut it with a sharp knife, a little crumb of chocolate fell to the table. Picked it up and put it you know where and instantly realised that I was on to a winner, courtesy of Madagascar and the marvellous French chocolatier. And more deliciousness enclosed in the dark outside, a delightful paté of pistachio nuts.
Everything they say above is true! Do try it. I'll be ordering again. Pralus also produce other similar bars, including one nougat. Indeed, they have some 15 products list in the Chocolate Shop, including my hot chocolate mix.
Festival Food & Drink Favourites #3 Bodegas Robles Vermouth VRMT
Festival Food & Drink Favourites #2 8-Degrees "Devil’s Ladder: Belgian Tripel
Festival Food & Drink Favourites #1FabFestive Feast from Glass Curtain