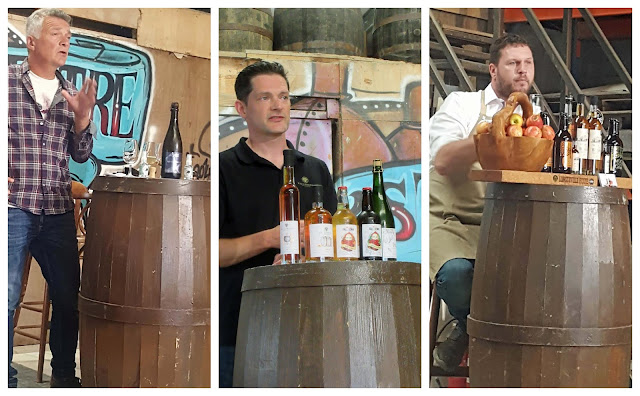 The humble apple was the star of the show as live events returned to the Drinks Theatre in the famous Big Shed at Ballymaloe. On Saturday evening, Barry Walsh (Killahora Orchards), Pascal Rossignol (of Le Caveau, representing Eric Bordelet of Normandy) and Rubert Atkinson (Longueville Beverages), came laden with good things and proudly and passionately spoke on how the drinks were produced.

“Seamus McGrath had been talking about events post lockdown, and we came up with this mad idea,” said Colm McCan as he introduced our trio. Colm promised the series would continue every Saturday through August and the next event features all drinks sparkling.

Expect a surprise or two. The organisers themselves were “ambushed” on Saturday last when the session had to be extended a little as both Barry and Rubert produced surprises, neither has seen a shop shelf yet and each is delicious.

Rubert came with his ABC: apple, brandy and cream. That cream comes from Ballymaloe’s Jersey cows. ”Enjoy like a Baileys. It is lovely and light and weighs in at 17% abv.” Barry spoke about their exciting champagne style cider, no name yet but due for release later in the year. ‘Based on 40% wild apples, it is quite a robust and interesting drink with the acidity coming from the hedgerow apples. It is clear and naturally carbonated and has been rested on its lees, is fermented in bottle and, like champagne, has been disgorged.” Another beauty to look forward to from Killahora.

All three producers frown on ice with their quality ciders, all backing Barry on that as he introduced his Johnny Fall Down Early Apple Cider, a slightly lighter version than the Late Apple. He said you could think of the two as a white wine and a red wine.

The Early Apple (picked earlier) is “100% juice — wild ferment — a year or more maturation —very dry — tannin a strong feature — bitter sharp, bitter sweet — pairs well with food especially seafood and bbq.” The Late Apple, both were vintage 2017 by the way, is driven by 30% Dabinett and lots of French varieties, some inedible as a fruit. And again this is designed “for food”.

Rubert also had ciders on his stand. The regular, Longueville House Cider, has an abv of 5.9%. “No chemicals and no pesticides” and he told how the estate benefits from the River Blackwater flowing through. They grow two varieties of apple here, the Dabinett and the Michelin. The sugar is natural and they use no extra sulphites. Longueville’s Mór gets is higher abv (8,00%) from fermenting in their apple brandy casks. “It is the same juice as the regular cider but is more robust, has more character, more flavour, well rounded, well balanced, really lovely.” I can agree with all of that!

When Eric Bordelet was starting off, some 30 years ago, he was advised to make “poiré as winemakers make wine”. Pascal has known Eric, a biodynamic grower, for decades and says while he has the 30 years behind him, he is still learning, even now with the challenges of climate change. “Back in 1992, he noted a gap at the top of the market but also realised he needed granitic soil”.

With all that sorted - I didn’t quite get the details here as a thunderstorm rattled the old shed - Eric has become one of the most renowned cider and perry makers in the Normandy region. We had his Sidre Brut, a classic dry cider, tender or mellow in the mouth, yet also lively with plenty of acidity and extremely refreshing in front of us now. “It is made from 20 varieties and fermentation goes on for much longer than his other products, bottling in May or June, the exact time decided by tasting.”  Eric’s training as a sommelier helps him pick the correct moment.

And that experience and training also come into play with his Poiré Authentique. This juice spends just  2 to 3 months in barrel as Eric seeks “the main balance he wants” between sugar, acidity and tannin. “It is all about subtlety.” And we could appreciate that as we sipped this refreshing perry. It is made from about 15 varieties of pears. By the way, Pascal confirmed that some of Eric’s pear trees are over 300 years old!

When it comes to pears, Killahora has no less than 40 varieties on their south-facing slopes in Glounthaune. They have a lovely 2017 Poiré (Perry) as well. Barry: "A slight floral nose - a Pet’ Nat style - not too many bubbles - lemonade, gooseberry, slight smokiness - - we use only wild fermentation - no temperature control, only the small barn - everything is vintage based.”

At half-time, our trio didn’t produce the oranges but we did have some refreshing fruit ciders. Three big colourful jugs appears and ice was now allowed! One had elderflower mixed in, another had ginger, while the third was made up with strawberry. All absolutely delicious and refreshing and Rubert encouraged us all to make them ourselves. “Use a good base cider like the ones in front of us and experiment to find what your favourite taste is. You don’t have to rush off to the supermarket to buy this type of drink. Support local and see how versatile cider really is.” 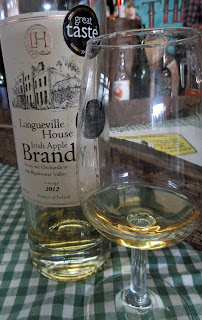 The ABV went up a bit as we approached the final round, beginning with Killahora’s Pom’O. Barry: “The last pick of the apples, bitter-sweet with apple brandy and hedgerow added. It is aged in fairly neutral Irish whisky barrels and this 2018 has a great balance between the freshness of the apple and the alcohol. It’s perfect with dessert, particularly with blue cheese, and, not too sweet, not too strong, is also perfect for cocktails.”

Then he produced their Apple Ice Wine. “We’re very happy with its reception. This is 11% abv, depends on the vintage. We freeze the juice, then slowly thaw it to increase the concentration of flavour and tannin and so. Sweet yes but the must have acidity is there. Great with goats cheese, with cheese in general. It is 100% natural, just juice.” An amazing drink and no wonder it is getting so much attention.

Longueville House Apple Brandy is well-known at this stage and has picked up many an award. “Very smooth, no burning, and with a lovely aftertaste,” said Rubert. “It is a quality spirit and as such does not need a mixer or ice. Enjoy!”

We did enjoy that final sample as we had enjoyed the event from the first flight (Perry) to the smooth farewell from the brandy. A superb opening to the series which continues here next Saturday with all kinds of bubbles on show.
Ballymaloe Cider Drinks Theatre Killahora Le Caveau Longueville House perry The Big Shed