How about Chimay and Scallops? . Red and Pale Ales too. 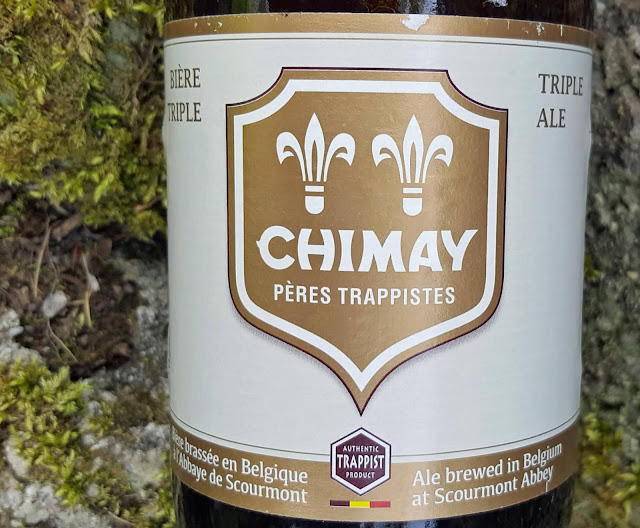 It’s a hazy golden beer from Belgium, one of the famous Trappist beers, a white head, like that of the elderly friar in the brewhouse, and that soft white crown is long lasting. Only 13 beers in the world, including 6 in Belgium, can carry this label of Authentic Trappist Beer.

This is a Tripel, with a high abv, but there’s no big heat here, just a marvellous balance, the combination of fresh hops and yeast, and the fruit of course. An amazing balance yes, but also a concentration of flavour that takes it to an orbit outside of the usual and into space,  a rather special beer space.

All’s in harmony, like a choir of monks. I like this sentence from their website: “Beer can of course be served with its yeast. It is quite edible if you wish. Otherwise leave the last centimetre in the bottom of the bottle.” I’d be the last to leave even a millimetre of this liquid gold.

They say: “Chimay is an authentic Trappist beer: Our recipe has remained unchanged since its creation (1966) by Father Théodore and we want to be transparent about the ingredients that make up our beers. We clearly indicate them on our labels: Water, barley malt, sugar, wheat starch, hops, yeast and bitter orange peel.
All the sparkle of our beers comes from the transformation of sugar by our yeast, as has always been done traditionally. The refermentation in the bottle is a guarantee of quality.”
As always with Belgium beers, food pairings are suggested. Top of the list here is CARPACCIO OF APPLES, SCALLOPS AND GRAND CHIMAY  (note: not fish ’n chips). Check out the video: https://www.youtube.com/watch?v=8bD78zzJoE0&feature=youtu.be
Cotton Ball Velvet Red Ale, 5%, 500ml bottle

A very dark red indeed with a coffee coloured head (which departs pretty quickly leaving just a lacy hint or two remaining on the top). Aromas are moderately intense, floral and fruity (citrus). Pretty much in the classic mode (though it is gluten free) but there’s a refreshing tangy hint and a touch of clean pine in there as well as citrus and more exotic fruit like mango.

A well-made beer, nicely balanced between the various hops, the bitter and flavour, nothing extreme. Makes a pleasant smooth drink on its own and I expect it makes a good companion at the table. Might go down well with one of those tasty Wild Boar burgers from Ballinwillin Farm or perhaps a pizza in the Cotton Ball when it reopens.

Hops used are Herkules and First Gold with a dry hopping of the versatile Mosaic. They have (or at least did have) a nitro draught version in the bar. They brew quite a range of beers and the core ones are all on draught in the bar and indeed in lots of other bars. And there’s a handy growler service as well.

They say: “We are brewing our beers in the true spirit of our Great Grandfather Humphrey J Lynch, an American civil war veteran and cotton mill foreman. Three wives later, Humphrey returned to his native Cork in 1874, to set up his very own public called the Cotton Ball. The pub and the family are still here today and three generations later we are finally brewing our very own selection of craft beers in his honour.”  The brewery was founded in 2013. 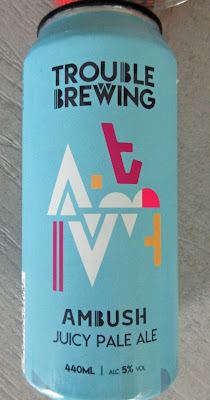 This is a hazy beer (little evidence of carbonation) with a light straw colour, and a soft white head that slowly sinks. Exotic fruits aromas, mango and pineapple in the mix. And then much the same fruits combining delightfully on the palate, this juicy pale ale makes you stop and take notice.

You’ve been ambushed. So, sit back and relax with each silky juicy mouthful (make that each sip - you’ll want to let the magic linger), as you’ve got one of the best of class in your hand.

Malts used are Irish Pale, Oats (credited with imparting the smoothness), Carapils and Crystal while hops are Mosaic, El Dorado and Citra.

They say: Trouble Brewing is a craft brewery based in Kill, Co. Kildare. Set up in 2009 by three close friends Paul, Thomas and Stephen. Trouble Brewing is one of a small number of Irish breweries producing quality craft beer in order to offer people an alternative to the large multinationals, that spend more money on advertising than on ingredients, and specialise in bland.

Made in Monaghan, this pale ale comes in a light amber robe, with a big white head that lasts a fair bit. Aromas are modest, slightly citrusy. Great depth of flavour on the palate though, exotic fruits, mango and passionfruit in the mix, and that flavour takes you right through to the finalé, after which you could be thinking of a second one. May be light in bitterness and alcohol, as they say, but no shortage of personality. Another well made, well balanced beer from Brehon.

They say: Seisiún from the Irish for a rousing songs, great drinks, good company and craic. .. delighted to bring you a light session ale with citrus flavours of passion fruit and mango. Light in bitterness and alcoholic content. A truly sessional beer.

* Bought the Red Ale from the Cotton Ball itself; the other three bought in Bradley's of Cork.
Brehon Brewhouse Chimay Cotton Ball good beer Trouble Brewing