To Øl City - A Brewer's Paradise

To Øl started life in 2005 when founders Tore Gynther and Tobias Emil Jensen “pirated” their high school kitchen facilities during closing hours and began turning it into a brewing lab.

It wasn’t until 2010 when they released their first commercial beer. They quickly gained attention and were named in the Top 100 breweries in the world in 2012 and in 2014 To Øl was awarded the world’s 9th best brewery. For a decade they operated as gypsy brewers, brewing their beers in other breweries with spare capacity, but they have now set up their own brewery in Zealand, Denmark, called To Øl City.

Like to take the brewery tour? Just click here. And, if you're a brewer, you may well get a chance to use the facilities. After all, Tore and Tobias were gypsy brewers themselves.

Pronunciation "rough" guide for To Øl: An bhfuil tú ullamh?

Showers of bubbles race up through the pale gold (slight haze) of this pilsner. And what a pilsner. Superbly fresh and clean as promised, well-flavoured too and absolutely refreshing. The slower the fermentation, the better a pilsner tastes, they say, and the proof is on any palate lucky enough to be washed in this beauty. Not sure I’ve tasted anything better in this style. Crisp, complex and golden - do watch out for it!

Lager is always the slow-coach in the brewery but this one, the fourth product in their new Core Range, is an authentic German Pilsner, lagered for 45 days at -1 degree Celsius. It is also organic and the malts used are Organic Chit, Organic Golden Light and Organic Pilsner.

This Danish Indian Pale Ale is a “New England style thirst quencher for the hop-heads” in disguise. It has a pale gold colour and is cloudy; white head vanishes quickly. Aromas are mild, slight citrus and floral notes in there. On the palate it is crisp, with juicy exotic fruit, before a quite dry and refreshing finish. Named after the new brewhouse To Øl City (Tool city, I think!), this is certainly easy-drinking and one (or two) for a session, in the city or elsewhere.

They say: “In the land of Denmark and small town of Svinninge, To Øl City is our new home. The vision is to brew the best beers in the world, and build a craft beverage hub of diverse and talented producers….the industrial rhythm of progress pulsating beneath our feet - as all the creative minds get together over the kettle once again to brew up something special.”

The hops are Mosaic while the hops line-up is Carahell, Flaked Oats, Golden Promise, Pilsner and Wheat.  A terrific combination and well worth looking out for. 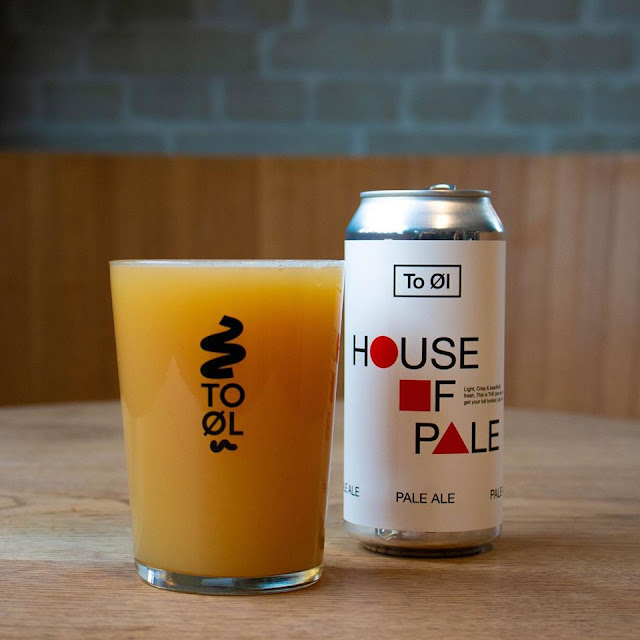 A step up in alcohol for the Pale Ale but the colour and the head is much the same as the Session. A little more hop in the aromas. More flavour and less crisp but as they say themselves come here to “get your full-bodied juicy fix”.  That smoothness shows a lot of malt but the hops is not shy either and that juicy stuff is a treat. Put this on your short list for sure.

They say: House Of Pale is one of the recipes we’ve taken from our beloved mad laboratory (brewpub!) in Copenhagen, BRUS. It’s seen many changes and tweaks over this year, experimenting with hop doses and overall ‘crispiness’ - and now we’re pretty sure we’ve got exactly what we’ve been looking for.

Hops in the ale are Mosaic and Simcoe while the long line of malts consist of Chit Malt, Flaked Oats, Golden Naked Oats, Melanoidin, and Pilsner.

To Øl are going for world domination with this IPA, the first to be brewed in their shiny new brewhouse. Colour is a lemon/yellow, with a thin white head that has more staying power than you’d expect. Aromas are hoppy and citrusy and there’s more of the same on the smooth palate.

The word “extreme” is used as regards the amount of hops used in it yet the hops, while certainly evident, are moderately intense. Just to be clear, the hops come through, no mistaking the Simcoe, with its exotic citric fruitiness. Overall the IPA is quite exquisite, a very enjoyable drink indeed, right the way through to a lip-smacking finish.

So much so that you can see how To Øl hope to make this one of their core beers. “We pushed the hops to the limit, packing in as much aroma as possible to this fresh beauty. Thus begins a new era of our hoppy world domination - drink it, and embrace the future.” The hops, by the way, are added not early on but at the “whirlpool” phase, hence the name.