Goldie. Where The Fish Reigns

It’s new and cool. Check out those white tiles with black designs opposite the counter. Ease yourself into those comfortable low-backed chairs and, if someone to the side talks to you, just swing round a few degrees and go face to face. But most of all, Goldie is all about the fish.

The clue of course is in the name. Most natives and many visitors will know that the big fish that forever swims at the top of the tower in Shandon has forever been nick-named Goldie. And the city loves its fish both in sentiment and in tasty reality. And Goldies makes that reality even more flavoursome.

The restaurant takes the ‘whole catch’ from the Ballycotton small day boats (so they take whatever is caught on the day, regardless of the quantity and species) ensuring a daily changing menu featuring the freshest produce available. They also buy in the English Market.

Goldie operates a ‘gill to tail approach’, using as much of the fish as possible. So you’ll see some surprises on the menu, not just the species on offer but also the parts. Anyone for crunchy fish spines?

We were prepared to be surprised when we visited the other day. Front of house is very friendly and on the ball here. There’s an immediate welcome, help with the menu if need be and a chat or two over the evening. We were in early and it filled up quickly enough. Another upstairs room is being readied even as the confident new restaurant takes its first accomplished steps.

The window, more or less facing the “parent” Market Lane, shows the words Fish and Ale under the main title. And the beers come from the Elbow Lane Micro Brewery, also across the street. Brewers Russell and Davide have specially formulated the ales to suit food and, as customers of Market Lane and Elbow Lane itself will tell you, they have been very successful in that regard.

I enjoyed a pint of the Jawbone Pale Ale with my fish. It is on draught as are the others: Angel Stout, Elbow Lager and Wisdom Ale, all named after Cork lanes.

The menu is divided into four sections. Inexpensive options come under Snacks. Next step is Small Plates, followed by Mains, and Desserts (no fish but they do use sea salt!). A quartet of sides available also including Sea Salt Shoestring Chips, Crushed baby potatoes (with scallion and seaweed), Roast Cauliflower (with hazelnut brown butter), and Sea Vegetable kimchi salad (with squid).

There were five snacks on the Friday we called and we enjoyed the Golden Crumpet and seaweed butter and enjoyed, even more, the Prawn cocktail crisps with cultured cream and seaweed, each priced at €2.50.

Harty’s Oyster feature on the small plates but our choices were the Salt Fish brandade, seaweed cracker and pickled celery, a very tasty combination indeed (7.5). The similarly priced Seared devilled sardines with pickled celeriac were superb, so good I thought briefly (it was raining outside) I was back in the old town of Albufeira enjoying a plateful in the hot sun with a glass of wine. By the way, they have a wine list with most of the whites very well suited to the fish.

The superb mains were yet to come. I’m a sucker for Gurnard but rarely come across it when eating out. The Pan fried Gurnard here (21.50), with bok choi and lasooni butter, is a delight. Simply delicious, especially with the sauce.

And the chicken butter sauce with the Pan Fried Lemon Sole (22.50) was also a winner. There was a decent chunk of swede (how often do you come across that veg in restaurants?) on the plate as well. We could have had sides but resisted the temptation as we were determined to go through all three courses.

As it turned out, the strategy worked very well indeed. We completed the three and felt good for the fourth! Just a short list of sweets but two were enough for us. The Pom ‘O apple port Panna Cotta with caramelised apple and crumble and the Achill Island Sea Salt and caramel pudding with hazelnut biscotti were each that bit different to the usual dessert and a lovely finalé to a superb fish dinner.

Goldie is the result of an exciting collaboration between Aishling Moore (25), former head chef of Elbow Lane, and Stephen Kehoe, (39) executive chef of the Market Lane Group. 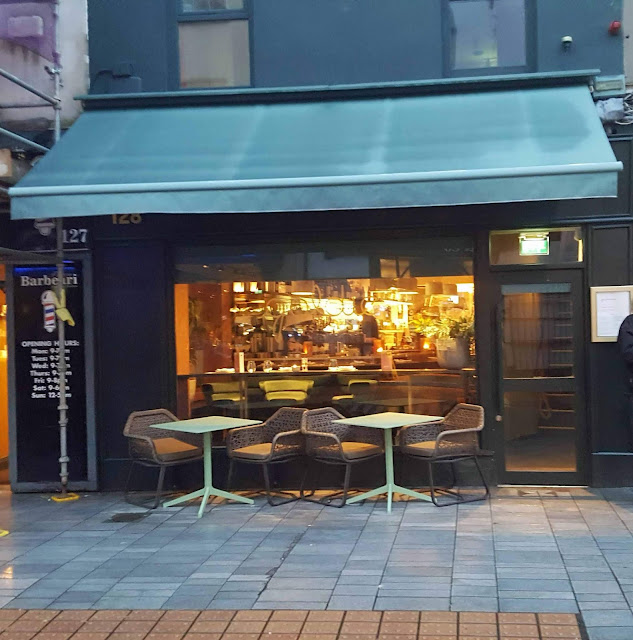