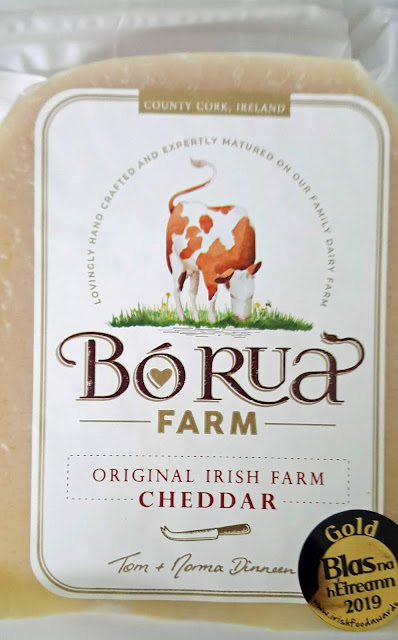 The multi-award winning Original Irish Farm Cheddar from the Bó Rua farm in East Cork is our Taste of the Week. Tom and Norma Dinneen are the couple behind this delicious product which this year won the coveted Gold at the Blas Irish Food Awards in Dingle. It is our current Cheese of the Week and, aside from the superb flavour, what I love about it is its extra creaminess.

That is probably down to their Montbéliarde (the red cattle after which the farm is named) and Friesians who all graze outside for most of the year. Indeed, I see on Facebook that they about to go in for the winter around now. Montbéliarde by the way produce the milk from which the famous Comté is produced.

I’ve met Tom a few times over recent years and had a chat with him at the Cork Kerry Food Fair in the City Hall where I bought my wedge of the cheddar. A week or so later, the Dinneens added to their honours list when, at the Irish Cheese Awards 2019 in the Metropole, they were awarded silver in Class 19, best New Cheesemaker since 2016.

So well done to Tom and cheesemaker Norma (loving the new dairy). Look out for the cheese - it is fairly widely available.