A huge selection of Ireland’s farmhouse cheesemakers and producers gathered this evening (Thursday 7th November) at Cork’s Metropole Hotel, eager to learn who had struck gold – and silver and bronze – during the 2019 CÁIS Irish Cheese Awards. The list of worthy winners incorporated the finest cheesemakers currently operating in Ireland with 30 industry movers and shakers from all across the country walking away with a coveted award.

Hosted by MC and presenter of RTÉ’s Ear to the Ground Helen Carroll, the prestigious biennial event featured speeches from key CÁIS figures including Chairman Louis Grubb, Chairman of Bord Bia Dan MacSweeney and members of the trade, as well as one of the expert judges John McKenna. Guests were treated to a sumptuous 5-course meal prepared by the Metropole’s Head Chef Stuart Dardis during which 22 award winners – including the Public Vote Award, CÁIS Appreciation Award, Supreme Champion and gold medal winners – were announced. Thursday’s ceremony saw members of CÁIS; key supporters such as Bord Bia, Pallas Foods, Ornua, Horgan’s and Traditional Cheese; judges; cheesemakers; members of the public and trade representatives congregate in celebration of the abundant, diverse and exquisite range of Irish farmhouse cheeses produced on home soil.

The Munster region saw an abundance of gold medal winners, while silver and bronze medalists covered ground from Co. Wicklow to the Aran Islands, with many stops in between. Some of Ireland’s most well-known cheesemakers, such as Coolea Farmhouse Cheese, Durrus Cheese, Bandon Vale and Ardsallagh Farmhouse Cheese were awarded across multiple categories, as were the Tipperary-based Cashel Farmhouse Cheesemakers, Waterford-based Knockanore, Galway-based Killeen and Dozio’s of Mayo from the West of Ireland.

Guests at the gala event were particularly eager to hear the results of three of the biggest awards of the night. The first of these to be revealed was the winner of the Public Vote; a category that was introduced for the first time in 2019 and received more than 1,000 votes from members of the public. Macroom-based producer Coolea Farmhouse Cheese was announced as the clear winner, with the Willelm family delighted to accept the award. The CÁIS Appreciation Award was next to be announced and was presented to 2019 judge Dr Kieran Jordan by Chairman of CÁIS Louis Grubb. The final and most anticipated award-winner of the night – Supreme Champion – was announced as Marion Roeleveld for her 5-month matured Killeen Goats Cheese for the Simply Better at Dunnes Stores range, who received rapturous applause from attendees as they made their way to the stage.

Since the previous awards ceremony, which took place in 2017, a range of new cheeses and cheesemakers were also introduced and commended on the night. The winners of the ‘New Cheese (available in last 2 years)’ category hailed from all corners of the country, with Dozio’s of Mayo’s Barr Rua Alpine Style cheese (gold medalist), Knockanore Farmhouse Cheese’s Allenwood Smoked (silver medalist) and Kilnalahan produced by Galway’s Kylemore Farmhouse Cheese (bronze medalist) all scooping awards. Cheesemakers new to the market since 2016 were also rightly showcased and welcomed into the fold, with the brains behind Bó Rua Farm Original Farmhouse Cheddar (Bó Rua Farm) and Sheep's Milk Halloumi (Ballyhubbock Farm) winning silver and bronze medals respectively, while Michael Finegan of Boyne Valley Bán (Boyne Valley Farmhouse Cheeses) walked away with gold. 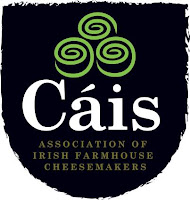 Commenting ahead of the awards ceremony, Padraig O’Farrell of CÁIS said: “The Irish Cheese Awards provide those involved in the industry with a wonderful platform to showcase their work and to transform their brands into household names within Ireland and beyond. The event itself also offers an opportunity for producers, both on a large and small scale, to network and build community links.”

Also speaking ahead of the event, Dan MacSweeney, Bord Bia’s Chairman, said: “While these awards recognise individual excellence, all 68 farmhouse cheesemakers can take an equal share of the credit for the outstanding contribution that the sector, valued at €12 million, has made to the Irish dairy industry, our culinary culture and to local communities.”