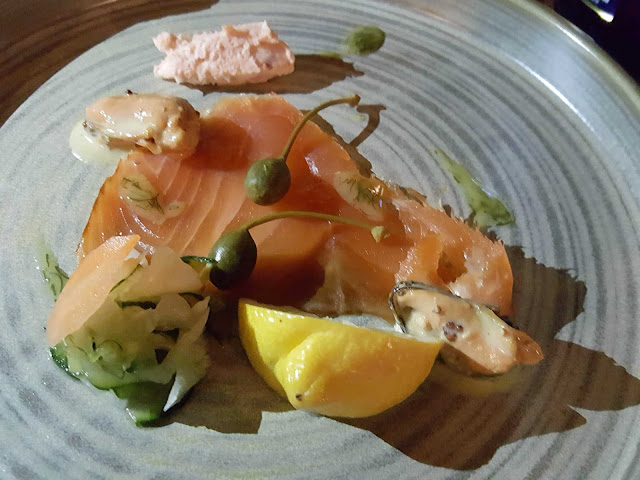 Even before the day softly and slowly turns to night, the Farmgate has much going for it, including an amazing wide-ranging larder from the market underneath, and the expertise of the kitchen. Then, when darkness shuffles into the corners of the city, the magic of the upstairs venue is enhanced, especially on the run-up to Christmas. Add in next the conviviality of the communal table and you have a winning hand of four aces. 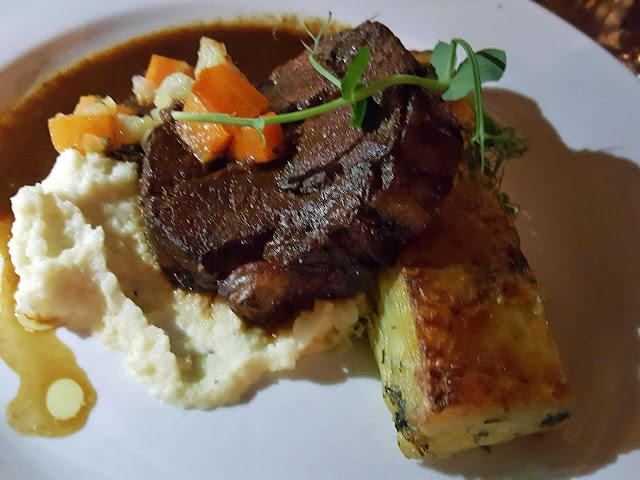 It’s a relaxed start; a glass or two of bubbles and an amuse bouche or two on the balcony. Soon we are being led into the famous restaurant, this year celebrating its 25th anniversary. And indeed, this series of suppers is part celebration of the 25th. There are still three nights more to come, all with the winning formula. Take your pick from 29/11; 6/12; or 13/12. Just letting you know before the lady from the other evening and her friends book them all up!

We nibble on soda bread and butter as the staff fill all the drinks orders, everything from excellent European wines, Irish beers to their own Elderflower Cordial. The initial small plate of Organic Beetroot, Ardsallagh Goats Cheese, Hazelnuts, a classic combination of local ingredients, gets this part evening underway as people introduce themselves across the table. 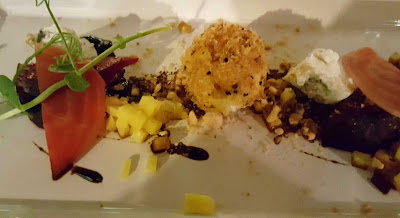 Frank Hederman, whose fish stall is downstairs, was among the company and so it was entirely appropriate that his smoked salmon (mussels too) was on the next plate. In 2000, the New York Times said of Frank (as well as labelling him “droll”): “Mr. Hederman smokes fish, which is a little like saying Steinway makes pianos.” Not much one can add to that except perhaps to say that Frank (like his now veteran smokehouse which is increasingly more than a passive player in the process), has improved in the 21st century. By the way, another refreshing taste of the sea, in the form of a dressed oyster, came with the fish plate. 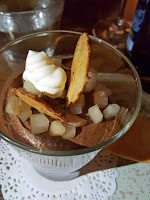 Back to Terra Firma and the next treat, from Chef Pam Kelly and her team in the kitchen, was Featherblade of Beef (from butcher Eoin O’Mahony downstairs) with Artichoke and Potato Dauphinoise. Featherblade has been a favourite around Cork over the last decade or so and this rendition, perfect in both quality and quantity, won’t have harmed its reputation in any way whatsoever. 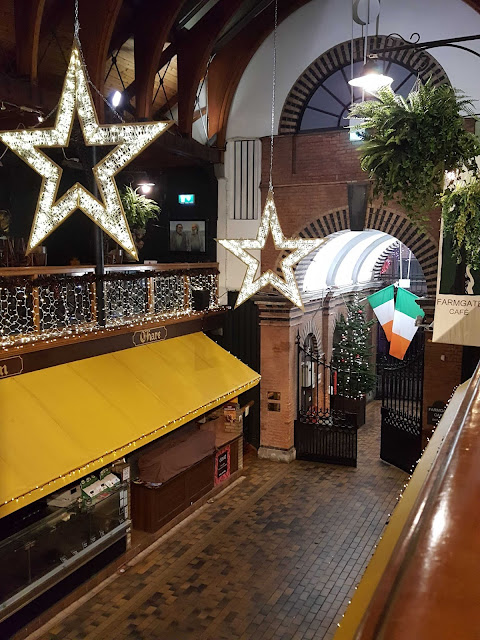 Someone asked the following day if we had had music. We didn’t but the music of the animated conversations around the table was all that was needed. The next course was chocolate, a luscious Dark Chocolate Marquise, Brandy and Shortbread Biscuit. Actually that dessert did stop the conversation flow for a short spell. The finalé, a rather splendid (and local of course) one, soon followed: Milleens Cheese with fig compote.

Soon we were leaving in happy dribs and drabs. It’s cold outside, someone warned, but we were pretty well warmed at this point, happy too or happy out as we are inclined to say in these parts. In fact, we felt as if we were i gcorplár an tsamhraidh, the name of Cormac Mehegan’s 2012 painting reproduced on the cover of the menu card.

Inside the card, the producers and suppliers were acknowledged and here they are: Glenilen Farm, Kilbrack Farm, Ardsallagh Cheese, On the Pig’s Back, Hederman’s, O’Connell’s Fish, O’Mahony’s Butchers, Longueville House Apple Brandy, and Roughty Foodie.