Pizza galore as Pompeii Pizza celebrated their tenth anniversary at Franciscan Well, their Cork base for the decade, last Monday night. I always enjoy their pizzas here. And don't worry, your palate won't get bored as Pompeii keep coming up with new toppings, even a Breakfast Pizza featuring Jack McCarthy's black pudding and a fried egg on top.
Of course beer and pizza are traditional table companions and we were glad to again try the Franciscan brews including an old pal Rebel Red and a newish one, a session ale (4%) named Pilgrims.

The party was called to start at 7.00pm but, when we came in at 6.30, the place was abuzz. We checked out the menu for the night. You could make your own but we gave that a skip. CL ordered the Salsiccia: tomato sauce, broccoli marinated with olive oil, garlic and chilli, O’Flynn’s sweet Italian sausage at the heart of it, Fior di Latte Mozzarella. A superb combination - we shared - even the broccoli was outstanding.

My pick was the ‘Nduja. It features spicy pork sausage with lots of chilli, together with caramelised onions, fior di latte, parmesan, & fresh basil. A bit more spice than the Salsiccia but another very satisfying pizza indeed. Well worth a try if you get a chance to visit. Just as well we ordered the regular size - don't think we’d have managed the large.
Johnny O’Mahony established Pompeii Pizza in his hometown of Fermoy in 2009. With the help of a group of friends, he hand-built his first wood-fired oven based on the design of the ovens discovered in the ancient ruins of Roman Pompeii – hence the name ‘Pompeii Pizza’. His innovation was to put the wood-burning oven on a trailer, so Pompeii Pizza was born as a mobile venture.

In the early days, Johnny roped in family and friends to assist, and served slices of wood-fired goodness at numerous farmers markets, food fairs, and festivals throughout Cork, and further afield. 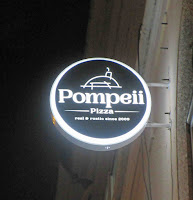 Within a couple of months of the inaugural market, Pompeii Pizza began collaborating with the Franciscan Well Brew Pub on Cork’s North Mall, to establish a pop-up pizzeria in the beer garden on Thursday nights.
Due to popularity of this experiment, it evolved into a full-time residency and Pompeii Pizza installed a custom-built outdoor kitchen in the beer garden. The Pompeii Pizza-Franciscan Well partnership was at the vanguard of the beer-and-food-garden trend which has proliferated across the country in recent years.
Pompeii Pizza continues to stay ahead of the curve with an extensive, eclectic, and evolving menu. Every week, the pizzaiolos invent new vegan and meat specials, which typically feature seasonal ingredients and a selection of local Irish produce. Pompeii Pizza takes pride in working with top local producers, such as Toons Bridge Dairy, Gubbeen Smokehouse, The Real Olive Company, O’Flynn’s Gourmet Sausages, and O’Mahony’s Family Butchers.
The original dough recipe came from Johnny’s Italian brother-in-law, Luigi. Over the years, Johnny and the Pompeii team have refined the recipe to achieve the optimal base – thin and light, but structured enough to be eaten in the traditional way, by hand.
Recently, they even started milling some of their own flour for the pizza dough on-site. Since installing a stone-ground mill in the pizzeria earlier this year, they have transitioned from exclusively using Italian type 00 flour, to combining it with their in-house flour (milled from Irish-grown wheat) to produce a unique blend.
Pompeii Pizza has expanded by adding a new seasonal location in recent years. For the last two summers, Pompeii Pizza has teamed up with the Sea Lodge Hotel, in Waterville, Co. Kerry, to bring an al fresco pop-up pizzeria to the seafront village. The Waterville outfit includes a custom-built catering trailer with in-built wood-fired oven, and a mobile café/gelateria crafted from a converted horsebox. They'll be back in Waterville next summer, from the June Bank Holiday.
While the Cork company has come a long way in 10 years, the ethos has always been, and remains, about keeping it real. Really enjoyable, as we confirmed the other night and not for the first time. Happy Anniversary to Johnny and all the team.

Thanks to Siobhan for all the info!