My Shortcut Through 228 Wines at O'Brien's Festival Cork


My Shortcut Through 228 Wines at O'Brien's Festival Cork

The amazing O’Brien’s Winter Wine Festival posed a problem or two, even for experienced tasters, at the Clayton Hotel  in Cork on Thursday evening. No problem at all with the wines, just the sheer scale of it: no less than 228 wines on show. My solution was generally to take the organic route and that worked out well enough.

And that gave me time enough to catch up with friends, such as John Wilson who was launching his Wilson On Wine 2020 and Jose Maria Frail owner of the small family-owned Tandem Winery in Spain’s Navarra.

Indeed I had planned to attend the Tandem masterclass in an adjoining room but it was booked out in no time. Still, there was the considerable consolation of attending the masterclass on the wines of Germany’s Lingenfelder Estate, given by Georg, a member of the 14th generation of the family that has been making wine here for some 500 years! We’ll return to that and to John Wilson’s book later this week.

A few years ago, we enjoyed a lovely lunch and wines at the Lynch-Bages owned restaurant, Café Lavinal, in the village of Bages, at the gates of the Chateau. JM Cazes are the owners of Lynch-Bages and also own high-quality sites in key wine regions. Our “starter” on Thursday was the Michel Lynch Organic Bordeaux Blanc, an attractive aromatic blend of Sauvignon Blanc (85%) and Semillon, dry and refreshing with a crisp palate, well priced at €15.95. It is organic and the label is made from recycled paper. 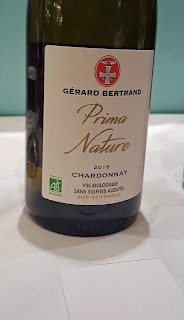 Gérard Bertrand has quite a reputation for his wines in the Languedoc region and it was his Prima Nature Chardonnay 2018 that the we tried next. This is organic, vegan, with no added sulphur and no oak either. It soft, elegant, refreshing with apple and pear flavours and also well-priced at €16.95.

Also well priced and also dry and refreshing is the Cortese Nostru Catarratto Lucido with its eye-catching label. It’s an organic white from Sicily made from the local Catarratto grape. It is a fresh and light wine with a ruby robe. Red berries and a hint of spice in the complex aromas. It is fresh and lively, again that spice and fruit, elegant with silky smooth tannins, harmony throughout right to a very satisfying finish.

The reserve Chin Blanc 2018, from Ken Forrester in the Stellenbosch (South Africa)  has spent some 9 months on lees. It is harmonious all the way through to a very satisfying finalé. M.A.N. Vinters, also from South Africa but from the Agter-Paarl, had the seriously impressive Bellow’s Rock Chenin Blanc, also 2018, aromatic and fruit. Hard to separate these two, especially since both are priced at 15.95 for November and December.

Looking for an organic vegan Merlot, juicy and lively, at a good price? Then go no further than the Prima Nature Merlot from Gérard Bertrand. Good fruit flavours, fresh acidity and a juicy finish. And no added sulphites by the way.

From the same table, the same stable, comes the Nero d’Avola 2018. Unoaked, aged on lees, pure and silky. It is organic, no added sulphurs and “drink it young” was the advice from the table.

Always have a soft spot for the Kangarilla Road in the McLaren Vale since the days of Wine Alliance. Now the Australian winery has a new generation on the road, Charlie O’Brien. He brought two reds with him. Our first was the Street Cred Shiraz, fruity and soft. Very quaffable indeed. The second, Terzetto 2013, had the edge though. It’s a blend of three Italian grapes, rich and robust, well balanced too. Something different and well worth a try.

By then, it was time to catch up with Jose Maria, just back having enjoyed meeting the punters at his masterclass. We were on his Ars in Vitro, a blend of Tempranillo and Merlot, that is as smooth as they come and, unoaked, it comes full of juicy fruit. Worth a try, especially as it’s down to 10.95 in the Nov/Dec sale.

Another smooth red, Ars Nova, features the Bordeaux varieties of Cabernet Sauvignon and Merlot and the local Tempranillo. It has been aged for 24 months, the last 9 in oak. If the previous one is art in glass, this is class in a glass and we gave it five out of five. Good price too at €17.45.

The French varieties, Cab Sauv and Merlot, also feature in the Mácula, a serious wine with intensity of aroma and flavour yet rounded with a long and satisfying finish.

Ars Memoria 2012 was our final wine from Tandem, a rich and robust red that has spent “14 months in new French oak”. This is a Cabernet Sauvignon, dark of colour and rich of flavour, a superb wine to be drunk with friends, even in their memory (it was made in honour of friends and members of the Tandem family who have passed on).