A Quart of Ale± #51. On the craft journey with lager

On the craft journey with lager from Western Herd, Augustiner, Porterhouse and Galway Hooker, a pretty decent crew!

My first close encounter with a Clareman wasn’t promising. It was during the 1963 Harty Cup final. I’d just come on as an early sub and the foxy fecker at full back said: “First ball that comes in, I’ll split you open.” The Ennis CBS guy didn’t know that his 16 year opponent had been learning the tricks in Junior B hurling around East Cork and we (St Finbarr’s), having beaten Flannan’s (a Clare-Tipp amalgam) in the semi-final, went to to win.

No looking back in anger. I love Clare, its people, its cliffs, its caves, its Burren, its food, and for the last two years or so, its beers, particularly those made by Western Herd.

Their website says this Loop Head Pilsner is crystal clear. It’s not. Not as dense as Loop Head on a foggy day, but certainly not clear. Plenty of bubbles rising through the murky light gold to a quickly thinning head. Yeast and malt on the slightly sour nose for sure. After that, the anticipated crisp clean Pilsner style comes through and we’ve got a central European lager, a pretty serious one, to enjoy from the west coast of Ireland.

And that was their plan all along, based on “a single malt and simple hop bill”. Hops were Saaz and Perle, the malt Pilsner, with a Lager yeast of course.

Pilsner is one of the main styles of European lager. But what exactly is it? Pilsner is a pale lager named after the Czech city of Pilsen from where it originated. This bright golden beer is typically crystal clear with a large amount of foam. Saaz hops are a must for this style offering a spiciness to the beer resulting in some earthy, floral, crisp flavours. A refreshing Pilsner is always a popular choice.

They say: The lager is named after the Loop Head lighthouse which has been guiding merchant ships along the west coast for a long time with vital shipments safely reaching the beer fans of Clare via this old maritime route.

These days, beer is shipped out of the county too. Like this crisp, dry Pilsner you’re holding. Enjoy its slightly fruity finish and think of the fresh crush of the Atlantic waves the Loop Head lighthouse watches over.

My last visit to Clare was disrupted by another foxy fellow,  called Trump and, having followed many and long detours, by the time I arrived at Loop Head, the fog had set in. I would have had been better employed had I decided to sample the beers of Western Herd in McHughs in Ennis or in Flanagan’s of Lahinch. Now, that’s a tip for you. I didn’t get to the bars, didn’t know about them then, but I did find the beers in a few restaurants and was impressed as I am with this pretty serious Pilsner. So if you’re toasting County Clare, put a Western Herd in your glass and enjoy. 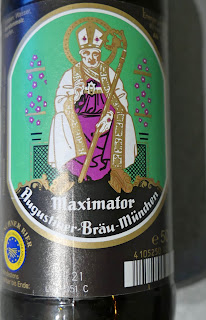 It’s the “Max” and it’s got a dark amber robe; tall, dark and handsome could well describe this Dopplebock from a monastery brewery. There’s a soft bubbly head that slowly, quite slowly, sinks down to the liquid mass.

The aromas are complex: figgy sweet, caramel and herbal notes too in the melange. And it continues dark and sweet (balanced) on the palate, from first sip until the swallow, smooth and intense, the malt a delicious factor, the alcohol also a pleasant factor in the unusual experience. Not your normal lager but one well worth trying.

They recommend it as “perfect for celebratory occasions during the colder parts of the year”.

No wonder the malt is key here. Augustiner is one of the few breweries in the world “that has a considerable output to operate its own floor maltings”. The maltings in the cellar of the brewery building are probably the largest in the world. Here, the grains are spread out in thin layers on special Solnhofer stone slabs on the floor and continuously turned mechanically. Although this process is highly labour intensive, the malt produced is of the highest quality. As is the beer.

Check A Quart of Ale± #37 https://www.corkbilly.com/2021/03/a-quart-of-ale-37-moving-on-over-to.html for details on another Augustiner beer, the Edelstoff. 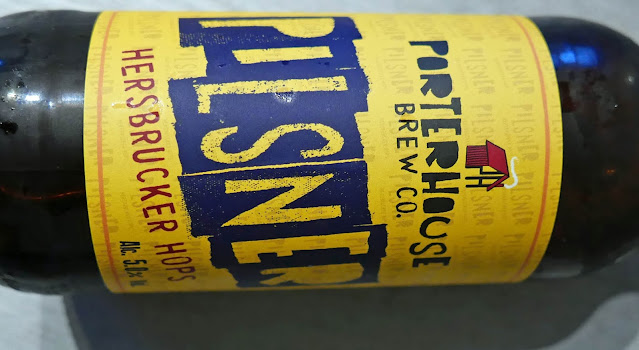 This lager in amber, with a soft white top, comes from a proud Porterhouse. “Fear no more, Porterhouse Pilsner is here.”

The depth of malt (Lager Malt, Cara Malt, Vienna Male, Munich Malt) shows up in the aromas and then paces smoothly across the classic palate where its got active company from a posse of hops (Galena, Nugget, Hallertau Hersbrucker, Hallertau Perle). An irresistible double act.

Amber? Yes. But you don’t have to a gambler to land on the jackpot here. And when you do, you’ve got strong reliable company for a seriously good session. Cheers. 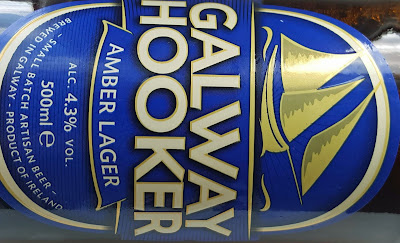 It’s a gorgeous amber, clear with fountains of bubbles rising up towards a slowly sinking white head. A taste (a fingertip dip) of the foam tells me its dry, with hops and malt in harmony. And so it is. Very well balanced indeed with a refreshing edge to cut and a good finish as well, clean, crisp. Perhaps the best of the three core Galway beers tasted recently.

It is close to the Vienna style, very close, smooth with a good nutty malt flavours and with just sufficient bitterness on the palate; it is full bodied and fits into the session category too. And if the session calls for some food, then spicy foods, chicken, pizza are recommended.

They say: We are an independent artisan brewery based in the west of Ireland dedicated to the production of high quality, natural and full flavoured beers. All of our beers are craft brewed by combining the finest ingredients with traditional brewing techniques. The result is a beer that has received numerous awards, including being twice named as Ireland’s Best Beer.

We consider beer to be like any other food: the fresher and less processed the better. Our beers are therefore devoid of any preservatives and are brewed using only malt, hops yeast and water. We are passionate about producing exciting and innovative beers that are bursting with flavour and character. Galway Hooker was the first permanent pale ale to be produced in Ireland and is widely regarded as a leading light in the Irish craft beer sector. It has now firmly established itself as a favourite amongst beer enthusiasts. Our flagship beer, Galway Hooker Irish Pale Ale, is available nationwide in both bottle and draught.

The brewery was established in 2006 by two first cousins, Aidan Murphy and Ronan Brennan. Aidan has over ten years experience in the brewing industry and has worked in several breweries around the world. He also holds a master’s degree in Brewing and Distilling. Ronan takes care of all their customers. Their flagship beer, Galway Hooker Irish Pale Ale, is available nationwide in both bottle and draught.