A Quart of Ale± #49. On the craft journey with Wheat/White, an Irish and German mix here.

On the craft journey with Wheat/White, an Irish and German mix here.

Heaney’s Irish White Ale is hazy; colour is a pale yellow and the white head doesn’t hang about. Hints of pine and a burst of citrus fruit. The malt, which also gets a show in the aromas, is prominent in the mouth where it matches up well with hop bitterness. Lots of late hop additions for a lively citrusy punch in this fresh and zesty white.

They say: A versatile beer that pairs well with many foods. Try with a Fritto Misto.

Other suggestions include lighter curried dishes, chilli or game, like pheasant or duck. Dim Sum could be added to the list too.

The label tells us this is a Wit Beer with orange peel and coriander.

Wheat or white beers originated on the continent and many have prominent clove and banana in either the aromas or palate or both. Not too prominent here though, certainly not banana, clove has more of a presence. Heaney have put their own stamp on this White. And quite a good one. And there is certainly room in Ireland for a good one. 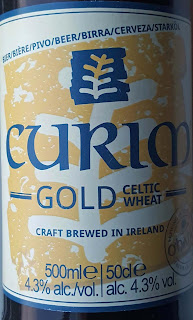 Colour is gold, tending towards copper, with an attractive white head steady on the top, and shoals of little bubbles rising though a slight haze. A touch of fruit, including banana, in the aromas. O’Hara’s promise a “slight tart residue” and that is the case on the palate leaving the fruity flavours still in the picture but in a diminished role. The banana, peach and plum though are still there at the finish while the usual clove seems to more or less out of the picture all through.

Quite a good robust beer that has been on the O’Hara list for a long while now but it is indeed some distance from your typical German wheat beer, which is a somewhat gentler experience. Check it out sometime against the Ayinger Weizenbock (below) and your senses will soon inform you.

Food Pairing- Truly refreshing, Curim Gold is an excellent accompaniment to hot and spicy dishes. A few years back, I enjoyed it with Porcini Mushroom Ravioli in a game broth with shredded duck leg and celeriac remoulade. Glass- Curim Gold Wheat Beer glass.

Muddy amber is the colour of this Rothaus beer from Germany’s highest brewery by elevation, at 1,000 meters above sea level. Situated in the beautiful Black Forest, the brewery was first established in 1791. Today, Rothaus claim to be one of the most successful breweries in Germany, largely due to the high quality of their products.

There’s a soft foamy head, white, above the haze, and it stays around for a spell. Aromas are intriguing: clove, honey, as well as the ripe peach. Some mix, and you meet much the same on the palate. Quite fruity then but no sense of sweetness and this fresh beer hints at summer days in the garden, in the beer garden (hopefully) rather than just in the back garden.

The label icon, “Biergit” (beer girl), a Black Forest girl holding two glasses of beer, first debuted in 1956 and is now the defining symbol for all beers made for the Rothaus Brewery.

The brewery points to “the best ingredients” as the big factors here:  Noble wheat malt, the purest spring water from the Upper Black Forest and mild hops with our aromatic hops from Tettnang and Hallertau ensure this”.

Pale yellow, hazy, with quite a decent white head. Expected aromas of clove and banana. Smooth on the palate, again with clove and banana, now with fresh bread added and a background of tropical fruit. Rich and vibrant and harmonious all through. Didn’t see an IBU count but bitterness feels modest and there is a refreshing dry and long finish. A very satisfying beer indeed.

They say: Our winter specialty is brewed with four different malts and wort separation method. The result is an alcohol degree of 7.1% by vol. and the Original gravity is 16.5°plato. Ayinger Weizenbock is a top fermented and unfiltered wheat bock beer. Available in 0.33l Vichy bottles.

The weizen-bock style is relatively uncommon, even in Bavaria: they are wheat ales (weissebeer or weizen beer) that are brewed to be as strong as a bock - with corresponding fuller body, and enhanced flavours. They can be pale ("helles") or dark ("dunkles"), and Ayinger Weizenbock is pale in colour.