A Quart of Ale± #50. On the craft journey with Dungarvan Brewing and their move into canning. 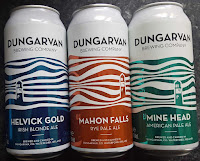 A Quart of Ale± #50 On the craft journey with Dungarvan Brewing and their move into canning. 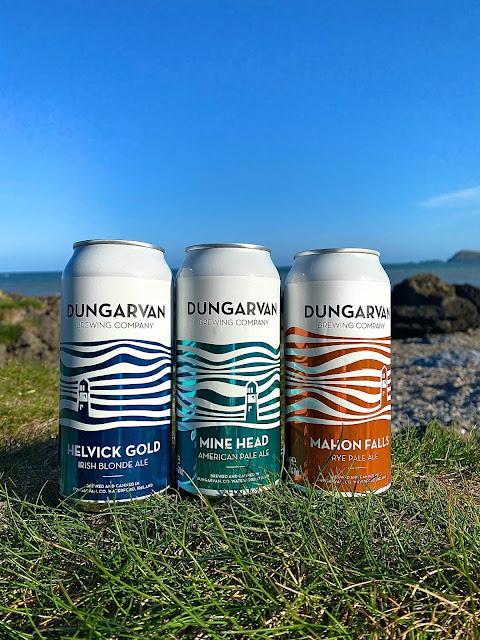 Claire Dalton, one of the four founders of Dungarvan in 2008, is delighted with their very recent move to canning their beers.

We asked the beer sommelier and Irish Food Champion why Dungarvan were a bit behind the curve with regard to canning. What persuaded you to make the move?

Claire: We've always been a bottled product and considered ourselves 'bottled
first' and use a bottle conditioning process where the beer undergoes a
second fermentation in the bottle, which gives the beer its fizz. We
could see the growth in cans over the past few years and it was
something we wanted to look at doing, and the question was whether we
changes our process, invest in conditioning equipment etc to give it a
go, outsource the production to another brewery or look at using our
current conditioning process and seeing if that works in a can. The
issue was getting a small enough piece of equipment to trial it on
before 'going big' so this is why it's taken until now to get our beer
into a can! We've been able to rent a hand canning system to do trials
and get our first batches out on which is great as it's meant that we've
kept our production in house, which is something we've always been proud
of, and been able to keep using our natural carbonation process.

Q2: Can conditioning was the aim. It took you a while to crack that? Did the experience of any other brewers help you come to a decision.

Claire: We started looking into the can conditioning process initially by

it.  We chatted to a few people in the industry who were doing can

same system as us.  Shane was a great help, even taking a late night

phone call when the machine was being temperamental for us!  Can

Ireland so there was a great sense of pride in this as well.

Q3 - You are obviously happy with the outcome? How have they been received by customers?

Claire: We're delighted with the outcome, both with the beer and the

branding.  We had a clear idea of what we wanted with our branding,

without knowing what the final look would be, in that we wanted elements

of our existing bottle branding but a much more pared back, contemporary

look.  I think we've really gotten back what we asked for, and the

bottles and cans can sit side by side with each other. The reaction to

both the beers and branding has been great so far, it's been so lovely

reading all the kind words people have sent about them.

Q4 - What’s your own favourite? What beers are next in line for canning?

Clare: Never like choosing a favourite!! But of the three we released it was

lovely to have Mahon Falls again as we've not done it for two years, and

I do like a rye beer.  Our plan is to launch more of our core range into

cans each month and then get some one offs and new brews going!  Our

June releases are scheduled to be our Greenway beer, which has kind of

become our summer seasonal for the past couple of years, and our alcohol

branding for and are looking forward to that one.

Q5 - Do you have a mobile canning contractor calling or did you invest yourselves?

Claire - We started off on a rental unit, which we are still using, to test 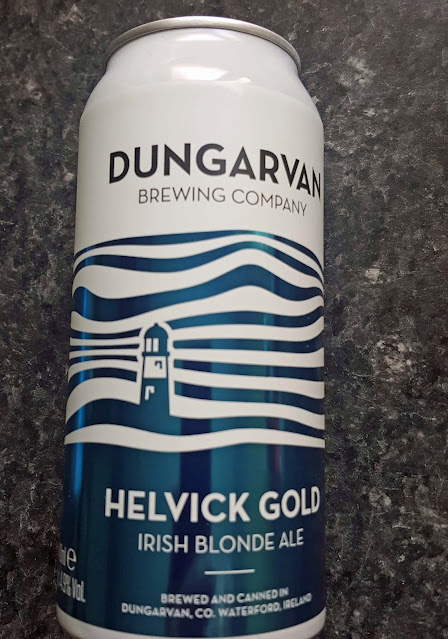 The first beers to be released by the brewery in cans are core range beers Helvick Gold and Mine Head plus the re-release of springtime favourite Mahon Falls, a Rye Pale Ale at 5.1% abv. The beers are widely available via Fourcorners; I bought my trio at Bradleys

Light gold is the colour of this Helvick Head, a Dungarvan blonde ale, named after a local landmark. The old finger test on the frothy white head, indicates a balanced beer with fruit and hops to the fore, the fruitiness in the aromas, the hoppiness more on the palate. “Our blonde ale is not a bland ale,” they, rightly, declare. It’s a flavour-packed ride all the way to a refreshing dry finish. The craft beer beginner will find some other beers better to start off with but this will keep the more experienced very much onside.

They say: Helvick is a great summer’s day drink, perfect for cracking out at the barbeque. Enjoy at cellar temperature (8—14°C) or cooler for a great warm weather thirst quencher. It’s an excellent beer to pair with food and works particularly well with spicy food.

And that food? Good with spicy foods, or try it with seafood — the citrus of the cascade hops provides the perfect accompaniment to fish and shellfish without overpowering the flavours. Goes well with a variety of cheese also. Check it all out here . 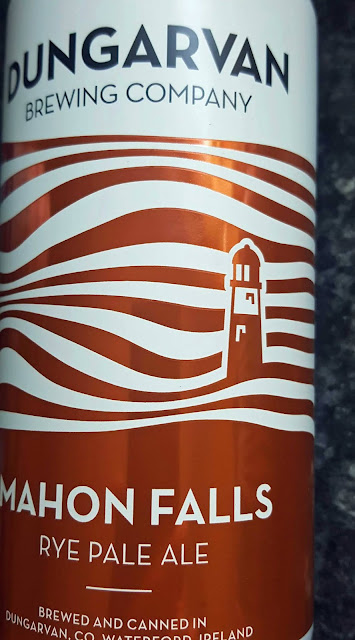 Mid gold with a touch of amber is the colour of this Rye pale ale from Dungarvan, again named after a local landmark. This is a seasonal release and the first such to be canned by the brewery. It’s got a soft slightly off-white head that hangs about as the bubbles power up. Aromas are citrus-y with a touch of spice. It is fruity and fresh on the palate with a malty background. Lots of irresistible flavour here, amazing harmony throughout, and a refreshing rye bite at the finale.

They say: March 2019 saw the fifth bottle release of our spring seasonal, Mahon Falls Rye Pale Ale, which was first served at festivals in 2012 and went on to become our annual spring release after. Following a two year hiatus, we are delighted to welcome the spring once again with this punchy rye ale in can form.

Best served lightly chilled, from 8-12°C. Try with lighter-flavoured foods  like chicken, pork and fish or even with salad dishes. Its fruitiness works really well with the tang of a Wensleydale or Caerphilly style cheese. Try Knockdrinna‘s Laviston or The Little Milk Company‘s Brewer’s Gold.

As with all Dungarvan beers Helvick Gold contains a vitamin-rich yeast sediment in the can which is a by-product of the natural carbonation that occurs in the can. To pour a clear pint, pour out in one go and leave the last drop in the can. However, this is purely for aesthetic reasons and the sediment is absolutely fine to drink. 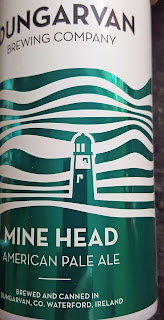 If you’re going make an American Pale Ale, then it’s going to contain Cascade. Dungarvan though went solo, only Cascade here, and you notice it straightaway with that initial hoppy hit in the aromas, rising from a cloudy body topped by a soft and sinking head. That hoppy hit is easily confirmed by the old finger in the head test - stick it and suck it!

They say: This is a classic American style pale ale made using only cascade hops, and also dry hopped with Cascade to impart fresh hop aromas. Released in summer 2014, this is now a full time part of of our core range and available in keg, bottle and now in can year round.

And it is citrus all the balanced way, a teeny touch of marmalade sweetness later on and nothing really bitter at that stage. A pleasant and harmonious bottle, sorry can, indeed. Another one for your short list.

Best served lightly chilled, from 8-12°C and you’ll find it versatile at the table,  working well with lighter fish or with earthy meats such as lamb or beef. Also excellent with spicy Thai or Vietnamese food, or keep it American with a burger! Great with a creamy camembert-style cheese or a tart sheeps cheese. 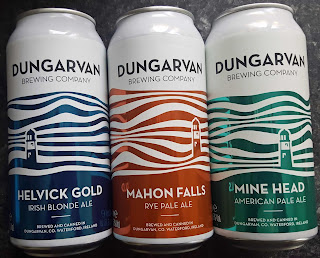