A Quart of Ale± #53 On the craft journey with a handy quartet of IPAs. 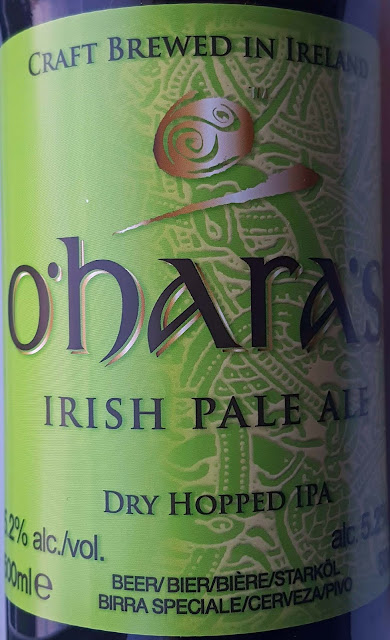 On the craft journey with a handy quartet of IPAs.

Colour of O’Hara’s Irish Pale Ale is a light and bright copper with a soft white head that soon thins down. It may be an Irish Pale Ale in title but their description is “A Contemporary style IPA with an Irish twist. Combining the balance of European IPAs with the generous dry hopping of American pale ales (APAs), this beer is everything an IPA should be and more.”

Aromas, a mix of floral and fruit, are fairly intense. And that citric zestiness is more pronounced in the palate. Excellent body and the refreshing bitterness persists all the way through to the satisfactory finish. Quite a beer with inputs from both sides of the ocean, rich, smooth and balanced, one that I very much enjoyed. Mid-Atlantic?

Most of you probably know how IPA came about but just in case:

The term "pale ale" originally denoted an ale that had been brewed from pale malt. During the British colonial period in the late 1800s demand grew for export pale ales and a strongly hopped pale ale was developed, hops being a natural preservative and a higher abv lending the beer style better suited to the long voyages, particularly to India, hence the style name IPA.

Works incredibly well alongside the BBQ, with spicy food and shellfish.

Carlow Brewing Company, also known as O’Hara’s Brewery, is an independent, family-owned business established in 1996 and one of the pioneers of Irish craft brewing. Located in the heart of Ireland’s traditional malt and hop-growing “Barrow Valley” region which has strong historical linkages to the Irish brewing industry, “we are proud to have been at the forefront of the new wave of Irish craft brewing for 25 years. As a craft brewery we brew our beers true to the tradition – with taste and flavour.” 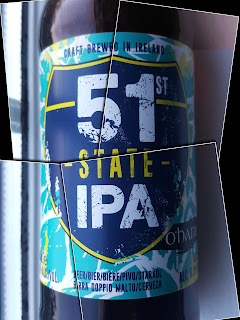 Colour of this “attack on the senses” is a mid-gold, with a long-lasting white head. Bubbles galore rise through a light haze. Aromatics are intense, exotic fruits leading the way. The big aromas continue with the big flavours in a smooth sensation right to the finish. Citrusy and soft and very very quaffable indeed.

They say: Bursting with bold tropical flavours of grapefruit, passion fruit, apricot and peach, this unfiltered IPA, which takes its inspiration from the New England IPA style, is an attack on the senses. A carefully chosen hop blend provides an intense citrus aroma while adding a well-balanced yet mild bitterness. Malts are combined to deliver a smooth mouthfeel.

The addition of lots of different hop varietals late in the boil help achieve the big aroma and flavour. Further enhanced by later dry hopping with Citra and Amarillo while “generous additions of wheat, crystal and caramalt make this beer very smooth on the pallet (also on the palate!)”. They also make a session version of this, with a 4% ABV.

Amber is the colour of this one, couldn’t even tell you about the head as it vanished so quickly. Checked it with a robust second slash later on and it is (barely) off white and with some little lasting power.  Aromas are reticent, a vague hint of tropical fruits. It is soft in the mouth and soon you know you have a pleasant ale, one without extremes. Passionfruit and grapefruit flavours are moderate and there’s a slightly bitter finish but the balance is superb, harmony all the way.

I like this one, an excellent beer for an evening when the conversation is pleasant, not boisterous nor cranky, the kind of evening most of us like.

Food suggested by the maker: Pair with salty or fried foods. Recommended with red meat.

They say: At Brewmaster we develop unique recipes with a modern brewing style to create sessionable and refreshing premium quality beers. Dundalk Bay Brewery and Distillery is a family company that started from a vision and passion for building breweries and distilleries. The idea came about when one day we decided to take a leap of faith and build our own showcase living and breathing brewery and launched our premium Irish beer, Brewmaster.

The journey has continued since when they developed a Gin Distillery and subsequently Ravenrock Premium Distilled Irish Gin was born in January 2020. The expansion continues… 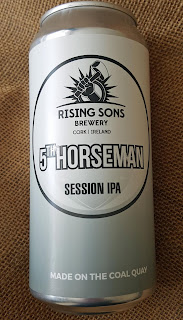 Light gold is the colour of the 5th Horseman, a session IPA from Cork City centre brewery The Rising Sons. Nice white head’s not for staying and you’ll see plenty of bubbles rising in the slight haze. The aroma signalled that this is decently hopped and so it proved and the lower strength does not mean less flavour. Aromas (fruit and hints of pine) are rather intense and the palate follows suit more or less, lots of flavour (citrus, melon) in a lively background, the finish also good and hoppy. A very friendly beer indeed and should take you through a session comfortably. Glad they’re selling their beers in cans. While they have a dozen or pubs scattered across the city, not always easy to get down and sample the draught.