Ummera's Anthony Cresswell (right) is a happy man today as his Irish Smoked Irish Organic Salmon is awarded 3-stars at the Great Taste Awards. Ten years ago, his Smoked Duck won a similar award. Ummera is just one of an amazing 396 Irish based winners this year. 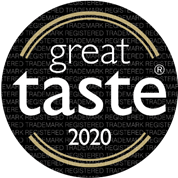 Following 14 weeks of judging, the results of the world’s most trusted food and drink awards, Great Taste, have been released, with many producers in Ireland now celebrating. Out of a record breaking 12,777 entries from 106 different countries, 42% were awarded a highly prized Great Taste accolade and a remarkable 396 are based in Ireland.

Among the Great Taste 3-star winners from Ireland are a number of traditional products that make the most of what the land and sea provides, including; the “plump, glossy, soft and remarkably sweet” Carlingford Oysters from Carlingford Oyster Co, “a real taste of the sea” that led one judge to say, “it is hard to imagine better tasting, better looking oysters”; a “simple but really well made” Gooseberry Spread from Crossogue Preserves in Thurles, Co. Tipperary, praised for having “notes from the flesh, skins and pips all present” and ending in style with a “lovely hedgerow finish”; and Traditional Ham on the Bone from James Whelan Butchers in Clonmel, Co. Tipperary, a “whopper of a ham with a light piggy aroma” and “oozing pig flavour”, with the judges agreeing that this “was obviously a happy pig.”

While these producers enjoy their success and begin displaying the unmistakable gold and black Great Taste logo, with 1-, 2- or 3- stars, on their award-winning products, they will wait with much anticipation to see if they also scoop the top awards for their region. These final honours, including the Great Taste 2020 Supreme Champion, will be announced at the virtual Great Taste Golden Fork awards event, set to take place in October.

Recognised as a stamp of excellence among consumers and retailers alike, Great Taste, organised by the Guild of Fine Food, values taste above all else, with no regard for branding or packaging. Whether it is cake, coffee, kippers or kombucha being judged, all products are removed from their packaging before being tasted. The judges then savour, confer and re-taste to decide which products are worthy of a 1-, 2- or 3-star award.

This year’s winners have been found through a combination of remote judging and socially distanced judging sessions, after the lockdown began just one week into the schedule. This necessitated a swift and comprehensive reinvention of the Great Taste process to ensure that robust judging standards were maintained and the quality of feedback was not compromised, all in time to provide a much-needed boost for food and drink producers during the all-important Christmas period.

Details of this year’s winners can be found at www.greattasteawards.co.uk and a wide range of award winning products are available to buy in delis, farm shops and independent retail outlets across the country.

Facts and figures about Great Taste 2020:

As the judges searched for the stars of 2020, waste was kept to a minimum, with unused products being donated to local food banks and hampers made up of excess products for local businesses to raffle in aid of charities. No plastic plates or cutlery were used during the judging rounds, reducing plastic waste by almost 100%. The Guild of Fine Food also donates surplus computer equipment, used to record the judges’ comments, to community-based projects across the UK, which are then refurbished and used to facilitate after school clubs and many other initiatives designed to support underprivileged families.

A full list of winners is available from sam@freshlygroundpr.co.uk.