An invitation to visit Fernhill House Hotel in Clonakilty was immediately taken up and we spent an very interesting few hours here, much of it in the company of our host Michael O’Neill, the fourth generation of the family who have been here since the 1940s. The original house itself was built in 1826 and the hotel has grown up around it. And it all sits in the middle of 14 acres of gardens in 3 sections, one managed, another semi-wild, and the other part more or less wild. Michael took us through the house and gardens. 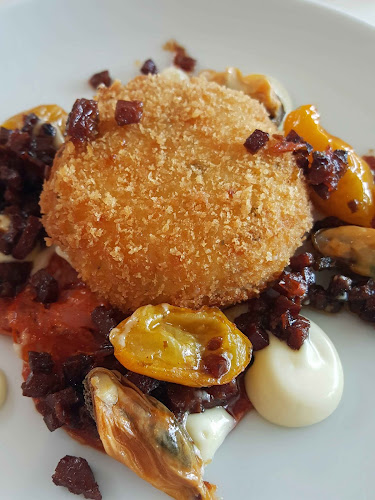 Fernhill has historic connections. The man credited with the foundation of social justice in Australia was born here. His son, Lord Atkin, is credited with the initiation of compensation for civil claims, the famous case of the snail in the bottle of ginger ale. Michael Collins, who lived close by, visited here and, during WW2, the Irish army were billeted here.

Strong literary connections also, ranging from Margaret Wolfe Hungerford, the Victorian novelist, credited with the phrase “beauty is in the eye of the beholder” to Louise O’Neill author of the bang up to date “Asking for it”. We’ll return to the house and gardens in future posts.

After our tour we sat down for lunch in the bright and airy dining room. The menu was encouraging, full of local produce, from the likes of Gubbeen, Cashel Blue, O’Neill’s Black Pudding, Shannonvale, Toonsbridge, Macroom Buffalo, Michael Twomey, Union Hall, not to mention herbs, veg and fruit from their own garden.

Loads of choices in the starter section. Everything from soup to large plates and also sandwiches and salads and various combinations on offer.

And my Salt Cod Fishcake (chorizo and sun-dried tomato dressing, confit garlic aioli, pickled  mussels) was also excellent. A superb combination of flavour, texture and colour, a class or two above your regular fishcake offering.

The Beef Burger, with Michael Twomey’s Wagyu beef starring, was a very tempting dish on the mains, again quite a list of choices. My pick though was the Roast Agnus Feather Blade of Beef (crushed potatoes, creamed carrot and horseradish, rainbow carrot, jus roti). Very happy with that too, since again the accompaniments enhanced the leading element.

And contented sounds too from the other side of the table where CL was tucking into her Slow Cooked Barbary Duck Leg (sautéed potatoes, confit onions, buttered Savoy cabbage). Both dishes were excellently presented, nothing too fancy but neat and tidy.

We had seen apples and white raspberries growing in the garden during our tour and they turned up in the dessert menu. The Fernhill Orchard Apple Lattice Tart (served with crème anglaise, Ice-Cream, and apple crisp) made the most of the freshly picked apple while the raspberry appeared in the fruit that came with the Peach Crisp, also served with crème anglaise, Ice-Cream plus a shortbread biscuit. Lovely and warm, just like the sunny scene outside.

If you come here in the winter, or in future winters, the heat you notice originates in the garden. The O’Neills are very much into sustainability. On the walk, Michael pointed to a series of terraces on a slope near the river in the glen. Here, trees are being planted and each terrace will be harvested (and replanted) in rotation with the timber going to the hotel’s wood-burner.

There is so much going on here…

In the garden alone, you’ll see a stone circle (where Yoga sessions are held), an Ammo bunker from WW2, lots of apple trees interplanted with support plants, permaculture, those terraces of timber, and the impressive wedding facility. The plans of garden designer and artist Mary Reynolds are taking shape here but it is early days yet. You can take you’ll be seeing more and more native Irish flowers, plants and trees. So much to look forward to.

Read more about the house and its superb gardens here.