Fernhill House Hotel. Its history and its beautiful gardens. 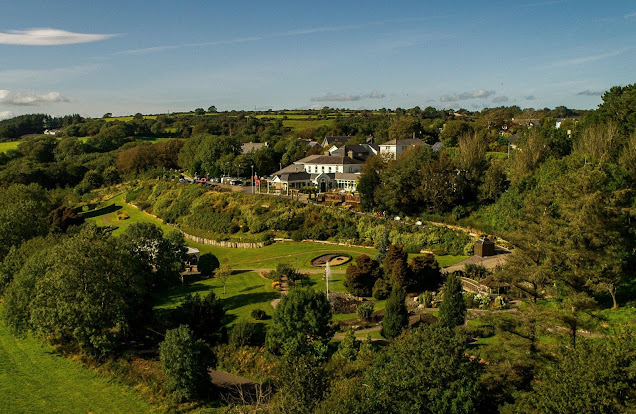 You notice the ferns straightaway. After all, they are planted in groups around Fernhill House Hotel in Clonakilty. And, of course, in the 14 acres of gardens, (itself divided into three sections: managed, lightly-managed and wild). Garden Designer Mary Reynolds has plans and, because Fernhill is a great wedding venue, ferns just have to be included.

The first reason is that they’ve always been here and the second is one of Mary’s inspirations. Cloich na Coillte is the Irish name for Clon and means ‘Stone in the woods’. Ferns help form the carpet that clothes the earth as part of  healthy woodland, covering the ground in a soft carpet of feathers. “In ancient Ireland, every plant was associated with certain energies. Ferns represent marriage and the secret bond of love. The gentle unfurling of the fern fronds symbolise the slow blooming of love in a committed relationship.” 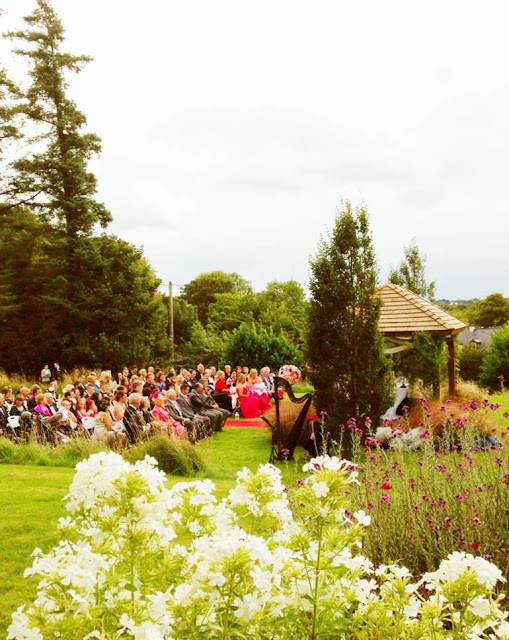 And so couples come from all over West Cork to get married here, sometimes in the more managed part of the garden. Here, their photographer has some amazing backgrounds to work with, especially at dusk when parts, including the little bridge, are highlighted by fairy lights.

And, on the Valentine’s Day after their wedding, the couple are invited back to plant an apple tree.

Our September visit to Fernhill started with a warm welcome from Michael O’Neill (jnr), the fourth generation of the family in the hotel. The hotel is built around the original house which dates from 1826. The Atkin family were the first owners. They didn’t have much luck on the male side. When the father died, the family, including Robert Travers Atkin (born Fernhill 1841) went to Australia where he went on to be “the founding father of social justice” in that country. He too died prematurely and the family headed for England. Here, a son of Robert’s became Lord Atkin and was directly responsible for opening the way for compensation claims.

The Wrights and the Cowpers were other families associated with the house as the 19th century closed and the 20th began. Michael Collins was a visitor in 1920 and, during the war, the Irish army were based here (an ammunition bunker from that time still stands here). The mansion house was bought by M.J. O Neill in the 1940’s and was turned into a hotel by his son Con with his wife Mary in the 1960’s.

The hotel has “grown” around the original house and so too has the wedding business and the garden is a key part of that. But the 14 acres accommodate much more nowadays. Many apple trees grow here and other fruit as well.

And expect to see many varieties of Irish trees and bushes under Mary’s direction, even if there are many here already. And not planted willy nilly! During the tour, Michael explained that they use a layering system with bushes or small trees in the first row, medium sized specimens  next and then the tallest; always with the aim of keeping compatible species close to one another.

We had just 30 minute for so in the garden but you could spend all day here to take in all the detail. As you move from the more fully managed area to the semi-managed area, you come across their stone circle (they built it themselves - it’s not an ancient one!). Here in the grassy circle on certain days you will see a group doing their yoga. 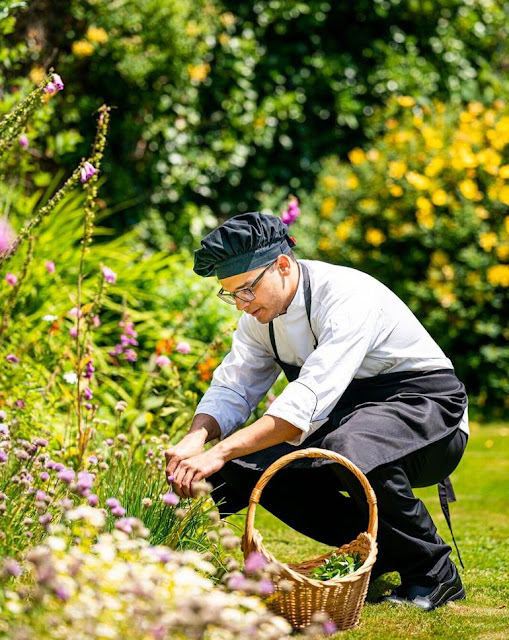 Move on a little further and you will hear the calming sound of running water as the river flows down the glen. Just sit here and relax. Indeed, forest bathing tours can be arranged here. Michael said he slept like a baby after his first experience of the bathing. Foraging tours are also done here, the schedule somewhat curtailed these Covid days, so do check availability with the hotel.

Listen to the birds and see those layered ranks of trees and imagine how they’ll look in the future. And as you stroll up the slope, note the series of terraces near the river. Here, trees are being planted and each terrace will be harvested (and replanted) in rotation, with the harvested timber going to the hotel’s wood-burner.

The family are much into sustainability. They have solar panels in place and have their own sustainable water supply. Michael jnr himself is a director of Sustainable Clonakilty and was a board member of the European Union’s EDEN group. His group had plans to plant no less than 10,000 tress locally this year until the Covid interruption but, still, they managed to get most of them into the ground. 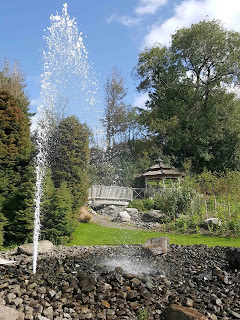 Michael is also a keen historian and his starting point is the house. You can read some of the early details in our first post on our visit here and you’ll know that quite a few well known people have been through its doors. The early families, who lived in the 1826 built mansion and its then 1,257 acre estate, were part of the landed gentry. They had lawn tennis courts, a cricket pitch, a four storey castle tower, an ornate orangery and more. In fairness, they also ran a soup kitchen to feed the starving during the famine.

What may not be so well-known is that Fernhill has quite a literary connection as well, ranging from Margaret Wolfe Hungerford, the Victorian novelist, credited with the phrase “beauty is in the eye of the beholder” to Louise O’Neill author of the bang up to date “Asking for it”. Louise, by the way, is a cousin of Michael’s and a great grand-daughter of MJ who purchased the house in 1946.

Michael has put together a folder showing other literary connections with sites that relate directly to the history of Fernhill and its surrounds.

Louise O’Neill - Almost Love and Asking for it

James Douglass - JFK and the Unspeakable

Henry Ford - My Life and Work

Michael had arranged lunch for us but before that he had another little surprise. He showed us some pretty old scrapbooks, full of newspaper cuttings. As with many such collections, the dates had been trimmed from the scraps but, judging by some that still had dates, it seemed they were collected in the early decades of the 20th century.

There were a few recipes that caught my eye:

Roes and Mushrooms on Toast.

Needless to say, none of those were on the day’s lunch menu! It was a meal that we enjoyed very much indeed and you may read all about it here.