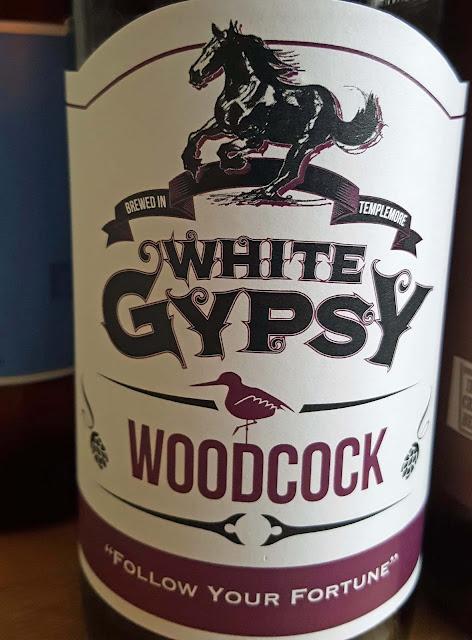 Gold is the colour of this ale from West Kerry. Creamy rather than crisp, yet light and refreshing with malt prominent earlier on, the hops making a show at the finish. A distinctive beer indeed, very impressive.

I drank this in 2012 at Blair’s Inn and also during a visit to Tigh Bhric where the brewery is based. It was then being described as a pale English style bitter. It was then, still is, a light and refreshing golden ale with a slight malty sweetness and a bitter finish, imparted by a generous helping of hops. Indeed, one could see why the English aficionado would feel at home here. 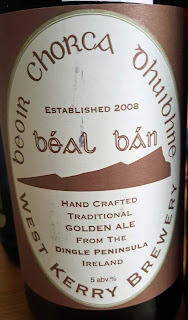 Paul and Adrienne (the brewer) told us that they use water from their own well to brew the beers, both cask and bottled. The malt is predominantly Irish and the beers are brewed naturally, with no additives or preservatives. By the way, they use local botanicals in the brewing, such as rosehips, elderflower, blackberries and black currants “added to our seasonal beers”.

Beoir Chorca Dhuibhne is the Irish name for the brewery in the Dingle peninsula. It was established in 2008 to make traditional yet progressive beer. You’ll find them in their brew pub: Tigh Bhric (which also offers accommodation). .

Béal Bán is one of their core range and like the others, Carraig Dubh (porter) and Cúl Dorcha (red ale), is called after local place names. Adrienne is Ireland’s first female brewer.

Colour here is almost gold, lighter than the Kerry ale, darker than Kinnegar. Hops and malt in the aromas. Fruity and refreshing with the hops and malt in excellent balance, each contributing to the pleasant journey through to the finish.

The Gypsy invites you to follow your fortune to this independent Irish craft brewer in Tipperary. This ale is named after a local legend: “The Woodcock Carden”.

There’s a bit of Greek on the label - didn’t have time to google it! But they do tell us that this is brewed with the finest malt and hops with the aim of making “a nicely fruit forward refreshing ale”. Ingredients include: Floor malted Marris Otter barley, Citra and Mosaic hops.

Did you know that White Gypsy make a food pairing range of beers in 75cl bottles. Well worth checking out, more info here.

Must say I was very pleased with Béal Ban and didn’t think I’d be more pleased during this tasting but the superb harmony of the Woodcock is a pleasure to enjoy and the ace Tipp beer would be difficult to top in any company. 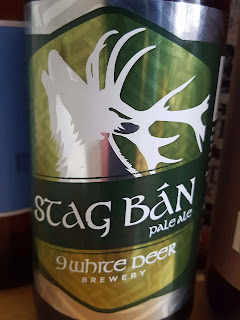 Stag Bán was the first beer for Ballyvourney based 9 White Deer and has been gluten free since 2018.

Basically, it’s an easy drinking beer, brewed at lower temperatures to create a cleaner profile; the malt profile is uncomplicated, neither heavy nor cloying. It is a dry and refreshing beer with a light malt body. The hop character is spicy citrus, finishing clean.

For me, the attraction here is the hops, though it’s far from being a “hop bomb”. This is about balance. The lads say they designed this beer with summer in mind and the hops used (First Gold, Admiral and Cascade) emphasise that. It is a harmonious drink with citrus, floral and spice notes all combining well in the golden cloudy glass. 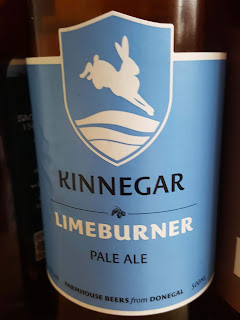 Lovely light gold colour on this one, floral and hoppy on the nose. Crisp and refreshing in the mouth with a good hoppy finalé. Easy to quaff and one to note if you haven’t already. One of their first beers and still going strong as part of their core range.

“Superb Kinnegar Ales” I wrote back in 2013, when this Limeburner was included in a selection at The Cove at Port na Blagh (Donegal). This independent Irish craft beer is named after a local 40m high hidden sea pinnacle.

It is unfiltered, naturally carbonated. When pouring leave any natural sediments (I didn’t see any) at the bottom of the bottle. It is one of their core range. Easy to enjoy this one!
9 White Deer Craft Beer good beer Irish ale Kinnegar West Kerry Brewery White Gypsy