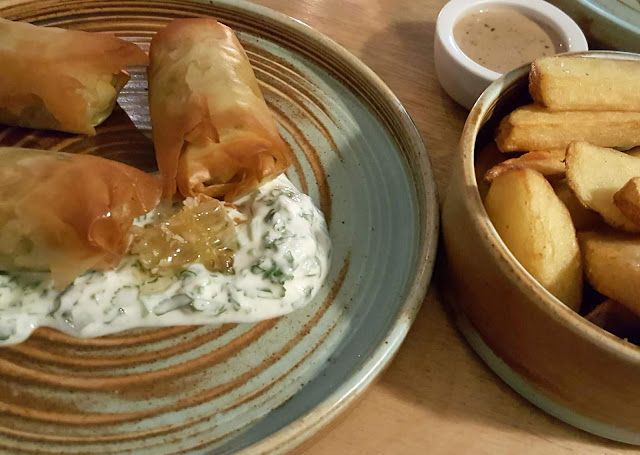 O’Mahony’s is making waves in Watergrasshill, even though it is in its early years of it reincarnation. The food offering started a couple of years back as local and seasonal, on small plates mostly, and that is still the formula, backed up by a very helpful, very well informed front of house, lots of chats, loads of smiles, a welcome on the mat and all the way through.

And there is also a huge welcome for local producers and suppliers. Their produce is carefully handled here, expertly cooked and delivered on those (not so) small plates!  It is the same with drinks. The craft beer selection includes Franciscan Well and 8 Degrees on draught, Blacks’ ales in bottle, also the Saor GF from 9 White Deer, and ciders by Stonewell and Longueville House. And don’t worry, mainstream beers are also available.

Back to the menu though. You may nibble away on marinated olives for a start. If you prefer something a bit bigger why not consider their boards: Antipasto, Cheese, or Charcuterie. We decided to share the Antipasto, a selection of dips (hummus, tapenade, goats cheese, etc, olives) with bread.

We had the car, so what would we drink? A quick answer was provided in the shape of their non-alcoholic board. It included a red wine, a white wine, even a sparkling one. The Seed-lip gin was available as were the apple based drinks (very nice too) from the local Future Orchards. Also some beers: Baltika, Heineken zero and Erdinger and a zero cider by Stonewell. The latter was my pick - it was my first time trying it. Stonewell always hit a high standard and this did the job very well indeed. CL meanwhile choose the Erdinger, probably the best of the three beers on offer.

The increasing number of local and seasonal supporters will be delighted to see the small plates list - these are basically your main courses without all the sometimes superfluous extras. You’ll note names like Jack McCarthy, Kilbrack Farm, Gubbeen, Ballyhoura Mushrooms, Carrigcleena Duck, Leamlara Honey, Hegarty’s Cheese and Fitzgerald Butchers. By the way, O’Mahony’s is also the area base for NeighbourFood through which you may also get your hands on some of these lovely products.

The menu changes regularly. There were seven choices for us and it took us a while to make up our minds. I think we could have employed the Grand National formula: close the eyes and stick a pin in the list. But we did pick a couple and shared. That is one thing about these “small plates”; they are ideal for groups who order a bunch of them and then share.

I was tempted by the Rockpool: Kilbrack blue potato, gnocchi, foraged sea herbs and poached white soul, and that seemed to be a favourite of Victor (who owns and runs the pub along with Máire). In the end though, I went for the Carrigcleena duck pastilles, Leamlara Honeycomb, coriander yogurt. The duck came in three parcels, packed with flavoursome meat and that was enhanced by the yoghurt and a small square of the honeycomb.

CL also hit the jackpot with the Hot Smoked Fitzgerald’s lamb, braised red cabbage parsnip purée and game chips. The tender meat is served pink and is the main player in a hearty ensemble, every item in the mix playing a part. And we both thoroughly enjoyed the side of excellent hand-cut chips with a punchy pepper sauce.

Now we were looking at the short list of desserts. I was seriously considering the Treacle Tart with Yum Gelato vanilla before taking Victor’s tip - he freely admits to being biased! - which was the Cardamon, Lemon Curd Pannacotta, ginger Manuka honey, jelly and tuile.  Went down every well indeed.

By the way, as I didn’t mention it earlier, they have a House drinks list here, all from neighbours. House Gin is Bertha’s Revenge (from Castlelyons) with Poachers Tonic and orange. The local juice, from Glanmire, is supplied by Future Orchards while the local cider comes from Mallow’s Longueville House. And 8 Degrees, up the road in Mitchelstown, are the producers of the House beer.

All the regular wines are available by the glass and you also have a rosé and Prosecco. On the night, the list was supplemented by a specials board that had no less than seven new wines which will soon have a place on the list. So, no shortage. And no shortage either of spirits where again, particularly in gins and whiskeys, they are strong on supporting Irish.

O'Mahony's of Watergrasshill is a family-run country pub and food venue just off the Cork-Dublin motorway (M8);  is only 10 minutes from the Dunkettle Interchange, near Cork City. The pub has been Máire's family for 200 years. Experienced Chef Jim Coleman recently joined the team.