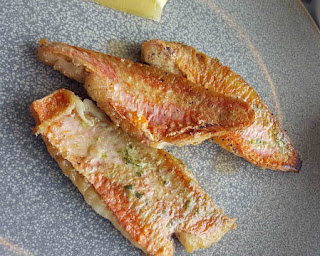 “First we eat.”
And eat they did, none of the food that appeared at their table ordered by either of them, and none of it on the Marine’s laminated menu or on the list of plats du jour chalked on the blackboard… Before one dish had been see off another arrived: flash-fried fillets of red mullet; a grilled pepper and anchovy salad des Pecheurs; a couple of pavé steaks; a platter of cheese; and, finally, baked apples in Calva.
And all the while, the two men talked. The Cabrille affair… and the shoot-out in Pélisanne.
“The old man was a psycho,’…

from The Dying Minutes by Martin O’Brien (2012). Highly Recommended.