Our Celtic cousins in Galicia, in Spain’s North West, are thrilled to know that their Irish relations are huge fans of their Albariño wines from the Rias Baixas region. Believe it or not, we are the fourth largest importers of this particular wine in the world!

It has all happened quickly and relatively recently.  “It is a young industry,” said Lynne Coyle MW one of our hosts at the Rias Baixas Tasting in L’Atitude last Tuesday, “In 1975 there were just 200 hectares of Albariño here, now there are over 4,000, lots of small holdings, cottage farming. Indeed, Lynne herself has made Albariño in Rias Baixas, on an 11 hectare vineyard “which is regarded as quite large”. 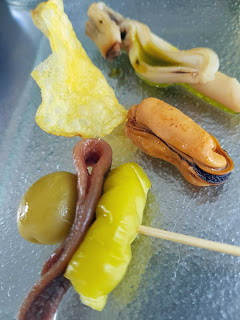 “It is not organic here”, she told us. “It is a difficult area to go organic and they focus more on improving sustainability.” One method they use is to grow the vines on pergola type horizontal trellises. This helps ventilate the grapes and also allows the farmers grow their cabbages underneath!

Our afternoon of tasting and masterclass began downstairs in the renovated and always impressive L’Atitude. Lots of chat and lots of bottles lined up on ice for a silent tasting. Not quite silent though.

They had a few sparkling Albariños on show and I immediately gave a big thumbs up to the Bodegas As Laxas Sensum  Brut NV, a gorgeous opener, from a winery in the sub region of Condado do Tea. The same winery also had an excellent still wine from 2020.

As Lynne Coyle indicated, there are few large-scale producers but Martín Códax is one and a very consistent one. The winery is named after one of the most important medieval Galician troubadours and was founded in 1986 thanks to the idea of a group of winegrowers; as a winery made by people for the people.

Their 2020 is of medium intensity with ripe citrus notes and tangerine. On the palate it is fresh with good balance and the citrus is there right through to the finalé.

Soon, maybe not as soon as planned, we were seated upstairs and Lynne filled us in on the area and later Blanca Valencia would enthusiastically tell us all about the similarities between Galicia and Ireland and also about the food of the area. And the first dish up was a beauty and typical: Razor clams, Mussel and potato crisp and a lively Olive and anchovy combo. 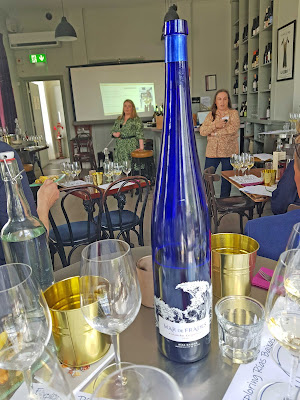 Val de Salnés, towards the north, is the main region. And it was from here and its granite soil that our first upstairs wine came from, the Mar de Frades 2020 in an eye-catching blue magnum with a big white wave splash as a label, the blue chosen apparently to remind us that this comes from the Atlantic coast where some vines have their roots in the coastal sand. And that ocean influence was evident in this dry crisp and elegant whine. “No oak, really fresh”. 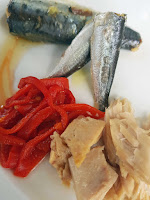 Number 2, the Granbazan Etiqueta Verde 2020, also came from this area. Citrus and floral, “with more salinity, a quintessential Val do Salnés. The other sub regions are Ribeira do Ulla, the tiny Soutomaior, Condado do Tea, and O Rosal.

Terras Gauda is perhaps my favourite from O Rosal and their 2020 tasted very well. This is, by the way, a blend. Mainly Albariño of course but with 20% Caiño and 8% Loureiro. 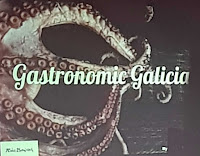 You can expect more fruit in O Rosal and Condado do Tea, maybe not quite as fresh as those further north. O Rosal still benefits from the ocean of course while planting at altitude helps keep the wines of inland Condado fresh.  One of the big takes from the afternoon was that we were learning that not all Albariños are the same, that is there is quite a variety.

Lynne is often asked what should they change to make Albariño more popular? More sparkling? The use of oak? More blending? She was emphatic in her answer: "More of the same!”

Now, as Blanca took her turn we enjoyed a plateful of mainly bonito and sardines. Delicious, as was the final plate of cured meats and Galician cheeses. She told us that the area inland was very mountainous. “But the coastal areas are vibrant and dynamic. The scenery reminds me of Ireland.”

She invited us to visit and not just for the Camino. But if you do find yourself in Santiago di Compostela, then head for the market and choose the seafood. It is not expensive. “So you don’t have to do any penance to enjoy it!”

And if you want to spend more, then there are scores of Michelin starred restaurants in the general area, one with a menu at less than 30 euro.

People are very similar to the Irish, “they don't like to say no!” Someone suggested the phrase “I will, yeah!” They love their vegetables and greens. Pork is important, veal too and the cheeses are mainly from cows milk. Albarino works fantastically well with Indian, Asian and Mexican food also.

By now we were making progress on the second flight of wines. I noted two, both citrus and dry, each lip smacking. One was the Señorio de Rubios 2020 (imported by Honest 2 Goodness), the other, regarded as a modern classic, the citrusy mouthwatering Pazo Señorans 2020 (imported by O’Briens).

Great to be back at a full room tasting again after the Covid enforced drought, not so much a lack of wine but a lack of company. And good too to have experts on hand such as Lynn and Bianca, with Lynda and Sinead of Wine Tasting Ireland keeping it all together with a pour and a laugh.