Spike Island. A great day out. So much to see and do

Spike Island. A great day out. So much to see and do

It was much different on a hot August night in 1985

Spike had by then become known as the joyriders prison. It was the place where young car hi-jackers were sent to serve out mostly short sentences, not just joyriders by the way.

The prison burst onto the TV screens and newspaper front pages in the summer of 1985 when the prisoners rioted. Not that there was anything much different as the prisoners  returned to their dorms for the night, all was calm.  But an argument quickly escalated and suddenly the prisoners were escaping from their dorms in numbers.  A major riot was underway, and the prison would never be the same again.

The Spike Island website recalls the prisoners set fire to buildings and armed themselves, and with over a hundred prisoners this was a deadly scenario. The riot continued for hours before the prisoners climbed on top of the fort's 'Mitchel Hall', where they remained for most of the next day. For more details, click here.

The riot led to the construction of formal 4 man prison cells in the 'C' class block, which remained in use until 2004 and can be seen by visitors today.  Visitors can also see the 'Riot exhibition', which tells the story. Be sure and check out the RTE video footage.

The 7” RML above represents the progression of artillery technology, with the introduction of rifling grooves cut into the barrel to impart spin and stability to the shell while in flight. Dating from 1865, three of these massive 7” guns were mounted on Spike Island, one on each of the three bastions facing Cobh. The introduction of breech loaded guns rendered them obsolete.

It is one of several interesting artillery pieces in the covered Gun Park on Spike spanning over 300 years of warfare. More here. 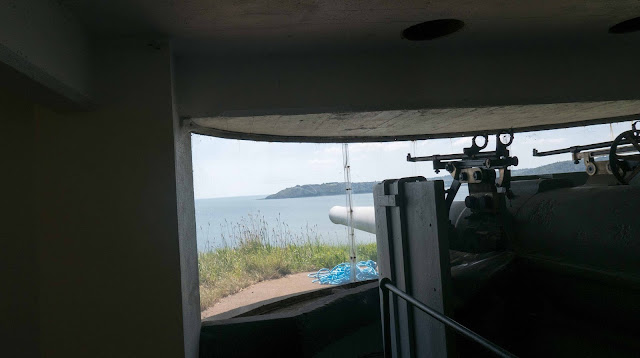 The three Cork harbour forts have had a tough morning. And it’s about to get a whole lot tougher.

But, just for the moment, the gun crew in Bastion 2 on Spike Island are feeling happy with themselves. Their six inch monster (above) has done the business, sending its massive shell out beyond Roche’s Point to sink the biggest of the attacking ships. “Poor buggers,” sympathised one gunner as he saw the flames rise before the vessel sank.

Soon though, the guys on Spike would be the poor buggers. A flight of Nazi bombers came swooping over the hill in Cobh, over the famed cathedral, and dropped bomb after bomb into the sunken fort at the top of the island. All hell broke loose!

Not really😉. Just one of those “what if” moments that comes up during a tour of Spike Island.  What if the British hadn't been so prompt in handing back the treaty ports, including Spike, just a year before WW11 began?

You can visit that gun today and see what the gunners would have seen (on a good day!): the mouth of the harbour, Camden Fort Meagher to their right, Fort Carlyle to the left. The gun by the way was never fired in anger. 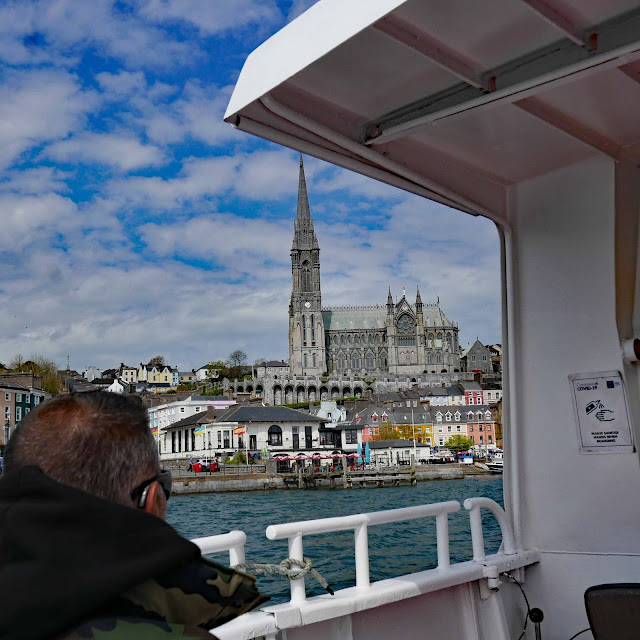 Spike Island tours depart  from Kennedy Quay in Cobh. We took the 11.00am ferry, best to book in advance particularly in high season. The trip takes between ten and twenty minutes. There is a famous sandbank between Cobh and the island, a sandbank that Queen Victoria’s ship got stuck on when she visited. When the tide is in, the ferry goes over the sandbank but when the water is low, the ferry has to circle Haulbowline Island before landing on Spike.

You are offered a guided tour on arrival. It costs nothing extra, so do take it. You will have over three hours here - sounds a lot but it may not be enough time, there is so much to see and do. The tour takes less than an hour and is well worth it. The guides are well informed, very helpful indeed. They’ll process you (you are after all their prisoner but you may smile as your mug shot is taken) and they will point out all the things you may visit by following the yellow arrows. And, like our man Rob, they'll pop up every now and then with helpful hints.

One of the highlights is the Glacis Walk. This goes around the outside perimeter of the fort, is 1.4 km long, and there are information panels on the way. Great views of the harbour here, both inner and outer. And you are left in no doubt how these big guns could control who was allowed in.

There are other walks, including one down to a group of derelict houses, known as the village. Our guide told us there were always civilians on the island. But that ended after the riot of 1985 when the prisoners marched down to the houses. The civilians eventually all moved out as a result, most of them to nearby Cobh. None of the civilians were injured in the riot as both they and the prisoners agreed that there was no issue between them.

(as seen from Spike) 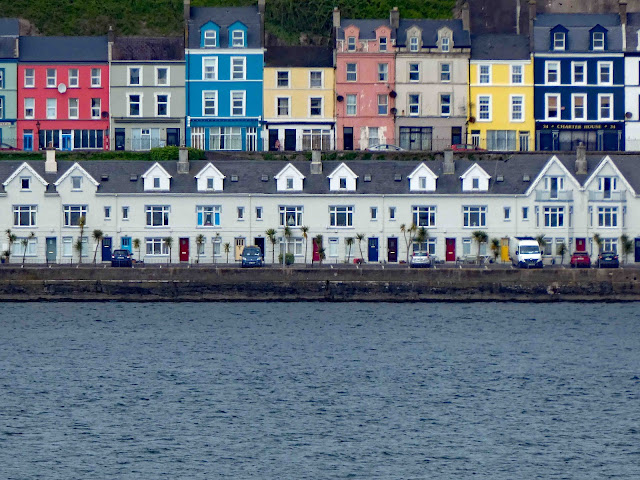 Old Cork in Colour is the title of the main exhibition now running  in Mitchel Hall. John Breslin & Sarah-Anne Buckley, who brought you the books titled Old Ireland in Colour, here bring to life the rich history of Cork and its people and its visitors through the colour restoration of these stunning images of local life and death throughout the nineteenth and twentieth centuries.
The few dozen varied photos include the last known picture of Michael Collins taken in Bandon shortly before his death. There's a striking mugshot of Jeremiah O’Donovan Rossa and no less than 10 colourised images of life on Spike Island itself. Pictures too that recall tragedies such as the sinking of the Lusitania, Then there's the guy with a hurley (that looks a lot like the "crook' that we used to fashion when we had no caman).

The exhibition, curated by Dorota Gubbins, was launched on the 12th of April and is on display in Mitchel Hall until November 2022.
Spike Island