A Quart of Ale± #106. On the craft journey with Rye River Brewing

On the craft journey with Rye River Brewing 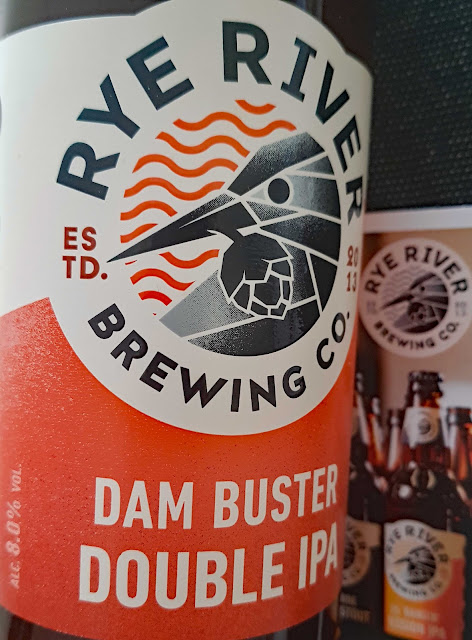 And that is where you’ll find McGargles. In bottles!

Rye River, the independent craft brewery have extend their core range to include their number one selling McGargles (with the new name of course). And more good news for McG fans is that they can still get the same beer and another plus is that it will be in bottles!

A new name - look out for the Kingfisher - but the same popular beer. Rye River have assured their fans that while the name has changed, "the beer recipes are staying exactly as they are!" And Rye River have very much enjoyed their first ten years. "We have grown to become Ireland's #1 retail brand and for two years in a row, we are also the world's most awarded brewery".

"New name for McGargles, same great beer!" Below are my thoughts on three samples of the extended Rye River range.

This Dam Buster DIPA comes in a hazy gold robe with a soft white head that hangs about a bit (having been poured from the bottle). Pine and grapefruit lead the aromas. And those flavours are also prominent with some tropical accompaniment also on the palate and a supple bitterness always a contributor. No real sign of the alcohol as this well balanced beer goes about its pleasurable business right through to the refreshing finalé (as Sean Kelly might say. By the way when is Le Tour starting?).

They say: Dam Buster Double IPA is not one to be taken lightly! This big beer weighs in at 8.00%. It also has a bundle of amazing hops including Cascade, Columbus, Centennial, Chinook and Mosaic. The taste is perfectly balanced between pine bitterness and biscuity malt. It's a whopper of a beer! 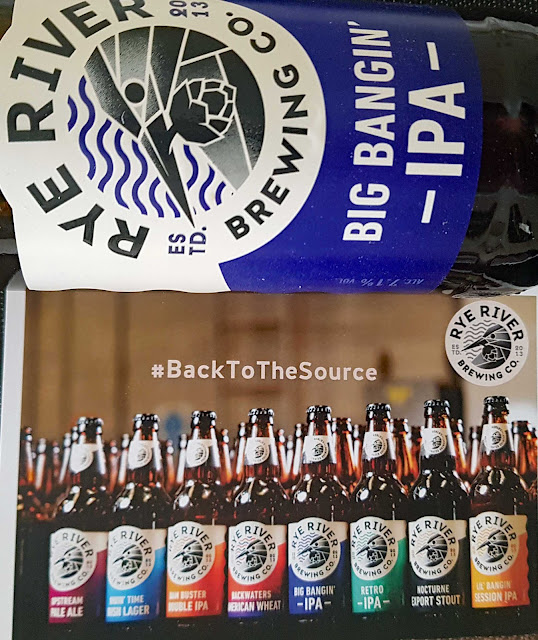 This was a very popular bottled beer under the McGargle’s label and now it is part of the Rye River core and, of course, in a bottle.

It has got a bright mid-gold colour…. bubbles galore…has been hopped to hell and you get that first via the aromas as the typical tropical fruits appear. And that exotic assault, with an alcohol powered extra edge, also appears on the palate where the Maris Otter malt also shows up well. A fruity yet dry finish follows. Quite a good finish actually, quite a good beer but do note that high alcohol count that smoothly powers it along. It’s not called Big Bangin’ for nothing.

They say: “A long standing favourite, Big Bangin' IPA is the same great beer you know and love… but now with a bangin' new look!” Just so you’ll know, it’s the one in the white and navy bottle!

They say: Our take on the US West Coast IPA style, using only the finest Maris Otter barley and heavily hopped with tropical aromatic hope varieties. 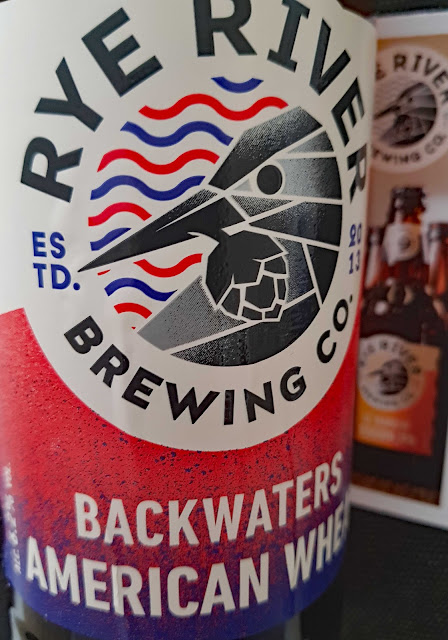 Light orange colour, white head that stays around.  Mild aromas of passion fruit and citrus, a hint of pine perhaps. The immediate impression on the palate is crisp and clean and you’re inclined to think lager rather than wheat beer. Wheat though is included in the ingredients and this is pretty well packed with refreshing flavours including passionfruit, citrus, melon and grapefruit.

No sign of the banana or clove in this American style wheat that you get on regular European wheatbeers (where special strains of yeast are used that produce notes of banana and clove as by-products of fermentation).

The hops used are both from the US, the well-known Cascade and the newer Strata. Strata has been described as “Passion fruit meets pot” and has been increasingly popular with brewers since its official release in 2018.

The brewers say: “Our Backwaters American Wheat is a crisp and clean easy sipper featuring Strata and Cascade hops. Perfect for those lazy summer days in the sun with friends”. Here’s to the sun and to the friends!

By the way. the malts used here are Carapils, Vienna Malt, Wheat and Ale Malt.