Le Caveau Portfolio Surprises include a Straw Winery and an Off the Grid Riesling. Not Surprised though by the Quality.

March 08, 2020
Le Caveau Portfolio Surprises include a Straw Winery & an Off the Grid Riesling.
Not Surprised though by the Quality. 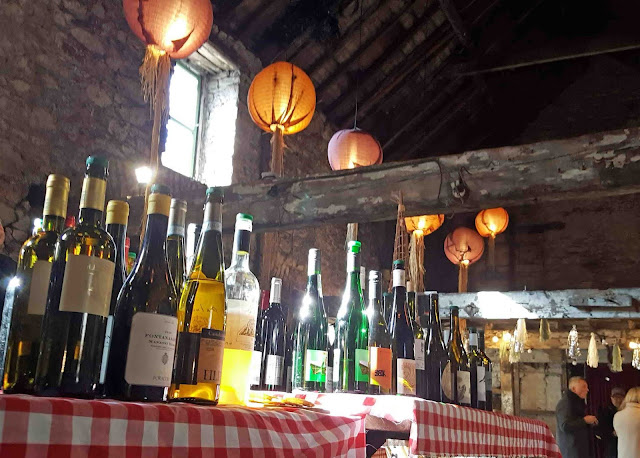 Always something interesting at the Le Caveau Portfolio tastings. After all, Pascal Rossignol’s company has some 600 wines in stock so there’s bound to be something unusual. But I wasn’t quite prepared for the winery made from straw!

Domaine de L’Achillée is the Alsace winery, situated less than an hour south-west of Strasbourg. The Dietrich family have farmed in the Alsace since 1600. These days they concentrate on grapes and other fruits and have been organic since 1999.

In 2016, the two sons of Yves Dietrich, Jean and Pierre, joined the adventure to give it a big boost, to become independent. Quickly accompanied by an equally passionate team, they built together a bioclimatic winery where they now vinify the nuggets of the family estate. Apparently, the heavily compacted straw bales are more fire-proof than the iron frame that supports them. Their website says this is the largest straw building in Europe.

And the wine? Well that was unusual also. The 2016 Alsace Blanc is a kind of Gentil with up to nine grapes in the blend. Sylvaner accounts for fifty per cent and the others are Gewürztraminer, Riesling, Pinot Blanc, Pinot Gris, Pinot Noir, with Auxerrois, Muscat and Chasselas. The wine is aromatic, floral with white and yellow fleshed fruit, with more of the same in the mouth, lively, elegant, persistent. Le Caveau also carry their 2016 Riesling.

The first surprise of the tasting was not a wine at all! It was a perry, the Poiré Authentique produced by Éric Bordelet of Normandy. A superb low alcohol drink, full of flavour and refreshment. At the same table, I next enjoyed the Rosso Colfóndo, by Casa Belfi in the Veneto. The Colfóndo is the method, not quite the same as Prosecco, and the grape variety is not the usual Glera but a local variety called Raboso. Lively and lovely with tart red fruits before a sweetish finish. Something for the coming summer!

In the beautiful German town of Deidesheim, Von Winning produce some gorgeous wine including the 2106 Weissburgunder (Pinot Blanc). “This is newish," said Le Caveau’s Colm McCan as we tasted. “They are a long established winery and this is a beautiful wine.” Sure is. I'll be putting that on my shopping list.

Colm was meeting and greeting but was back with me by the time I got to Oregon, to the Ovum winery in particular. Ovum, as you may know, means egg and the egg shape features prominently in the operations here, they use egg-shaped fermentors. Whatever they’re doing, they're getting it right if this Off the Grid Riesling is anything to go by. Ovum are well known from their Big Salt wine which gained them something of a cult following.

Another American to engage the palate was Feints Red by Ruth Lewandowski from Utah. Apparently the grapes are grown in California and the fermentors are later moved to Utah. It is a very engaging blend of Arneis, Dolcetto, Barbera and Nebbiolo, an Italian quartet.

And, speaking of Italy, I found another gem in the Il Pionere, IGP Salento, Natalino Del Prete, new to Le Caveau. But not new to Dario who was with the Kilkenny company on the day and who also worked in this winery. He told me they were pioneers in the organic field. The fruit comes from low-growing bush vines of low density; “Great acidity, textured, no heaviness, between fruit and floral.” The main grape is Negromara and there is a little Malvasia Nera which enhances the aromas. Superb. 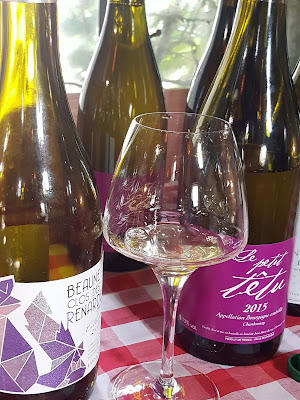 The trend towards lighter, drier and lower alcohol wines was evident in the tasting but room for the odd big hitter too including a quite excellent Saperavi by Georgia’s Ketevan Berishvili, that weighed in with 15.5% abv! Calcarius of Puglia had a series of low alcohol wines. I got to taste three: Hellen Rosso, the Roz and a lovely summery Orange. All good

Also impressed with the Roussette de Savoie (and its unusual Altesse grape); and three from Burgundy, Les Buées by Larue, the Givry “Clos de la Roche” from Parize and the Beaune “clos des Renardes” by Fanny Sabre. Loved too the gentle aromas and palate of the Mauzac Rose by Cazottes in Gaillac, the Bordeaux wines of Té Diem, the Burgundy red by Lacour, and the El Abasto Malbec from Argentina. 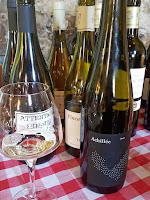 I had been thinking of skipping the Txakoli but I was persuaded to try the Ameztoi 2018. And glad that I did. It is lovely wine, just 10.5%, and the acidity doesn’t show as much as it does normally in this Basque wine. So I’m putting it on my list! 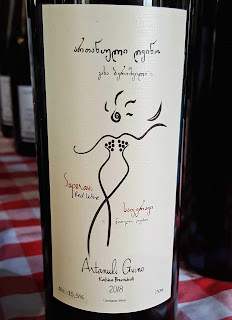 Towards the end, I came across a magnificent Pinot Noir, the Ahurani by Kelley Fox (US). This whole-bunch wine is up there with the best of them. But, if I had worn my overcoat, the one I would have been tempted to smuggle out would have been the Morgon “Le Clos de Lys” by Domaine Chamonard. Don’t think I’d have made it through though as it came in a magnum! And in any event, I noticed that it is very well priced by the bottle. So I’ll be honest and buy!

Well done to all at Le Caveau who managed to get over 100 of their 600 wines up on the shelves in the ancient Apple Market shed in the heart of old Cork. And a big pat on the back too to the Rocketman who supplied some excellent real food for lunch, very enjoyable indeed.
Le Caveau The Rocketman