Hands On Fun during Roe and Co Whiskey Tour in Dublin’s Liberties.

March 12, 2020
Hands On Fun during Roe and Co
Whiskey Tour in Dublin’s Liberties. 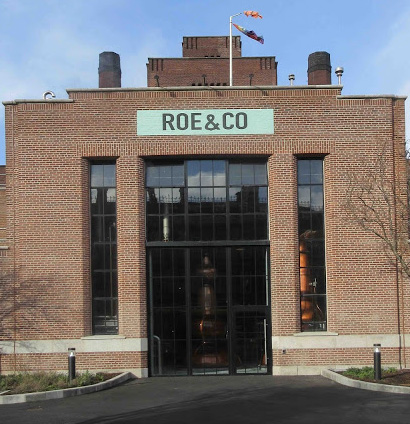 We are sitting in a rather plush room. The lights are dim.There is a covered box on the table in front each of us. Eventually we are invited to flip the lid. In the box are three closed containers, a tube of liquid, a glass of whiskey, and two sections, one with malted barley, the other with corn (maize). 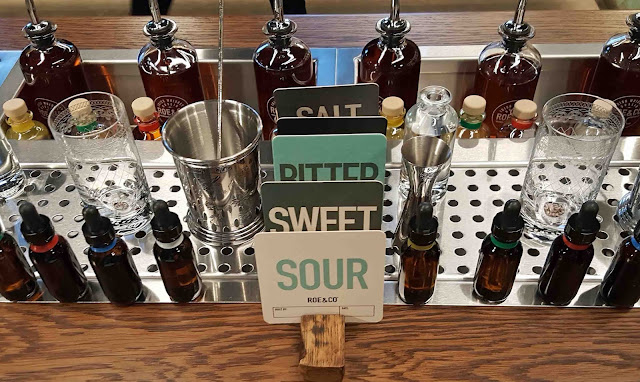 On the word, I squeeze a few drops of whiskey from the tube on to a palm and then rub my hand together, and smell the result. Now we open the three containers and use the old nostrils again. No 1 is sweet; “from the fermentation” says our guide. No 2 looks and smells like caramel and coffee; “from the distillation”. No 3 looks and smells like a piece of clove rock; “spice, from the maturation”. The barley and corn (maize) are there because this whiskey is a blend of malted and grain (aged in Bourbon casks). 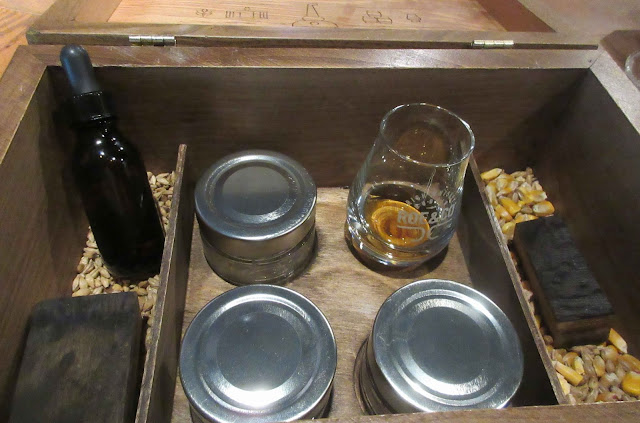 We finish by tasting from the glass in the box. All the elements have now come together in harmony and we enjoy. What is a bit unusual about the new Roe and Co whiskey is that its ABV is 45 degrees, up on the usual forty. 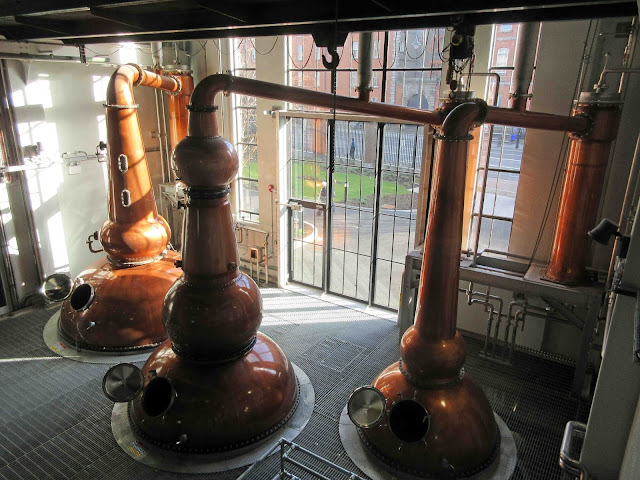 The Roe master blender, Caroline Martin (a Scot), whose original brief was “to create a modern Irish whiskey”, went through over a multiple prototypes before eventually settling on this one. Then, she consulted widely again with the country’s bar staff. And the message that came back was that this higher alcohol mix was just the job for cocktails! So there you are.

You get a fair bit of fun in this new Dublin and, soon afterwards, in a different and well equipped room we each are assembling our own cocktail under the guidance of Shane. Again we did a bit of tasting, this time getting to know, by tasting of course, the five tastes: sour, sweet, bitter, umami and salt. We had all the essentials in front us including the all important jigger (20ml and 40ml) and whiskey of course. Not over impressed with my effort at first. It did seem to improve after a few minutes but by then we were heading downstairs to the bar for another drink, either a whiskey or a another professional made cocktail!

So who is this Roe? George Roe & Co helped build the golden era of Irish whiskey - this area of the Liberties was known as the Golden Triangle -  in the 19th century. Their distillery at Thomas Street in Dublin extended over 17 acres and they were Ireland's largest exporter of whiskey. As neighbours for hundreds of years George Roe & Co and Guinness were the two biggest names at the heart of Dublin’s historic brewing and distilling quarter.

And now it is Guinness (through Diageo) that have opened this Roe distillery on the site of an old powerhouse. Our tour was called the Power House Tour. The original Roe distillery closed in 1926 and now all that remains is the distillery windmill tower (known as St Patrick’s and visible from the tour) and a pear tree that flowers to this day. Indeed, Shane told us the old tree is still fruiting and it and the tower are used as a marketing motif. In addition, a part of the old power house has been retained and you’ll see it on the tour.

For our twenty two euro each, we were promised a personalised experience. There were just five guests - a maximum of 16 is permitted - so we did enjoy the stories plus the sensorial tasting and cocktail workshop exploring the flavour and taste profile and that signature serve in the Power House Bar. Only over 18s are allowed.

You also get to see the distillery itself, mostly from an overhead walkway. It opened last year so the whiskey used in the current offering has been distilled elsewhere on the island. The three stills are named Vision, Virtue and Valour. The middle one, Virtue, has a slightly different configuration to the others and is a gift from sister company Gordon’s Gin. All very impressive and Caroline and her crew here are all looking forward to their first whiskey which should see the light of day in 2022.

If you want to find out more about the various tours, read here.

By the way, the Power House Bar is open to the public on Friday nights when they’ll be dishing out signature Roe & Co cocktails, great tunes and good vibes.