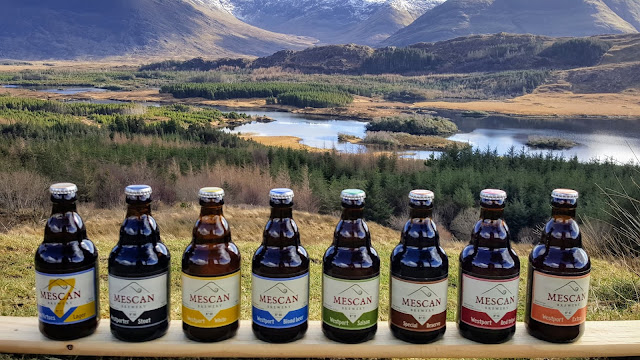 Named after the monk Mescan who was St. Patrick’s friend and personal brewer, Mescan is surely the perfect beer to choose for St. Patrick’s Day. Appropriately, the Belgian-style beer is brewed on the slopes of the holy mountain Croagh Patrick, near Westport in Co. Mayo. The stylised Mescan logo is a simple, creative representation of the mountain and the curved swirl represents the water flowing from the holy mountain which is used to make all the Mescan beers, via a spring well beside the brewery. In medieval Europe it was common for monks to make and drink beer as an aid to sustenance during periods of fasting and prayer. We are sure Mescan's brew would had helped the saint during his Lenten devotions on the mountain.

Founders, owners and brewers are ex-veterinary surgeons Bart Adons and Cillian O’Moráin. Bart hails from Belgium and before launching, the pair spent four years perfecting their original recipes for beers inspired by Bart's homeland. Mescan produce artisan Belgian-style beers brewed in small batches with craft, care and attention to detail. They are matured for months before they reach perfection and are released for sale. The water for Mescan beers comes from deep underneath Croagh Patrick via a spring beside the brewery. Malts, hops and yeast for the beer come from Belgium.

The Mescan core stable of beers is: Mescan Blond, Mescan White, Mescan Red Tripel, Mescan Saison, Mescan Extra, Westporter Stout and Mescan Special Reserve. They also produce a seasonal Christmas Beer ‘Beoir na Nollag’ and Mescan ‘Seven Virtues’ which is a series of one-off brews taking the taster on an eclectic voyage for the palate. Seven Virtues Baltic Porter will be available later in the year.

Mescan Blond beer is the flagship brew. It is a 5.5% golden ale with pear and floral notes and restrained hop bitterness perfectly balancing the malt flavours. Crisp, clean on the palate and flavoursome it is an excellent match for most foods making it the perfect beer to have on hand.

Mescan have produced an innovative Food-Pairing Guide, an easy way to match Mescan craft beers with the foods that complement each beer best. It is available in a printed format and also via the website. A simple click on a QR code brings you to the webpage. The Mescan Food-Pairing Guide was developed by Inge Roels, a Belgian food-pairing expert in who has worked with the brewery since its early days.

Mescan Beers are available through Faherty Wholesale in Connacht and Alpha Beer and Cider Distribution nationwide.


There won’t be any green beer flowing at the Mescan Brewery on St. Patrick’s Day – but there certainly will be beer.
Mescan St Patrick's Day