I am looking at a pair of spoons in a case with a glass cover. Just two spoons, a little bit bigger than tea spoons. They look, in the dim light, as if they are made of plastic, maybe (but more unlikely) of bone.There is a caption alongside. It explains that they were once used by inmates of the gaol, that they were made with horn so that they could not be sharpened and used as weapons or tools in an escape. 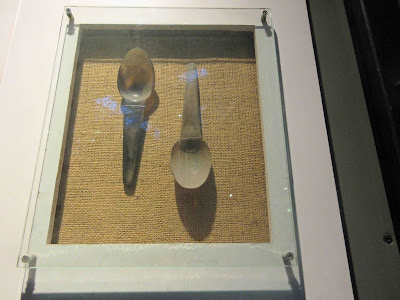 I am in the museum rooms of Kilmainham Gaol (opened in 1796, two years later Henry Joy McCracken became its first political prisoner). There is quite a lot to see here (over 10,000 objects have been donated). Quite a lot to read also. We have just completed the mid-morning prison tour. I must be thinking about lunch because, instead of reading all the details, I find myself selecting items to do with food.

One inmate is quoted: ‘One thing that struck me in Kilmainham was the semi-starved aspect which all the convicted prisoners presented. They seemed to be utterly dejected and weak, and unable to undergo any amount of physical fatigue… I do not think that we are entitled to enfeeble the bodies of prisoners in order to reform their minds.”

The quote is from none other than Charles Stewart Parnell. He was in fact a prisoner here but a first class one. He was treated very well indeed because he was an elected politician.

For many years, the jailers benefitted from the extraction of fees through the sale of food and drink. It was one of the perks of the job. You read much the same about some South American prisons today. By the late 1830s, the arbitrary regime under which the rich prisoner could dine in relative style while his penniless fellow inmate starved in miserable conditions was finally eliminated. Yet, Parnell was imprisoned in 1882 and lived in some style, even able to interact with visitors.

The Great Famine (1845-49) saw an explosion in the prison population. One reason was the introduction of the Vagrancy Act in 1847. Intended to clear the streets of the unsightly poor, its effect was to swamp the prisons with those found begging in the streets. At least in prison you had the “luxury” of a meagre but life-saving prison diet but there was a downside, the chance that you’d succumb to the disease ridden overcrowded conditions.

And then there’s that box of chocolate. In March 1921, a Black and Tan officer presented death row prisoner Thomas Whelan with the treat. In the hours before his execution (14th March 1921), Whelan sent the box to a young girl Alicia Mann (8) with a message that if he were reprieved they could eat them together, if not she could eat them herself. Alicia never opened the box. 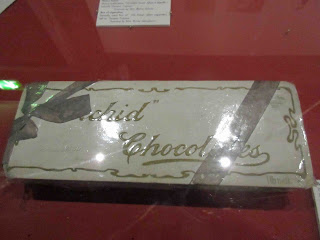 A poignant story indeed. And this is one of the saddest tours. Very popular though and, even in off season, you will need to book. Our guide was Erin and she did a great job taking a bunch of multi-national visitors through the old gaol. Men, women and babies, even young children on their own (5-year old Matthew Rossiter, for example), were imprisoned here for often trivial offences.

It was only in the latter stages of its existence as a functioning prison that Kilmainham began to hold political prisoners in large numbers, those from the rising, from the War of Independence and then from the Civil War. One of the first places you visit is the chapel, the scene of the eleventh-hour wedding of Joseph Plunkett and Grace Gifford in May 1916.  Plunkett was executed just hours later and Grace would be back in a few years as a Civil War prisoner.

The Stonebreakers’ Yard where the leaders of 1916 were shot is visited later. A cross marks the spot where most of them fell. But the already seriously injured James Connolly could not make the walk across the yard and so he was shot by the opposite wall. Tears are never far away here.

The most bitter tears though are reserved for the deaths of the Civil War, inflicted by Irishman on Irishman, not just in Kilmainham (which closed in 1924) but throughout the country. If you visit, make sure you read Peter Cassidy’s final letter to his mother. He and three 19 year olds were the first executions of the Civil War. Many more would follow. 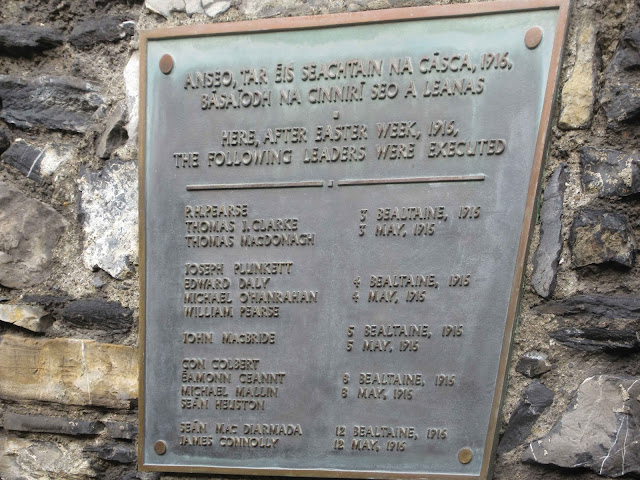 While it may be tough going at times, a visit is highly recommended. There are some light notes too from our excellent guide, including at the end when she tells us with some relish that we are "free to go". Also, did you know that films such as The Italian Job, In the Name of the Father, and Michael Collins, were partly filmed here, also RTÉ’s Rebellion drama series, along with a U2 video?

Just a tip, if you are walking. If you come from Heuston Station, follow the signs for the Irish Museum of Modern Art. Go through the IMMA entrance and courtyard and then walk the avenue through the grounds and, when you exit through the castellated gates, you’ll find the gaol directly across the road. Go back the same way and you’ll find the excellent Kemp Sisters café in the basement of the IMMA where I enjoyed a lovely lunch!

If you are intending to go, even if you are unable to go, then you will benefit hugely from visiting the excellent website here.