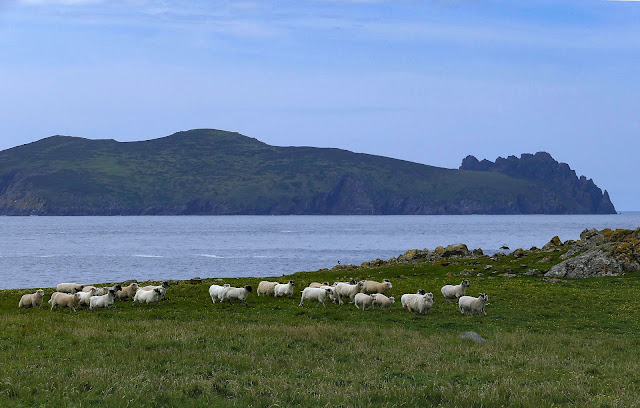 As the tiny flock of lambs arrived safely on shore at Dun Chaoin harbour late September, following a choppy boat ride from Beaginish island, across the Dingle Sound, there was an audible sigh of relief. In 2018 the weather was so bad in Dingle that it was too dangerous even to attempt to get the lambs off the islands, so their safe arrival this year is seen as a blessing.
In the meantime, Cork’s Market Lane Group of restaurants, which includes Market Lane, Elbow Lane, ORSO, Goldie and Castle Café, have been preparing for weeks to celebrate this unique, award-winning Autumn lamb.  Dishes, which have been created to use every part of the animal, will be on menus from mid/end of October until their exclusive supply of this wonderful product has run out.
The habitat on the islands is what makes this product so special. The animals mostly graze on the small island of Beginish, a natural bird sanctuary, which makes the soil incredibly fertile.  There, the animals graze at leisure in a marshy meadow full of heather, grasslands and wild herbs.  They have even been known to nibble on the seaweed which washes up on the natural beaches that provide access to the island.  The grass is salty from sea spray and this gives the lamb its highly valued pre-sale flavour.
As the animals are free to roam uninterrupted, there is no forced ‘fattening’.  This means that the lamb is leaner, ‘creating a near-perfect fat to meat ratio’ says award-winning Dingle Butcher, Jerry Kennedy.  “Fortunately, there is no liver fluke on the islands, so the lamb is not treated for anything other than worms.”
Conrad Howard, head of the Market Lane Group, who has been supporting Blasket Island lamb for many years now says “We are delighted as a group to highlight this very special produce.  The impeccable provenance of this lamb is reflected in its superb quality and flavour. We are also very proud to be the only restaurants to serve it to our customers. Our chefs begin creating their dishes in August in the anticipation and hope that the lamb will arrive.”
Diners can look forward to dishes such as ‘Spicy Lamb Sausage, grated tomato, red onion, parsley pine nuts, mint, and sumac served with flatbread, ‘Slow Roasted Lamb Neck Shawarma with tahini, green peppercorn and pickled squash, ‘Braised lamb breast with black garlic mash, wild mushroom and Tawny cider jus’, and ‘Loin of lamb with pancetta and potato terrine, aubergine puree, winter vegetables and a lamb jus’.
The story begins with smallholder, Donnacha O Ceileachair, who shepherds his small flock of sheep on the Islands.  When the April-born lambs are ready in September, he brings them from the island onto his farm on the mainland.  After a couple of weeks, Kennedy then picks out the premium lambs which are sent for slaughter.  “Timing is very important,” says Kennedy.  “The lambs have been used to the peaceful surrounds of the islands and they can lose weight very quickly when they are distressed.  After selecting out the lamb for the Market Lane Group, the remainder will be sold through his shop in Dingle town to a waiting list of customers.
It is a very dangerous job to get the animals off the islands.  “You have to be pretty fit and healthy,” says O’Ceileachair.  “We will be looking very soon to get the younger generation involved to make sure that this tradition is kept alive and well - so the public can continue to enjoy the unique and delicious taste of this special lamb.”
Updates for the Blasket Island Lamb Celebration at the Market Lane Group of restaurants will be available on its social media channels.
press release
Blasket Lamb Market Lane