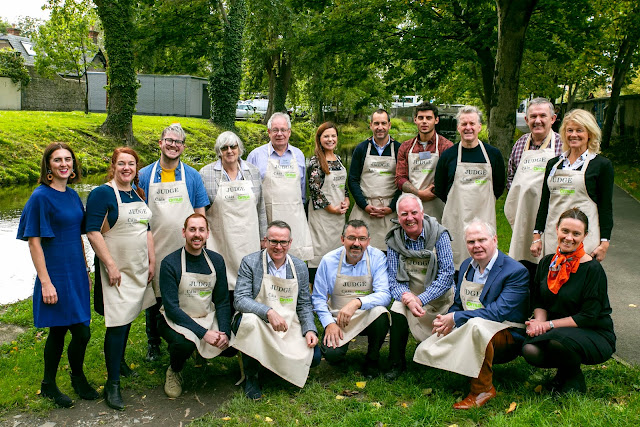 A Question of Taste:
Catherine Fulvio among team of expert judges as the 2019 CÁIS Irish Cheese Awards welcome over 200 entries from 50 Irish farmhouse cheese producers

The biennial Irish Cheese Awards has once again become the talk of the town among the Irish food lovers’ community. With less than one month to go until the prestigious ceremony, it was finally time for the group of expert judges to come together this week (Wednesday 9th October) to select a worthy list of winners and decide upon the best in class for 2019.

Now in its eighth year, the Irish Cheese Awards is organised by CÁIS (Association of Irish Farmhouse Cheesemakers) in association with sponsors Ornua, Pallas Foods and Bord Bia, the latter of whom has supported the initiative since its inception. It is the only competition dedicated entirely to Irish cheese. The event highlights the talents present in this country in the field of cheesemaking, with entries open to both artisan and large-scale cheese producers within the 32 counties on the island of Ireland. The comprehensive judging process took place at Bord Bia’s Dublin headquarters, where famed TV chef Catherine Fulvio was joined by 13 of her fellow judges, including Ross Lewis, Head Chef and co-owner of Chapter One restaurant in Dublin; John McKenna, Editor of McKennas’ Guides; Aoife Carrigy, food, wine and travel writer; Enda Howley of Ornua; and Russell James Alford and Patrick Hanlon of GastroGays.

Following this all-important judging phase, 18 Irish cheeses have now been selected as Gold winners in their relevant categories, with the results to be announced and winners commended during the Irish Cheese Awards ceremony and gala dinner, which will take place on Thursday 7th November at The Metropole Hotel in Cork.

The exclusive event will be attended by judges, competing cheesemakers and members of the public eager to be the first to catch a glimpse of this year’s award winners, while enjoying a gourmet 5-course dining experience in the process. The bespoke menu will showcase a selection of 2017’s winning cheeses, with a range of dishes carefully curated by The Metropole’s Head Chef Stuart Dardis, who has garnered rave reviews from avid food lovers since taking over at the helm of the famous Cork hotel. MC for the evening will be journalist and broadcaster Helen Carroll from RTÉ’s Ear to the Ground.

For the first time in almost 10 years, CÁIS has appealed to the general public to share their valued views, inviting cheese lovers to cast their vote for their favourite Irish farmhouse cheese. Nominations will be accepted until Monday 21st October and members of the public can cast their vote by visiting www.irishcheese.ie/publicvote. The winner of this exciting new category will be presented with their award during the black-tie event next month. A further two new categories have also been brought to the table for 2019, namely ‘Best New Cheesemaker’ (entrants must have entered the market since 2016) and ‘Best Raw Milk Cheese’.

With 20 categories overall, including this year’s addition of the public vote, judges were put through their paces as they endeavored to select the best on the block. Each cheese entered was judged and assessed under three key criteria: flavour and aroma, body and texture and overall appearance of cheese, while packaging and branding was also taken into consideration within the ‘Retailer’ and ‘New Cheesemaker’ categories. While undoubtedly an enjoyable job, the judging process was also a thorough, in-depth exercise, with each judge working hard to ensure the efforts of the country’s finest cheesemakers were accurately highlighted and commended.

Speaking as the competition officially got underway on Wednesday, expert cheese grader and judge Enda Howley of event sponsor Ornua, said: “At Ornua, we work collaboratively with Ireland’s cheesemakers to select and grade the finest cheddar to export all around the world. Ireland’s reputation as a quality food producer is greatly enhanced by our cheddar-making expertise coupled with the quality milk from grass-fed cows, our farmers’ produce. I am honoured to join the esteemed judges for this year’s Irish Cheese Awards, which demonstrates the incredible talent among our cheesemakers in Ireland.”

Also commenting as the 2019 judging process came to an end, chef and judge Ross Lewis said: “Ireland is currently experiencing a wonderful food movement and Farmhouse Cheeses have a strong position within this movement. The Irish Cheese Awards are not only celebrating these cheeses but showcasing the high standard of the Irish cheese sector, especially artisan cheese but also larger cheese companies. I am delighted to be part of the judging panel for the 2019 awards and it was a tough task to choose the best, as most of the cheeses we tasted today deserve recognition. At Chapter One, we have championed Irish produce since the beginning and are delighted to see how Irish food is now recognised beyond our shores.”

Originally formed in 1983, CÁIS has spent more than three decades educating its members in everything from the art of cheesemaking to business development and hygiene. Their promotion of cheese competitions has been a key factor in pushing Irish producers to showcase their work and as a result, increase brand awareness and knowledge and appreciation of local, artisan produce both nationally and internationally. Similarly, the Irish Cheese Awards recognises and highlights the talents present in this country in the field of cheesemaking, offering a prestigious platform to homegrown brands and promoting them among Irish consumers, encouraging shoppers to choose locally made produce.

Tickets for the 2019 Irish Cheese Awards cost €69 per person and can be purchased on Eventbrite or through the website, www.irishcheese.ie/irish-cheese-awards. For more information on CÁIS and the Irish Cheese Awards 2019, visit www.irishcheese.ie. For social media updates, follow CAISIreland on Facebook and @caisireland on Twitter or follow the conversation using #IrishCheeseAwards