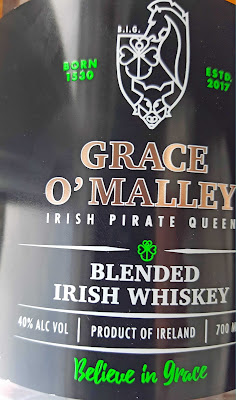 Pirate queen Grace O’Malley has had a recent Irish whiskey named after her, quite a few in fact, all finished by a company set up by Stephen Cope (deeply proud of his West of Ireland heritage) and his partners Stefan Hansen and Hendrick Melle.

They have tied down a large supply of stock from the John Teeling-owned Great Northern Distillery and Paul Caris, cellar master and blender at French company Alteroak, has been recruited to oversee maturation and finishing of the spirits.

“We’re not a distiller and we are not trying to be. That isn’t what we are about. Our whiskey comes from Great Northern and we’re very proud of that as we see them as specialist at what they do,” said Mr Cope, quoted in the Irish Times. The company, Inis Tine Uisce, are head-quartered, appropriately enough, in Westport, where they reportedly intend to open a maturation warehouse in a year or two.

Their whiskey is being sold in three different ranges, beginning with the introductory Grace O'Malley Crew. Move up then to the Navigator Range and next to the Captain’s Range (their finest bottles).

I recently tasted a sample (provided) of their 3-year old Blended Irish Whiskey. The blend, a special blend, combines multiple batches of whiskey of varying age statements from three to ten years old, including, unusually for Ireland, a high content of double-distilled malt.  Each batch of whiskey is aged in different barrel types including French Oak, American Oak, Bourbon and Rum Casks.  These casks are hand selected and matched to each whiskey’s characteristics for maturing and finishing.

So what’s it like? Colour in the glass is not quite as dark as it appears in the squat bottle. Nose is quite intense, quite spicy. On the palate it is light and fruity, spicy too (not as prominent as you might expect from the aromas). Nice harmony between all the various elements (and there are a lot of them), all the way towards a very pleasant finish indeed, smooth and fruity with a slight sweetness.