It’s that time of year again. The Market Lane’s precious quota of delicious Blasket Lamb has arrived in Cork and the chefs at ORSO, Elbow Lane, Castle Café and the parent restaurant itself are trying to outdo each other with tasty expressions. Every bit of the lamb will be used and there’ll be quite a variety of offerings to choose from.

When I got the call to try out the dishes at Elbow Lane, there was no hesitation. We got in early on Friday evening last and enjoyed two fabulous courses from their famous grill and some of their own superb beers as well.

Not too many restaurants use kidneys nowadays, maybe the customers are reluctant. But we had no hesitation when our fantastic server detailed this starter dish for us: Blasket Lamb Kidneys, with Quince, Rhubarb and Kombucha glaze and sautéed Chard.

Quite a hat trick on the plate. The glaze was unreal, the green Chard provided an extra texture (and flavour of course) and the interaction with the kidneys rounded the potentially robust and rustic dish into a very sophisticated mouthful indeed. Quite a few mouthfuls actually!

The sauce in the next dish, a preserved lemon and marjoram beurre blanc, was another standout. You could have either Lamb Leg (no bone) or Lamb Chops. Both had the same sauce and also a crunchily delicious caper roast cauliflower.

So one of us  had the Chops, the other the Leg, and there was a bit of swapping going on. If it had been a contest, I think I’d have given the chops, with their amazing fat enhanced flavour (or was it the Angel Lane stout factor), the edge. Must admit I know little about the grill here but it sure delivers fantastic flavours.

Elbow Lane Smokehouse and Brewery, as you may know, is not the biggest, but the crew here make the very best of it, whether it’s the chef is his very confined quarter or the front of house people explaining the various dishes, helped diners make their own choices, in the narrow dimly-lit space,  and it all runs very smoothly indeed. Quite an enjoyable customer experience and highly recommended, especially for couples and foursomes. 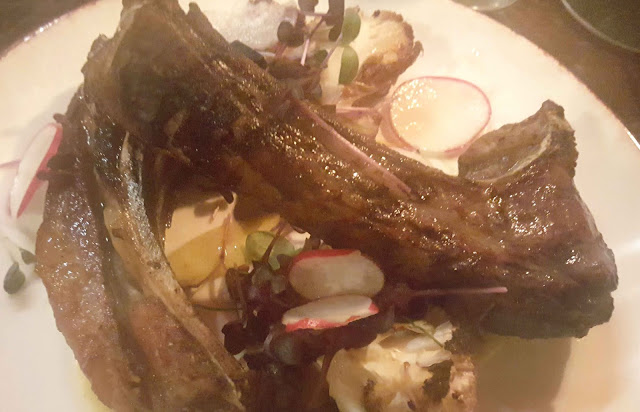 Just a bit of background on the Blasket Lamb….

The habitat on the islands is what makes this product so special. The animals mostly graze on the small island of Beginish, a natural bird sanctuary, which makes the soil incredibly fertile.  There, the animals graze at leisure in a marshy meadow full of heather, grasslands and wild herbs.  They have even been known to nibble on the seaweed which washes up on the natural beaches that provide access to the island.  The grass is salty from sea spray and this gives the lamb its highly valued flavour.
As the animals are free to roam uninterrupted, there is no forced ‘fattening’.  This means that the lamb is leaner, ‘creating a near-perfect fat to meat ratio’ says award-winning Dingle Butcher, Jerry Kennedy.  “Fortunately, there is no liver fluke on the islands, so the lamb is not treated for anything other than worms.”

Conrad Howard, head of the Market Lane Group, who has been supporting Blasket Island lamb for many years now says “We are delighted as a group to highlight this very special produce.  The impeccable provenance of this lamb is reflected in its superb quality and flavour. We are also very proud to be the only restaurants to serve it to our customers. Our chefs begin creating their dishes in August in the anticipation and hope that the lamb will arrive.”
Blasket Lamb Castle Café Elbow Lane Market Lane ORSO