There is a white tigín in Kinsale. It is the home of St Francis Provisions, a café com deli that is causing something of a stir in the town and beyond.

Hardly because of its size - it would be hard to squeeze twenty diners in here. Not because of its furniture: three basic 2-person tables and perhaps ten basic high stools. Not because of the ware, lots of odd plates here, some the worse for wear! So, why the fuss? It’s the food, stupid! 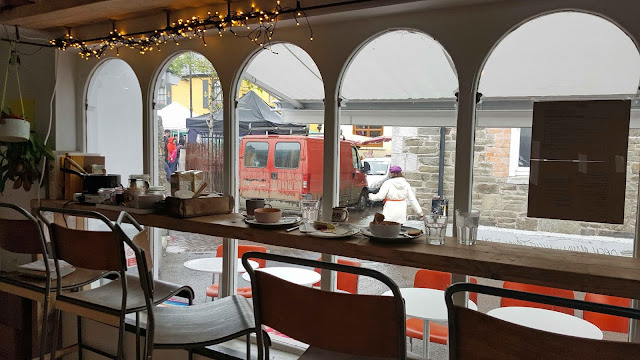 Take this glorious salad in the top photograph. “Perhaps the best salad ever,” according to first time customer CL who paid €9.50 for this colourful flavourful plate that is also seasonal and local. The tasty bounty of the season is deliciously expressed in the ever so pleasing melange of mixed leaves, fig, spelt, nuts and seeds, roasted parsnips, pumpkin and sweet potato, soft creamy cheese.

I’m also a St Francis novice and ordered one of the two daily sandwiches: Gubbeen pistachio salami, Gubbeen cheese, fig and ginger chutney on focaccia, served on their own focaccia. On advice from the kitchen - there are certain advantages in sitting at the counter - I had this toasted and this too was excellent, local produce expertly handled.

By the way, the day we visited (Oct 9th) was the day that they finally became truly their own bakery with chef Darren Kennedy and baker Sarah Walsh adding the sourdough to their repertoire. The bar has been well and truly raised here and it’s a pleasure to see such a young enterprise (it opened at the start of the summer) progress so impressively under the direction of owner/manager Barbara Nealon, a woman from the Banner who arrived in Kinsale via San Francisco (hence the tigín’s name).

And the output of the ovens is spread across the counters, lots of tempting pastries, both big and small. My pick was the Sticky Orange Cake, sweet, moist and delicious, enhanced no end by a cup of the excellent Red Strand coffee. 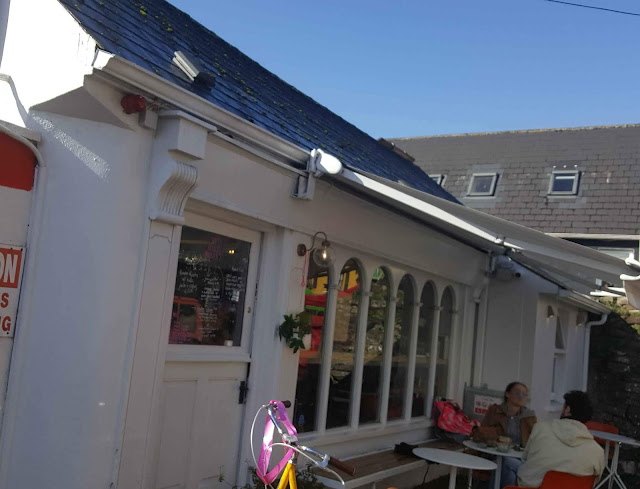 Rock and roll was playing on the record player - it is all vinyl here boy - with a voice from my past knocking out “Here comes my baby. Here she comes now…” as we settled up, €27.00 in all, before stepping out in the sunlit Farmers Market (a mega shower had just finished).

It is not just lunch that they serve here. Breakfast is available from 8.45, brunch is well worth checking out on Saturdays and Sundays, and there’s a dinner service (with some superb wines) available every Friday and Saturday from 5.00pm. They are closed Mondays and Tuesdays.