Taste of the Week 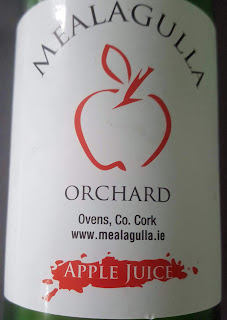 I was probably not fully awake the other morning as I reached for the juice glass*. A few sips later and I began to realise what a beautiful liquid it is, this apple juice from the Mealagulla Orchard in Ovens. A very pleasant wake-up call for the palate indeed and our Taste of the Week.

The fruit is hand-picked, farm pressed, blended, pasteurised and freshly bottled to produce a refreshing natural drink. This is a natural product so the taste may vary during the season as the maturity of the fruit varies. Serve it chilled. It may also be used as a mixer - thinking of trying a few drops in my next Longueville House Apple Brandy!

The blend is 50% Bramley and 50% Golden Delicious and the result is superb, a great balance between flavour and acidity. Ingredients are apple juice, Vitamin C (as antioxidant). There is no added sugar. Refrigerate once opened.