Masi (Italy) and Louis Jadot (France) were among the winemakers featured as Findlaters brought their all star combo, the Wineberries, to Cork’s Montenotte Hotel last week. Quite a line-up with Bollinger, Hugel, M. Chapoutier, Louis Jadot, Masi and Torres all showing their excellent wines.

Started off with a glass of Bolly and then got a chance to take in the views over the city, including the impressively refurbished hotel’s newly laid out gardens. It was quiet - I was early - so I had a good chance to walk around and savour what was coming.

Masi are “one of the great entrepreneurs of Italian wine,” according to The Modern History of Italian Wine and they were ably represented in the Montenotte by Export Manager Giacomo Boscaini.

Masi are well known for using techniques that enhance the flavour and concentration of their wines but I was somewhat surprised when he mentioned the technique in conjunction with the white he was pouring, the Massianco. It is a blend of 85% Pinot Grigio and 15% Verduzzo from Friuli. The Verduzzo spends three weeks drying and this enables it play quite a part in the final result (the fruits are vinified separately). This 2017 carries the DOC de Venezia.

They are proud of their techniques, experts in “enhancing aromas and tastes using lightly semi dried grapes”. This appassimento leads to a higher concentration of fruit and it seems to work well here.

There are excellent white fruit and blossom aromas and the colour is light gold with a green hue. This is Pinot Grigio plus, with character and concentration, a lip drying acidity and an impressive finalé. Well worth a try.

Just as I was going to another table, Giacomo asked me to try their Canevel Brut Prosecco Superiore DOCG. I’m so glad he did. I can take or leave Prosecco but will forever regard it in a different light after tasting this beauty, proudly sporting its DOCG, the fruit from the prime area of Valdobbiadene. A benchmark in the Canevel range, a dry and silky sparkling wine with delicate aromas of apples and spices. More than enough to convert me!

Skipped on down to Tuscany then for the first of the Masi reds. It was the Poderi Bellovile Rosso di Toscana (IGT) 2015. “Fresh, fruity, an everyday wine with lots of Tuscan character.” Would do nicely at the weekends too!

It is made from a blend of Sangiovese, Canaiolo and Ciliegiolo grapes grown in the Cinigiano hills on the Poderi del Bello Ovile estate. Masi's purchase of this estate in collaboration with Conti Serego Alighieri marks the return of the descendants of the poet Dante to Tuscany.

Off to Argentina now with Giacomo to try the Passo Doble Valle de Uco 2016, a red wine with an unusually high aromatic content made on the organically run Masi Tupungato estate at Mendoza. The fruit is grown on sandy soil at a height of 1000 metres.

It is striking for its intense fruitiness and delicate spiciness and lovely finish. Its strong and exuberant character comes from the local Malbec grape, while the addition of lightly dried Corvina Veronese (that technique again!) gives it the easy appeal and attractiveness of Venetian wines.

It is also the subject of a double fermentation. At the end of the first (after a month), the dried Corvina is added to start the second fermentation.

And Giacomo still had one big treat for me, the Riserva di Costasera Amarone della Valpolicella Classico DOCG. Proud, majestic, complex and exuberant: this is a special cru version of Masi's gentle giant, Costasera.

And here Masi's unrivalled expertise in the Appassimento technique is used to give the grapes a long period of further ripening on bamboo racks and then there’s an ageing period for the wine of at least three years in casks made from the finest wood types.

The expert use of indigenous grapes for the Valpolicella Classica area - Corvina, Rondinella and Molinara - is enriched by the addition of the unique Oseleta. Needless to say, this was superb!

The Oseleta is interesting as it had been forgotten until re-discovered by Giacomo’s uncle and “now we are using it”. Just goes to show that while companies are important, it is the contributions of individuals that can make all the difference. Saluti!

Nicolas was in great form at the Louis Jadot stand. We had a Louis Jadot dinner with Marie-Pierre Dardouillet (left), Export Director of the company, in Inchydoney Lodge not too long ago and you may read about the wines here.

Interestingly, Nicolas told me they had their own cooperage, Cadus, that they bought in 1996. Our first wine though, the Chablis 2017, is unoaked, deliciously fresh with a beautiful mouthfeel. Next up was the Chablis Grand Cru Les Clos 2016. After a soft pressing, part of the juice is fermented in "double barrels" of 406 litres. The other part is vinified and aged in stainless steel vats. Ageing usually lasts 13 to 15 months on fine lees before bottling. This is more intense, with more volume than the previous one, with good acidity and a really long finish. “Will last for years,’ said Nicolas. 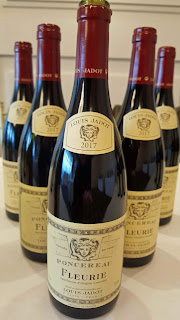 Jadot make wines in Burgundy and also in neighbouring Beaujolais and when I came back to the reds, Nicolas offered the Fleurie 2017. Fleurie is one of the ten crus in the region and straightaway you notice its bright light red colour. “It is one hundred per cent Gamay. Red fruits, acidity, some tannins, well balanced.” A lovely drop as we might say around here.

In 1996, Louis Jadot bought Chateau de Jacques in Morgon, “a really old winery” who also have holdings in other crus here. Morgon is one of the main crus and this 2014 bottle had the added distinction of coming from the highly regarded Cotes de Py with its “granitic volcanic soil”. It was a cold year, natural yeast was used here and the wine spent 12-15 months in oak. Because of the cold, it took a while to open out “but now it’s getting better and better”.

Torres and Hugel were also well represented here and you may read about my chats with them here.
Findlaters Maison Louis Jadot Masi Montenotte Hotel Wine