Torres and Hugel Impress as Findlaters All-Stars Come to Town


Torres and Hugel Impress as Findlaters All-Stars Come to Town
Part One: Hugel, Torres, and Chapoutier 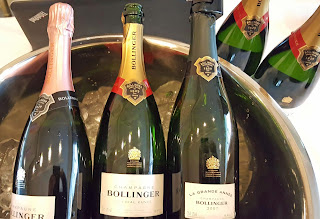 Torres and Hugel were among the winemakers featured as Findlaters brought their all star combo, the Wineberries, to Cork’s Montenotte Hotel last week. Quite a line-up with Bollinger, Hugel, M. Chapoutier, Louis Jadot, Masi and Torres all showing their excellent wines.

Started off with a glass of Bolly and then got a chance to take in the views over the city, including the impressively refurbished hotel’s newly laid out gardens. It was quiet - I was early - so I had a good chance to walk around and savour what was coming.


Hugel
I met a proper star at the Famille Hugel stand where I was greeted by none other than Jean Frédéric Hugel himself and a taste of their outstanding Gentil. Gentil is an Alsace tradition, made from all the white grapes of the estate. And it is done carefully, to a very high and controlled standard.

I’ve been very partial to it for quite a few years now (the Hugel one is on sale in Bradley’s). Jean Frédéric told me it is their best seller. “It is produced from six different grapes. These are blended after the wine-making stage to balance it better. It is super versatile and works well by the glass in restaurants.” I thought that was interesting as I cannot recall seeing it offered around this area. Maybe there’s an opening there - it is delicious and, as Jean Frédéric said, super versatile.

Many shrug when climate change is mentioned but those closest to the ground - the farmers - know it is happening. Jean Frédéric referred to it as he offered me their 2009 Pinot Noir, “their simplest Pinot but from a great vintage, stellar”. Especially because of climate change, the quality of Pinot Noir in the northern regions, including Alsace of course, is incomparable to what it was twenty years ago.” Burgundy beware seems to be the message.

Back in the old days, Alsace was known for its sweet wines and, like Germany (after Liebfraumilch), it took it a while to regain the respect for its wine. “But we have learned from those mistakes and are now back on track as a region”. I think that has been the case for quite a while now.

This was well illustrated with a couple of excellent Rieslings, beginning with the 2016, “a textbook Riesling, very dry”.  The 2015 was very dry again, “even a little flinty, a little bit smoky.. just a little bit of age now but this will evolve well”.

I then spotted the unmanned  Chapoutier stand nearby and helped myself to the sip of the white: Cotes du Rhone Belleruche 2017, quite aromatic, good acidity and with a long finish. The whites here are often under-appreciated. The winemaker’s motto by the way is “Enjoy. Don’t over-analyse.”

Chapoutier’s winery and negociant business is situated in the Rhone area (with vineyards further afield, including Australia). “Our own vineyards and the single vineyards that we select from are cultivated either organically or biodynamically.”  He is of course famous for his reds and had the Cotes de Rhone Collection Bio on show here. I previously did a little feature on him and you may read it here.

Torres is a big company but it is still a family company. And concerned about the climate. Just like Hugel, they see what is happening to the earth.

Less than four years ago, Miguel Torres, one of the family’s fifth generation, spoke in Dublin saying the threats from climate change are been seen “more and more”. “Vineyards are very much at risk. Hailstorms are an example.” And they are doing something about it as you may read here in my article “Message in a bottle”.

Lucas, whose parents are from Argentina, managed the Torres stand in the Montenotte and told me he had three different wines from different regions (plus one from Chile where the family is credited with reviving and transforming the industry).

Torres are based in Penedes (near Barcelona) in the north east of Spain but our first wine was from the other side, an Albarino by Bruxas from Rias Baixas. No oak is used and it spends just six hours on lees. Very light, citrusy and refreshing with great acidity. “Very good with all seafood and goats cheese,” Lucas advised.

Torres seek out higher vineyards (climate change again a factor) and the grapes for the next wine, the Altos Ibericos, are grown between 400 and 700 metres above sea level in Rioja Alvesa. The altitude helps the grapes retain acidity. 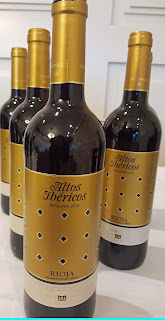 Sixteen months in French oak and two years in bottle qualifies this 2012 as Reserva. It is elegant, very smooth, with softer tannins. “As it ages, the tannins will soften more, the flavours will become more like dried fruit and the colour will fade a bit.” Good now and good in the future! Oh, by the way, it is one hundred per cent Tempranillo.

And another high vineyard featured in the story of our next wine, the Celeste Criaza 2016 from Ribera del Duero. The fruit is grown in the western part of the region at a height of 900 metres above sea level. It is more or less a continental climate and the diurnal range “is good, with cool nights”. And in cooler areas, the Tempranillo grape develops a thicker skin to help protect its valuable properties. Lucas described it as a fruit bomb but it is quite a rounded one, very drinkable indeed. Crianza means it has spent 12 months in French and US oak and 12 months on bottle before release.

So now to Chile and the old vines Manso de Velasco (grown close to the ocean), a superb Cabernet Sauvignon from 2013. It has spent 18 months in French oak, small barrels. It was a warm year and the abv is 13.5%. “Fruit flavours are of blackberries and cherries. Drink now,” Lucas says, “but it will last”. One to watch out for!