Barnabrow and Chef Bowes Rise to the Occasion. Again!


Barnabrow and Chef Bowes Rise to the Occasion. Again!

The Gourmet Evening at Barnabrow House is becoming quite an occasion in East Cork and once again Geraldine Kidd’s charming venue and the skills of Chef Stuart Bowes combined to give us an evening to remember.

Donie O’Brien of ENO had a selection of wines to be proud of and very enjoyable they were. And the occasion was further enhanced by music from the violin duo of Áine O’Halloran and Teresa Foley (known as Violini).

We began with a Cava and Canapé reception. As the glasses sparkled and the music played, there was time for a chat before entering the dining room proper. Quite a few of you will know this room as it is here they hold their well-known wedding meals. With its pointed gothic windows and high vaulted ceiling, it has a church like interior though the seating is more comfortable!

More organic Cava at the table as the amazing Bouillabaisse was served. We had to do a bit ourselves as the Hegarty’s cheese came in little shreds on a side plate. Just added those to the soup and the magic happened as they complemented one another superbly, not to mention that rouille and the chefs top notch sourdough.

The Ballotine was just superb, again that match with the fig and the cinnamon spiced bread so really spot on. And the young slightly oaked Rioja was an easy drinking accompaniment. That high standard continued through the remaining courses. And again it was often the “little things” that enhanced the dish, like the Golden Raisin and Wild Garlic cream with the superb Duck Breast, even the tasty base on which the petit fours were served. 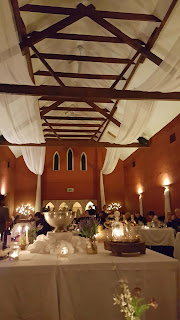 Stuart Bowes had flagged that duck in his wee speech to the guests, proud to use produce such as Caherbeg and Skeaghanore, insisting on the importance of “local” and “using what’s on your doorstep”. “We are excited to do this, this quiet time of the year.”

Geraldine Kidd, now in her 23rd year here, is obviously proud of Stuart’s contribution over the past seven years and has battled to hold on to him against quite a few “poachers”! She was thrilled that word of these occasional gourmet evenings has spread beyond the Cork borders as she welcomed guests from Dublin and Clare.

Donie O’Brien and his ENO wines are regulars here and he was very proud of the organic Cava by Pares Balta that we started with. He loves Baron de Ley too, the producer of the Rioja. “They don’t buy in grapes, use all their own, a guarantee of quality”.

I must say that the Pouilly Fumé was gorgeous. Richly flavoured with tropical fruit and with a “concentrated minerality”. This was followed by another beauty, the Ribera del Duero, another organic wine. “It is 100% Tempranillo, 8 months in new oak, vanilla..aromatic, clean and fresh and will be great with the duck!” And so it was.

Violini stayed with us for the evening. They are classically trained and stylistically versatile. “We play movie soundtracks, pop and rock songs, big band jazz, latin, blues, and the best loved Classical music.”  If you want music for events in hotels, manors, castles, concert halls, or for special occasions big and small, contact them out at violinicork.ie@gmail.com, also at 087 779 5031.

If you missed out on the Gourmet Evening, you can still try Stuart’s cooking and the marvellous produce (both from his producers and the Barnabrow walled garden) during Sunday lunch at Barnabrow. See the menu here.