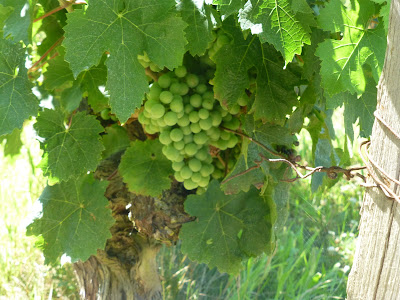 The maturation had not been uniform. The June flowering — the floraison — which had filled the air with that sweet, familiar aroma that ever since he was a child he had likened to the scent of honey, had occurred unevenly throughout the vineyard. The fruit on some vines was further along than the fruit on some other vines. Were the least mature grapes mature enough?
Interestingly, in his vineyard journal, the Grand Monsieur made no mention of the evil that had occurred in his prize vineyard.

from Shadows in the Vineyard by Maximillian Potter (2014). Highly Recommended. (Very Highly, if you have an interest in wine!)