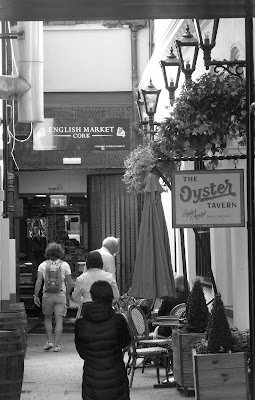 I look at some of the old black and white pics in the new Oyster Tavern and am transported back to my days in Winkle-pickers (shoes), Slim Jim (tie) and DA (hair). But that “good old days” reverie soon evaporated as the delicious dishes arrived on the table. Some terrific food here now, well cooked, and well served by one of the friendliest front-of-house teams around.

The history of a tavern on the site dates to 1800. The new two-storey building owes it current existence to the Capitol development. It is comfortable - there’s even a lift - and beautifully decorated.

The food menu, from breakfast to dinner, is based mainly on ingredients from the adjacent English Market, and the drinks menu, again illustrated with some of those old black and whites, contains a good deal of Irish craft beer and local spirits. Our opening drinks were a mix: a Chieftain Ale from Franciscan Well and a Hemingway Daiquiri.


We were in for dinner and studied the menu, all on one large card. They happily fill you in on the specials and help with any questions. For starters, we could have had Scampi, Chowder, Soup of the Day. And oysters, of course.

My pick though was Tim’s Ham Hock (€6.00), served with Hassett's sourdough bread and West Cork Relish. The ham was packed into a jar. There was a lot of it there and it packed a lot of flavour as well. And that West Cork relish was a tasty bonus, really good.

Meanwhile, CL was thoroughly enjoying her Caprese Salad (7.50): Toonsbridge Mozzarella, tomatoes, basil and olive oil. This has become a local standard and was top notch.


Quite a decent wine list here too and I ordered a glass of Finca Florencia Malbec (8.00) to go with my steak. This was my second Tom Durcan steak in quick succession and again it was very impressive, tender and with outstanding flavour. The 8 ounce fillet (29.00) was cooked to order, and came with straight cut chips, English Market seasonal vegetables, Roast Shallots in a red wine peppercorn sauce. The included veg by the way, mangetout, broccoli and cauliflower, were also cooked to pin-point perfection, which is not always the case.

CL choose the fish special, a Prawn and Mussel Hot Pot with chorizo (18.00). No shortage of flavour there and a warming dish you might well see more of as the autumn comes in. Other main course choices included Tim O’Sullivan’s Black Pudding Burger, Oyster Haven Mussels, Chicken Inn’s Supreme of Chicken, Warm Chicken and Bacon Salad, and a Risotto. There was also a lamb burger special.
After all that, we thought it best to share a dessert from the short yet tempting list. Sherry Trifle was probably top of the list when the old Oyster was in its heyday and that was our pick and we enjoyed sharing the Sherry soaked sponge, raspberry jam, custard topped with Chantilly cream and served with a shortbread biscuit. All for a fiver. You might well have paid close to that back in the day!

The main restaurant area is upstairs though they do serve lunch in the downstairs bar. We had started early and weren't around to see the transformation that takes place later in the night. Then the plates are cleared away, and we were told there is a generational change as well, as the live music - you might even see a saxophonist on the counter - takes over. Oh, those awful Rock and Rollers! (Note to myself: Must try that sometime).
Cork English Market Franciscan Well Hassett's Bakery Oyster Tavern The Chicken Inn Tom Durcan Toonsbridge