Dario Poddana (Les Caves de Pyrene), Francesco Maule (La Biancara, Gambellara) and Pascal Rossignol (Le Caveau) combined to give us a fascinating insight into organic and natural wines, in particular the wines of the Veneto, at Ely Wine Bar last Tuesday. Francesco is a winemaker at the family vineyard in Gambellara and the other vineyard whose wines came under the spotlight was Azienda Filippo Filippi (Soave).

Some in the audience (trade and press) wanted to know how this type of wine was going down with the customers. Dario, Italian wine buyer with Les Caves, stressed there were no added sulphites and the focus is “on wines of intensity rather than of richness”. On their being cloudy, he said it was no problem to the customers.

Pascal added that this type of wine seems to have found a natural ally in the chefs that forage and said these restaurants “react well to it”.

It emerged too that, while mistakes may have been made in the past, maybe concentrating on the vineyard rather than the winery, the objective now is on making good wines that are “clean”.

Dario praised the Maule family and said they were at the forefront of the natural wine movement and not just in Italy. “It is interesting to see how classic ways are being rediscovered, a mix of extreme tradition and extreme modernism."

Prosecco may be very known as being from the Veneto but Dario emphasised that “it is just one type of expression of the area”. The one we started with, the Casa Belfi, Prosecco Colfondo DOC, has a tiny refreshing fizz, a rich texture from the yeasts and a hint of salt (the vineyard is juts 30km from the sea), all combining to say a very pleasant Ciao.

Francesco was quite proud of his very young La Biancara di Angiolino Maule, ‘Garg’n’Go, Veneto Frizzante IGT, “the only one with biodynamic certification”, and rightly so! 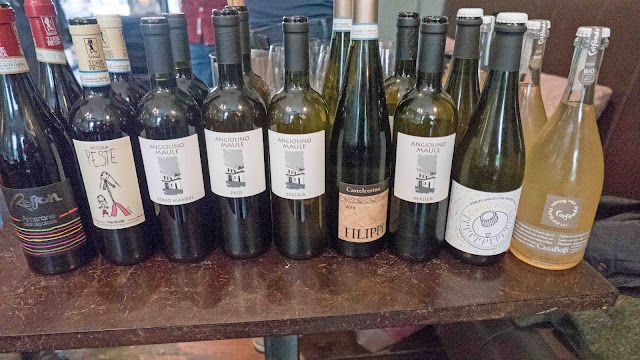 We were tasting in flights of two and next up was the Filippi Soave Castelcerino 2014, a wine I am happily familiar with, “an incredible wine from a very difficult vintage” according to Pascal. Dario:”It is their normal Soave from a well respected hill for wine. They like long contact with the fine lees, rarely less than 18 months, this to confer richness and structure. Very simple wine-making in general.” Looks like it works.

Francesco too praised it “as a very good result from 2014", before moving on to tell us about his Maule Masieiri Bianco 2015, a blend of 10% Trebbiano and 90% Garganego. Lees too come into play here, the period of six months adds “a  nice richness”. “No filters, no clarifying.” A lovely wine, displaying a generosity of fruit and character.

Francesco went on to introduce us to two of his whites. Both the Sassaia and the Pico Bianco were excellent. Again both had some skin contact and had a rich colour but Francesco came straight out and said that he doesn't love the term “orange”wine. “There are red and white wines and a little rosé, maybe!”

And, in general, he stressed the importance of having a “very good quality grape”, otherwise there is the risk of extracting “bad things”. “In the glass I want to feel the grape and the soil.”

One of my favourite wines of the past few months has been the Terra di Pietra, Valpolicella “Piccola Peste” and the 2015, introduced by Dario, was next. “Valpolicella is quite diverse and this comes from the land of rocks, a relatively new estate that produces good vintage after good vintage. They make simple easy-drinking reds, the spirit of Valpolicella. The classic varieties, made simply.”

Someone in the audience noted the outstanding purity and Dario was quick to point out that “you lose that purity if you go down the concentration trail” and added that Terra di Pietra “are moving in a beautiful direction”.

Francesco’s turn now to show us their “basic red” the Masieiri 2016 (IGT), a blend of Merlot (50%), Grenache (40) and Cabernet sauvignon (10). “It is quite young, the tannins a little aggressive and is not filtered.” I rather enjoyed its fresh fruitiness and hints of spice, the tannins not a problem at all.

Back to Terra di Pietra for the Amarone della Valpolicella “Rosson” 2010, a beautifully coloured wine with excellent acidity. Dario told us it had been made in a quite traditional way, just enough richness and concentration, the final result helped by the addition of some Teroldego (known for its light fresh fruitiness). The fact that it came from a very good vintage also helped! Quite a finalé to an enjoyable and informative afternoon in Ely Place.