Oysters Galore on the Cork Gourmet Trail
How many did you eat? 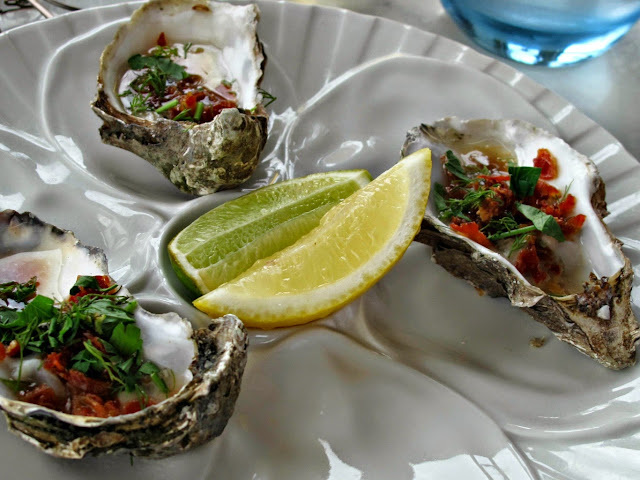 “I had nineteen oysters last night,” claimed a London visitor to the weekend’s Cork Oyster Festival. And that “last night” was just the official launch. I’m still wondering how many she managed during the Gourmet Trail on the following day.

The trail visited five venues and some had up to three restaurants combining. There were so many opportunities to indulge in the delicious crustaceans she must surely have doubled the tally from the previous night!

And there were even more plates of the tasty oysters available at the after party as the various groups found their way back to the ballroom at the Metropole Hotel, the Festival’s headquarters. Oysters, more drinks and music. Well done to instigator/organiser Sandra Murphy and her crew.

Sandra was with our group on the trail and our be-hatted leaders were Kylie from the International Hotel and James from the Imperial. We were last to leave but our intrepid guides had us back good and early to join the after party.

Lord Mayor Tony Fitzgerald had opened the festival on Friday night and the oyster event added to the terrific buzz around town as Culture Night drew the crowds. Guests at the launch were treated to oysters (included cooked versions) by Haven Shellfish and there was also some tempting sushi available with bubbles and wine and, of course, Murphy’s Stout from the sponsors.

On Saturday at noon, the ballroom was full but, after a Kinsale Gin and Tonic, we were divided into groups, met our leaders and headed off on the trail. More gin, part of a cocktail in a cup, at our first stop, the stunning Cask, just across the road. Lots of tasty bites here too and time also to begin to get to know our fellow trailers.

Next stop was the Oyster Tavern, another lovely venue where I enjoyed an excellent meal recently. The oysters here were provided by the Electric Fish Bar, great spot to visit. The Oyster Tavern themselves came up with delicious sliders and bowls of chips.

Amicus were also feeding us with Tom Durcan beef, including carpaccio and teriyaki versions, and more, though their seasonal desserts, Kitchen Garden Rhubarb Fool and the Foraged Blackberry Fool, were irresistible.

Down the stairs then and out into the lane for another group photo before winding up Patrick St and visiting the Bodega where Rachel’s and Cornstore were also lining up with their offerings. The Bodega sushi (one pickled vegetable, another was smoked salmon) went down a treat.

Mike Ryan of the Cornstore - terrific dinner there recently - was the oyster “supplier” and he had a welcome variation called Angels on Horseback (the dish is typically prepared by rolling shucked oysters in bacon and baking them in an oven).

That was excellent though I noticed quite few voicing a preference for the battered prawn version! Rachel’s had a couple (at least) of show stoppers, including a shot of Tomato Water and a shot glass packed full of lobster.

So back to the Imperial Hotel (for the second time in a  couple of days) and they had help from Jacques and Arthur Mayne’s.

Loved that Medjool Date from Jacques plus the superb desserts by the hotel itself. The savoury bites by Arthur Mayne’s (Avocado mousse with prawn, Caprese Bites, and the Chorizo and Chickpea Ragu) were outstanding.

One more stop and soon we were enjoying Margherita time at the newly opened Tequila Jacks. The drinks were eagerly awaited and easily downed. Food too, of course, hot stuff by our hosts and some cooler bits from Olivo, the Italian restaurant at the Cork Airport Hotel.

Tacos Mechados, Roasted Chicken taquitos and Shrimp Rellanos were among the Jacks offerings while the cool bites from Olivo included a lovely mini Caprese and also a Parma wrapped asparagus.

More food anyone? No! A second round of Margaritas was coming to its conclusion and, suitably fortified,  it was time to brave the rain and the wind that had arrived midway though the trail and traipse back to the Metropole.

And if you did wanted to increase you oyster headcount, there were trayfuls of opportunity to do. I did see the visiting London couple but didn't get a chance to check her final oyster tally!

The Prosecco and wine flowed (enjoyed a Rioja blanco, well maybe two!), and then a final chat or two before saying goodbye and heading to the taxi.

Once again, well done to Sandra and the crew and here’s to seeing you all and more in 2018!