Imperial Bond With Taittinger. Champagne Flights on the Mall


Champagne Flights on the Mall


The bond between Cork’s venerable Imperial Hotel, over 200 years old, and the long established Champagne house of Taittinger was further enhanced with a special event in Seventy Six, the classy bar of the South Mall hotel, last Wednesday. Kevin McKee, UK Director Taittinger Family, took us through three of their Champagnes: Brut Reserve NV, Brut Prestige Rosé NV and the Nocturne Sec NV.

And speaking of bond, Kevin told how James Bond figured in the Taittinger story. The now famous champagne house had only begun to come to prominence in the mid 1930s. So it was something of a surprise for the family to read James Bond ordering Taittinger, which he called “the best in the world” in Casino Royale, Ian Fleming’s first Bond book (1953). The compliment was unsolicited.

Frits Potgieter, the Imperial’s General Manager, is determined to have even more champagne in the South Mall. “This is the first time ever in Cork for the Taittinger family. And it’s great for us that they’ve sent Kevin here. We have a great relationship with Taittinger and this is a great informal way to introduce the various styles of champagne.” 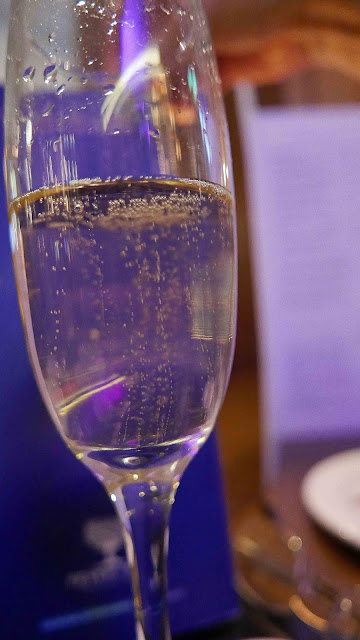 And Frits also told me that after this first informal tasting, the hotel will offer tasting flights that will allow their customers try out and enjoy champagne. So do watch out for those.

Kevin told us that Taittinger are based in Reims, once the royal capital of France and it was here that Clovis The First, the first Christian king of the Franks, was baptised. During a  chat later on, Kevin told me of a theory that the name Clovis “mutated” into Louis, the name of many subsequent French monarchs.

The fact that the kings were in Reims meant the local wine became the royal wine and that gave it quite a boost. Whenever there was a celebration in court, the local were an integral art of it and so Champagne became associated with all kinds of celebration.

We’re jumping about 12-hundred years here, from 500AD to 1729 when the first champagne house was founded. Taittinger was founded, though under a different name, in 1734. “It is still run by the family and that’s pretty unique,” said Kevin. “They are adamant on quality as their name is on the bottle. With champagne, there is nowhere to hide - flaws will be obvious - it has to be perfect.”

He told us of a constant battle between the accountants and the winemakers, with the accountants keen to move the champagne faster, the winemakers standing firm and refusing to let it go until it is perfect! “Luckily, we own about half the vineyards we need. Land in the Champagne region can cost one million euro per hectare!”

“We sell about six million bottles a year, only a very small percentage of the market.” He said the Imperial was an ideal match for the family “and the only partner we’re aware of who are doing a tasting flight.”

We started with the Brut Reserve NV. “the one with the white label. This has been in the cellar for three years. There’s lots of Chardonnay in there in this clear and crisp wine”. A very elegant cuvée indeed.

The Rosé was another winner. Kevin explained: “There are two ways of producing rosé. Leave on the skins is one and that makes a heavy style, not one that we want. The second method is to make a red wine and add it to the mix. So twenty per cent Pinot Noir wine is added. We use clear glass in this bottle to show off the colour.” 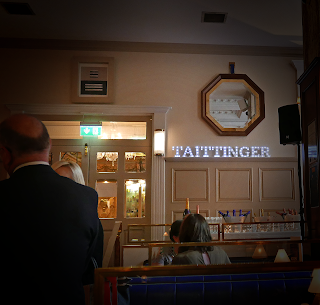 Champagne, as we were finding out thanks to a selection of tempting canapés from the Imperial's kitchen, “is unbelievably versatile. You can use it right through the meal, from starter to dessert. This Rosé, three or four years in the cellar, has more body and flavour, again lots of Chardonnay there, and can cope with a bit more flavour on the plate.” The Imperial paired it with crab, ginger and mango and with Prosciutto di Parma, basil pesto.

Time then for the Nocturne with its purple label, designed for the evening. “A little bit softer, sec means off dry, next category up from brut, ideal for late in the evening.”

He explained the difference between brut and sec in sugar terms. “The brut and rosé have 9 grams per litre, almost dietary! This sec has 17.5 per litre, still very low in Champagne terms.” No shortage of sweetness with the delicious pairings here: Lemon Tart, white and milk chocolate desserts.

As the tasting drew to a pleasant lazy end, Kevin said Seventy Six on the Mall was a fantastic venue. “We are delighted to be partners here.” Frits thanks Kevin for coming and promised that this would be the “first of many tasting evenings”.

While we were in Seventy Six, we decided to try something from their Irish tapas menu. The Duck Liver Paté with port glaze and toasted brioche (7.00) was superb, creamy and full of flavour. And another that I can recommend is the Pan Seared Scallops with Jack McCarthy’s Black Pudding (9.00), a by now classic combination with top class local ingredients. Quite a wine list here too. Quite a bar on the Mall!